Hitting all the crowd levels in one trip!

Planning our first Universal trip. We’ll have four days in the main parks, so that’s plenty of time to do all the things. Honestly, everything. My kid thinks she’s too cool for the Dr. Seuss rides, but I AM NOT. She’s also a total daredevil and intends on riding all the big coasters, even if I take the chicken exit. I do think we’re too tall for the Pteranodon Flyers, unfortunately. It’s been a while since I’ve measured her slouching.

Crowd levels on our park days are 9, 8, 5, and 3, so we have all the crowds right up front. We’ll have express passes the first three days. What attractions would you postpone from the busy days to the lighter ones?

We’re planning on getting an interactive wand in Diagon Alley. Is that a good busy day activity, or does the place get too mobbed to enjoy? I’m thinking the wand won’t come back to the parks after the day we buy it, because I’m told they don’t always fit in the tiny lockers at the bigger coasters.

The only wand I have had trouble fitting into the locker was the Elder Wand. That wand is a bit longer and it only fit in the locker on a diagonal. Actually, it was the box that was the problem. When we came back the next day with just the wand, we had no issues putting it into the locker.

They were clever enough to take the locker sizes into account when designing wands. They typically fit with their boxes included.

I’m going to recommend a sling bag to carry around the oarks. They are the exact size for the free lockers. I can carry a water bottle, phone battery, phone, sunblock and a few other misc items.

I swear by these Lands End drawstring bags.

They are big enough to hold lunch and snacks for each person, and a water bottle and wallet, but not so big that they get too heavy to carry. I have never had an issue fitting this into the lockers for Hulk, Rip Ride Rockit, Mummy, or any other ride with the small lockers. Also the strings are wider than other string backpacks, so its more comfortable to hold and wear.

Shop our Kids Packable Drawstring Bag at Lands' End. We fit every body

You can do everything in 2-3 days with express passes, so no need to postpone anything!

We got wand holders (straps wand to leg) off Etsy so we weren’t dealing with boxes and everything fit just fine in free lockers.

Is that a good busy day activity, or does the place get too mobbed to enjoy?

It is best to do the wand spells early. As you approach 11 am or so, the place is so mobbed, the crowds and lines just to do the spells gets to be overwhelming.

Last trip, I actually got up early and took my son to Diagon Alley at opening JUST to do the spells. So much better.

Having said that, you CAN do them later in the day as well…just know the crowds will be much more significant.

I’d put off Hagrid’s and Velocicoaster to days 3&4, when crowds are lighter. They don’t take express pass, so there’s some extra synergy for you on day 4, when you don’t have it anyhow.

Thanks, this is exactly the kind of useful information I didn’t know!

I’m so glad to hear the wands fit. I was worried about it because I’d specifically read otherwise. I don’t want to tell my kid which wand to buy because it doesn’t fit in a locker, but I have no problem making her throw out the packaging if it comes to that.

Keep the box! It’s a great way to store the wand while walking and when you get home! 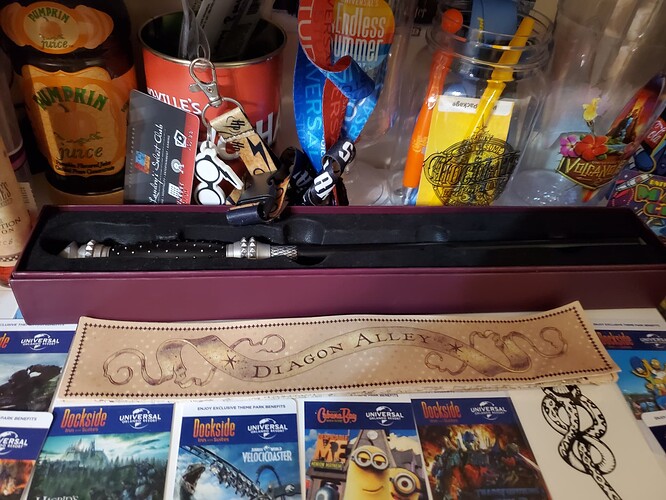 This was notes I made before our first trip from research

That’s probably the best and most comprehensive WWOHP guide I’ve ever seen!

fit in the locker on a diagonal.

You could say Diagon Alley

I think we had issues in Hogsmeade though

Thank you so much for all these tips! We will be trying every single one of them!

OMG Grinchmas Who-liday Spectacular! This is not in any of my touring plans, and I must see it! Should I go on a crowded day or a slow day?

It’s a big theatre, so would be fine on a busy day. Especially as a mid day break.