Help Me Pick a resort and give me all your thoughts :)

My husband and I are thinking of booking a trip in early December 2020 (Dec 1-5 possibly). We’re trying to go a budget-friendly route and considering a few resorts that seem to be the lowest price at the time. Our goal is to get away, enjoy the parks during the holidays and destress for a few days together. If French Quarter was open, I feel like that would be a great pick for this trip. But since it is not…

If you pretend prices are equal, which resort would you stay at? Give me some of your thoughts on pros and cons of each: Pop vs Art of Animation vs Caribbean Beach

Some of my thoughts going into the decision:

Skyliner- is using the Skyliner a perk? (I haven’t been since Skyliners were available) Or would taking a bus be more efficient? Is Caribbean Beach a better position (less time) than the other 2 resorts if using Skyliner?

Buses- Does one have less internal stops or less frequent stops when going to and from the parks?

Dining- We will most likely grab food and eat in our room if not eating in the parks to avoid crowds. Is one resort better for this? (food options, crowding)

Thanks for any advice! If you have a better pick for us, feel free to share!

Both have one main bus stop only. If you just want a regular room, I’d say pop because you have more location options. At AoA, only the Little Mermaid section is standard rooms. The rest are family suites.

For adults looking for a nice place to stay on a budget, I’d look for Priceline deals on Swan/Dolphin. That is a fantastic resort, great pool, great restaurants, perfect location. No magical express if that’s a deal breaker.

I’d say pop because you have more location options. At AoA, only the Little Mermaid section is standard rooms.

Which room would you pick at Pop? Preferred?

How would you compare The Little Mermaid rooms to a Standard room at Pop?

I haven’t stayed in LM or at Pop. I’d probably pick the closest standard room to the Skyliner at Pop.

Also, I’m not sure if the LM rooms have been renovated yet. Pop is all queen beds I think.

Also, people always complain about how far away everything is at those resorts. Its not that bad. 5 minute walk from the furthest rooms to the main building. And you’ll be there in nice weather.

Walking to epcot for dinner, is SOOOOOO convenient

Pop is all queen beds I think. 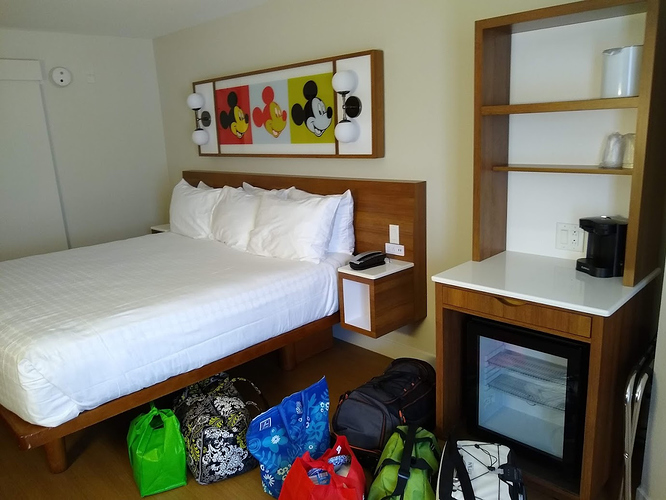 This was our King room at Pop.

I also suggest Pop. You’ll have access to the Skyliner, which is great! And since you are a Liner, you know about room requests and can pick a room either closest to the main building or closest to the Skyliner. The main building and skyliner are pretty close together, so any room in that area should be good. There are standard rooms all over the map, so you shouldn’t need a preferred room.
Also, the layout is big, but not as big as some people suggest. I stayed at one of the far rooms a while back, and the walk wasn’t THAT bad. But I would prefer a shorter walk at the end of the day for sure.

For the Skyliner, CBR is the most convenient because it’s the hub station where all lines converge to go to Epcot and DHS. If you’re trying to make it there for rope drop, then from AoA or Pop you’d have to go to the CBR station and get in line to go to EP or DHS – and the lines can be very long at that point. CBR cuts down the time a little bit. Overall, I think the Skyliner is a perk but just keep in mind that from those resorts, it’s the only way aside from Uber or Lyft that you can get to EP and DHS.

For bus transportation - I’m not sure that bus transportation at any resort is better than another. CBR is big and the buses were a bit of a frustration on our last trip last month. But I’ve heard bad things lately about the bus service from Pop, so I doubt this is just a CBR problem. YMMV.

For rooms - Pop has the nicest rooms because they’ve recently been refurbished. While the main building at CBR is new and the food court was redone, the rest of the resort hasn’t been refurbished since about 2015. The rooms there are nothing special and I don’t think that they are better than rooms at Pop. For AoA, the LM rooms are in the process of being refurbished but only a handful of them have been done. Chances are you’ll get a standard room there that still has full-size beds. If this is an issue for you, then AoA should probably be off your list.

Food - By all accounts, Pop food court has been a little crazy and busy since reopening. But from Pop you can also simply walk over to AoA to enjoy the food court there, too. CBR has a pretty good food court and it’s not been busy the two times we’ve stayed there since July.

I mean, the only thing I think is not great about Pop is that you have to go to the CBR skyliner station to then transfer to Epcot or DHS and that is going to cost you time. But that’s really only an issue for rope drop, so if you don’t plan on being at the parks right when they open, then it’s a moot point. And transportation overall isn’t that bad as long as you aren’t trying to get to the parks first thing.

This is all extremely helpful, thank you.

With the limited hours, limited capacity, no Fast Passes, wanting to avoid peak crow gathering, etc… I haven’t fully wrapped my brain around a daily schedule yet. I need to do more research and Trip Report reading. However, Rope drop is in my blood so I would say YES we will. Unless there’s an argument for waiting until Skyliner lines die down later in the morning… The podcasts I’ve been listening to seem to suggest still getting to the parks early (especially Hollywood Studios) so that is most likely what we will do to knock out some rides first thing.

If you’re typically a hard rope dropper staying at Pop, What would your plan of attack for the skyliners be from your experience? Get to the station as soon as it opens? Forget it and take a lyft? Leisurely stroll in an hour after park opening?

I can tell you that just a couple of weeks ago, getting through the skyliner line to get to DHS for rope drop took about 45 minutes. You’d have to add time to that for waiting at Pop, then waiting again at CBR. If you wanted to make it by rope drop, I’d just Uber. But the parking lot wasn’t opening until 9:15 either, so that won’t get you there too early. You could also Uber over to the Swan and Dolphin and walk from there if you wanted to try to get there as early as possible. It’s all so complicated!

I have a pop preferred for early December. Requesting a King. They have them. I’m requesting sections/ rooms that are about halfway to skyliner and main building (where busses are). I like pop. Also, I qualified for a discount which was nice. I like the 50’s theming.

That all makes sense. And you’re right, I’ll have to figure out transportation depending on what park and our daily plan. Good to have options!

I didn’t like POP… the rooms are small due to the queen beds. The food court is meh. The CBR has more food choices. Since parks are closing early you do need to consider dinning options in the evening. I might consider the great deals w/ the Swan & Dolphin resorts. They are within walking distance of the Boardwalk, Yacht & Beach Clubs. You’ll have lots of evening dinning choices w/in walking distance with the added benefit of being able to walk to EC and HS.

I can tell you that just a couple of weeks ago, getting through the skyliner line to get to DHS for rope drop took about 45 minutes.

The day we tried to take Skyliner to DHS from Pop, it was 56 minutes.

Skyliner is not reliable transportation…you might end up on buses if there is lightning or some other undetermined reason. (On two of the mornings we were there, we had a message left on the phone that announced the Skyliner would not be opening that morning, without giving any actual reason.)

You guys are so helpful, AS USUAL. Sounds like I need to do some research on Swolphin. I’ve always bought the resort/tickets as a package directly from Disney, so I’m a bit nervous at the idea of getting the resort on Priceline (or otherwise) and tickets from Disney (but I love me some savings!) … any tips there?

Adding a vote for Swolphin. Wrapping up our stay there and I’ve been so pleased with it.

Location is perfect, but much cheaper when you find a deal va the other Epcot resorts. Walking to two parks is a game changer, especially to beat RD crowds and not have to worry about transportation schedules. Once more starts to open, all the dining options with the Boardwalk and other resorts (or even taking Skyliner over to CBR or Riviera) would be easy.

You don’t get the DME, and watch out for the rate since it doesn’t include the $30Ish/day resort fee. If you’ve got questions, let me know!

I’d also check out rates directly through the hotel on Marriott as well as Priceline. The AAA rate this week, for example, was ~$135/night.

I’ve always booked tickets separately and never had issues connecting with a stay or anything like that.

Adding a vote for Swolphin. Wrapping up our stay there and I’ve been so pleased with it.

I’ve been following your trip report and LOVING IT! I think you guys have a vehicle, and we will not. But walking to Epcot & HS would be great for us.