Hi guys, I am a big time lurker occasional poster currently stuck in hospital (nothing major just an unexpected admission). Since I won’t be going back to the world anytime soon (my 2016 trip was a ‘once in a lifetime’ kinda deal although since I went back to dlp last year an am heading to cali in September I suspect a @profmatt style second trip soon) please help distract me from my current situation with any funny pics/stories or favourite memories of the world. Thanks!

Here’s the Mother In Law thread. Good for some laughs.
https://forum.touringplans.com/t/the-mil-thread/3209?source_topic_id=43634

Here’s a trip report I liked.

And this is my favorite.

The secrets. The planning. The missteps. The victories. The second thoughts. The financial freakouts. The insider tips. The waiting. The daydreams. The waiting some more. They all finally led up to the glorious day when DW and I led our kids (DD19 & DS14) on their first real vacation and the greatest adventure of their lives. To catch you up on the backstory, read this. And don’t miss the beautiful – and hilarious - moment (caught on video) when we reveal to our kids their awesome vacation …

Back in 2000 we had a family trip. My sister was about 23 at the time, and she’s always been mad for Tigger. We were in AK and my mum saw him with no line and made her go over for a pic, but she was embarrassed because she was a grown up. She was giggling and hiding her face, and waving us away to stop looking at her, and unbeknown to her, Tigger was behind her copying her - we were all in hysterics but she thought we were laughing just because she was doing something embarrassing which made her worse, and so Tigger got worse too. I don’t think we even took a picture in the end, we were laughing too much. He was just like her!

Haha I love this! My recent trip to DLP one of my priorities was meeting Darth Vader. I wore my rebel alliance dress and my DV cardigan and was stoked. My 62 year old mum? Not so much. She was I insistent she was only there to take photos. Darth was having none of this and basically intimidated her into the photo 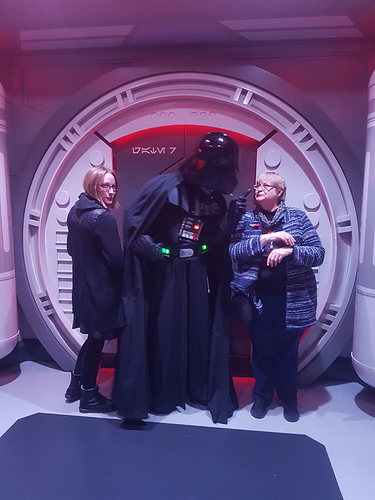 Oh my. Thanks for the laugh! And making me glad I’m not married

That was an awesome distraction. Thanks x

Two things, not really funny, but memorable moments for us.

First was on our honeymoon, almost 23 years ago. My wife and I were at the Disney Marketplace (aka Disney Springs now) doing some shopping and checking out Pleasure Island. Well, since neither my wife nor I are party people, nor did we drink, we figured we’d just experience one of the clubs. The place was so loud that our initial attempt to enjoy a treat on patio was lost to the noise. We headed into one of the murder mystery clubs and lasted all of maybe 10 minutes before we could tell this wasn’t our cup of tea. Pleasure Island just was not pleasurable at all. So we then meandered through some shopping in the Marketplace area with my goal of finding a Disney ball cap. While in a shop that had a wall full of hat options, one the cast members asked us what the occasion was. We told him we were on our honeymoon. He then looked at us both up and down and seemed genuinely shocked. “Why would you be anywhere but in your hotel room?” We were a bit taken aback. I mean, yes, the honeymoon is where you “discover” one another in that way…but seriously. Why would we come all the way to WDW if we were going to just lock ourselves in a hotel room?

Second, on our most recent trip to Disney (about 2 1/2 years ago now), we were in Fantasyland taking our youngest to the carousel while the older kids were off doing something else. While in line, this prim and proper woman and a dirty man got in line. My wife grabbed my arm and squeezed. “Don’t look now, but I think Mary Poppins just got in line!” Of course, I looked and confirmed that it certainly looked like her and Bert. My wife was as giddy as a school girl. She could hardly focus. We rode on the same carousel as Mary Poppins and Bert and I thought my wife was going to pass out from disbelief. It was MARY POPPINS! In the flesh! Once the ride was over, she and Bert were whisked away by what I presume were their personal security team. To this day, my wife insists that it was the REAL Mary Poppins!