Am I the only one who thinks that Disney should make walking paths along the gondola routes and the new HS entrance road? I’m looking at where they have cleared the ground for construction of the Gondola, and it would make great walkways to get to HS and EP! I always thought it would be nice to be able to walk from AoA to HS, and CBR would not be a bad walk to HS or EP. I think each of those walks would be a mile or less, basically the same as walking to HS from the Boardwalk resorts.

it sounds like a good idea, but I think this would require multiple pedestrian bridges and put people a little more “in the wild” than Disney is typically comfortable with

I like the idea of walkways. If the Gondolas are planned to replace buses (when the weather allows it), then I know if I had previously had any intention of staying in those resorts, I wouldn’t. I’m terrified of the Gondolas. But once they open, does Disney intend to offer buses as well? Seems like that would undermine the point of having them.

I find it unlikely they will replace the buses, especially if there are no walkways. Lots of people will be afraid to ride them, and that would drive people away from those resorts, as you said.

As I said in your transportation thread, I prefer walking to waiting in line. The best case scenario for me is to be able to see how long the line is for the Disney transportation without going out of my way. I liked staying at the Swan and Dolphin because I could look to see if a boat was coming/going or if there was a long line of people, and if I thought it would be more than a few minute wait, I could just keep walking.

I think if they added walkways like I described, they could probably reduce bus service to those resorts without too many problems (except for the people who don’t want to walk or ride the Gondola).

I agree with you that Disney should add more walking paths. I’m always surprised when I look at the map and realize how close many resorts are to Epcot that only the BC/YC/BW are the officially walk-able Disney resorts.

Also, I read an article - or maybe a post - about how Disney came to build the gondola. Apparently they hired a city planner who reviewed their current transportation options and basically said “more of everything”. More transportation options. So I don’t think they’ll be getting rid of any busses.

Any chance you could share a link to that article @AlyQ?

I mean, I wouldn’t object to some of those moving walkways like at the airport, but a regular sidewalk would be fine.

I’m sure there are other examples of it but Hong Kong has an outdoor (covered) escalator so moving walkway sounds do-able. My problem would be all the people just standing on them. It’s not a ride - it’s a chance to get there twice as fast - walk!

DThe gondola was the cheapest option from CBR to IG.

The original plan was a water link, aka a new canal. That was too expensive, plus there were issues over the fact that the canal would have entered by the fireworks storage area (obvious big risk) and the boats would have had to come through by the African outpost, so that walkway would be closed every time a boat arrived! Or have everyone disembark backstage, by aforementioned fireworks. Plus it would have had to go over or under the road around the back of Epcot (behind Norway, China, Germany etc), which is the emergency access route - the fire station is there too.

Buses are not used to duplicate other forms of transport from any other escorts, other than WL and FW. That is likely due to capacity issues, especially for ECVs which cannot go on the smaller boats. But the monorail resorts do not have buses to MK and Epcot if the monorail is down. The Epcot area resorts do not have buses to Epcot and DHS except when the boats are down.

And the business plans explicitly stated the cost would be covered by NOT having buses to Epcot and DHS from the gondola resorts. So no buses are expected, unless the gondolas are down for a significant period of time.

And the business plans explicitly stated the cost would be covered by NOT having buses to Epcot and DHS from the gondola resorts. So no buses are expected, unless the gondolas are down for a significant period of time.

Years ago, when Walt Disney was first looking at putting in a monorail, the first design was something more akin to the Gondola…it was a hanging monorail. But after test-riding the concept in Germany (I think), Walt’s wife protested, saying it made her feel sick (the swinging, apparently). So, the monorail design was revamped to ride on TOP of the rails instead.

So, there is a bit of irony in the fact that, this many years later, they are going to a design similar to that which Walt himself agreed was ultimately a bad idea.

Ugh. I’m getting dizzy here thinking about it. Gotta go think of something else now.

Maybe I’m confused about what path the gondola’s are taking to get to Epcot. I know they are coming from CBR and ending at the International gateway. They aren’t actually going to go across the world showcase to get there, are they? I just assumed they would stay outside the existing park perimeter. I would think there would be a fairly cheap/easy way to get a walking path to connect up to the Boardwalk Inn parking lot area and from there it would be very easy. No new entrance required.

But as far as getting to HS is concerned, it should be really easy and I would think that with the upcoming opening of SWGE, any additional means to get people to/from the park would be considered. 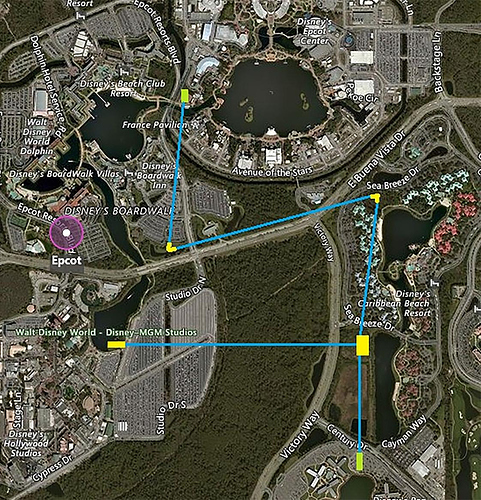 The gondolas won’t cross World Showcase, but they will skirt the back of the France pavilion (enough that the perspective of the Eiffel Tower will be an issue with the cabins going past).

But CBR and Riviera are kind of behind Italy so a walking path to the IG would be a lot further than direct to the nearest point of Epcot. The obvious place would be somewhere between America and Italy I guess.

Now given how many people take the boat from the Boardwalk or Beach Club to the IG, anything more than a 5 minute walk is apparently far too far to walk to get to a park.

And of course Disney is notoriously risk averse.

Fair point about people not wanting to walk. Sometimes I forget about all the people complaining about walking so far at AoA to get to the bus stops. I just like having the option, especially when the weather is nice. If one mile of walking is too much for someone, they’re going to have a tough time at Disney without a scooter or stroller. In the morning at least. I have definitely been exhausted at the end of the day and just wanted to sit down in air conditioning. But if the choice at the end of the day is stand at a bus stop or gondola line for 20 minutes then spend 15-20 minutes getting to my hotel vs just tough it out and walk back in 20 minutes, I’m walking.

I haven’t seen the business case so I didn’t realize taking the buses away was under consideration. It makes sense - and would certainly be better for the environment based on the little I’ve read of the gondolas.

No way no way in H*ll am I taking a gondola. I’m scared of heights and even more afraid of falling. I know I would get on one and some jerk would start jumping up and down. They don’t have AC and it will get stuck with me on it.

Now walking paths no way too many snakes in that part of Florida not to mention the gators. Remember the little boy who got killed several years ago by one of the resort lakes. Just think of all the garbage cans every 30 feet. I think it would be to much maintenance for Disney to keep up with.

I wish they had expanded the Monorail system but that would cost too much.

Boats cause water pollution which is why Sea World does not have a ski show anymore as well as many other parks.

Everything I’ve read points to the gondolas replacing the busses completely at those resorts for DHS and Epcot access. In fact, it’s rumored that it’s a goal of Disney’s to drastically reduce, if not eliminate, the busses. They are extremely inefficient (the Gondolas will be able to transport far more people per hour than the busses currently are able to, and in a continuous fashion rather than 20 minute intervals), expensive to operate, and not environmentally friendly. So I think we may see more alternative transportation options at different resorts in the future, but I also suspect we won’t be seeing busses to Epcot and DHS from those resorts come this fall.

Also as far as walking paths - as nice as they are, if they are too long, they just don’t get used. Short ones do - the Contemporary to MK, or YC/BC/BW to Epcot. But long ones don’t. This week we walked to DHS from BC for rope drop (left BC around 8 for a 9 AM opening). We saw about 3 other people on that path at all.

I think a lot of people just don’t realize the path to HS is there. A few year ago I was waiting for the boat from the dolphin for morning emh and after a few minutes decided to just walk. The people who were also waited had no idea you could walk there and joined me for the walk when I told them how far it was.