I’m going to WDW and Universal next week, and I have used the Touring plans to map out each day I’ll be there. Two big questions/complaints though with this subscription:

So this all boils down to my general problem of things being too chopped up. I have to completely separate the disney and universal trips as a whole, and I can’t even access the second trip from my dashboard (meaning it is useless), and the touring plan in universal is unnecessarily clunky if you want to go between the two parks.

Suggestions? Aside from my piecemeal trip that I have now?

Email webmaster @touringplans if you aren’t happy there is a 45 day money back guarantee.

I was actually just wondering if anyone knew work-arounds for these problems. I’d rather solve the problems or give them feedback on how to improve their product. I love the personalized touring plan, I just think there are some glitches that are worth looking into….

I’m with you. I love TP! And I’ve noticed the same thing. I would like to make a single-day touring plan that park-hops. But that ability is not there. I’m sure what we are asking for is crazy complex to program. Honestly, I’m amazed they’ve done what they’ve done so far!! But adding some hoping to the plan would be cool.

Thank you for posting. This is exactly the issue and question I had as well. Hopefully that feature can be added or improved?!

Are you talking about your dashboard from the app? From a browser I can easily go back and forth? 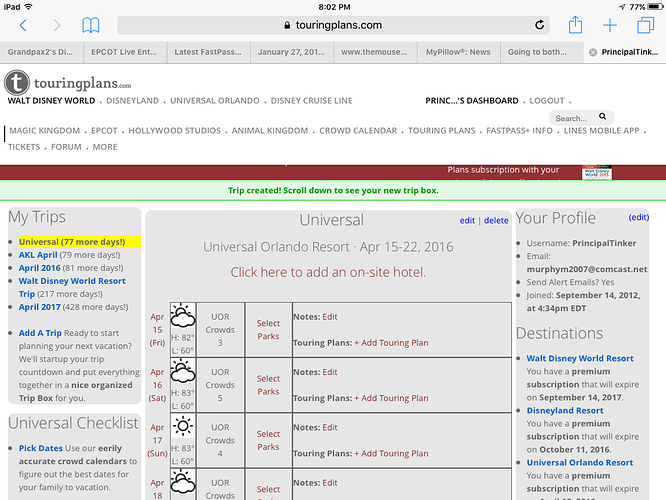 By clicking on the left? (I just added a fake trip)

Edited to add that you can click through the homepage on the app to each trip on the bottom of the home page? Is it that you want to see plans side by side?

I had to create ten different travels because we hop from wd to usf. It would be great to be able to make one 14 day long travelplan including both wd and usf/ioa worlds.