I was skimming through Twitter this morning and noticed this thread by Carlye Wisel that included the following:

So I jumped over to the Disney website and found this: 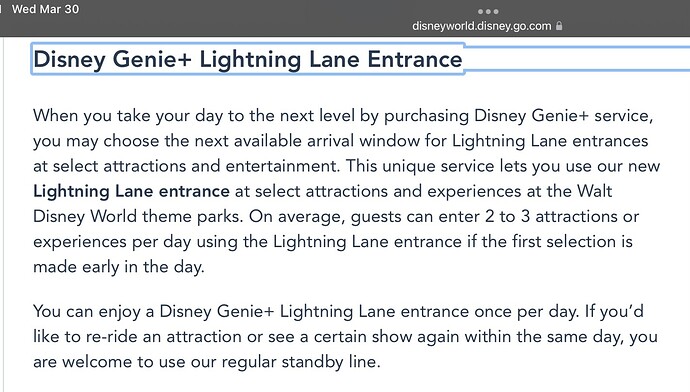 Do you think this is because so many folks have complained about the number of LLs they have been able to get? Are they reducing the number available? Because I only used it a couple times and was able to get more than 2 or 3. Based on Carlye’s post, it makes it sound like this is new language.

It is new language, I saw it discussed on chat this morning. I definitely think it is due to complaints, people probably expected to use it on every ride since they were paying for it.

That is ver interesting. I don’t think they are reducing the number you can get, just reducing expectations.

I think there is no way people.only get 2 total, but I am quite sure people only end up with 2 that they want - especially at AK and EP. Which is not different than FPP with rhe tiered system - but that system was free - so expectations are definitely different.

Scott Gustin is posting DL does not say the same thing:

@ScottGustin
Walt Disney World added a new line to the Genie+ Lightning Lane website: "On average, guests can enter 2 to 3 attractions or experiences per day using the Lightning Lane entrance if the first selection is made early in the day."

@ScottGustin
FWIW, the Disneyland website does not include this line -- it says: "When you take your day to the next level by purchasing Disney Genie+ service, you can select the next available arrival window for Lightning Lane entrances at select attractions, one at a time, all day long."
2 Likes
missoverexcited March 30, 2022, 12:14pm #5

It’s different there isn’t it because of the number of rides and proximity of the parks. That’s why everyone loved MaxPass there. It just doesn’t work at WDW.

The use of “On average” in that sentence is key, because it recognizes there are outliers…those who know how to use the system well. But if that number is accurate (and I suspect is more about setting expectations than an actual analysis of “average” number obtained by guests), that means there are those who pay for it getting only 1 or 2 to balance out those getting more than 3.

I’m a broken record on this. Stop paying for Genie+! (Won’t happen, I know…but seriously, people need to stop supporting this “product”.)

ETA: It occurs to me that they aren’t using “average” to mean, well, “mean”…but perhaps to mean “mode”.

Yes I do think the change in language is to be more transparent than they had been previously.

Give it a minute. I’m sure that will update as well.

This is also true.

Maybe this will discourage people from using it and free up slots. Or maybe - big maybe - they are staring to hear pushback and thinking of changing the system. Just bring back the old FP+ and charge for it.

The problem is, they are using that platform for park ressies.

They’ve painted themselves into a corner.

Just bring back the old FP+ and charge for it.

As much as I hated FP+ as well, I actually agree with you that this would be a better alternative to G+.

There are other ideas as well…but going with that, when you book (or ahead of your stay), you can decide whether to pay for FP+ ahead of time. On-site guests could still get a headstart advantage in the booking window as before. Charge $15 per day/per person, and then people can pre-plan their FP+ as before in the very least! But, if we end up with pretty much everyone paying for it, we once again have a case of too many people using FP+, overwhelming the standby lines. So, maybe instead only allow 2 pre-booked FP+, and then after that, you can get additional same-day if available (but unlikely).

I DO think the ability to pay for ILLS might be okay to keep, as in the very least it deals with the mess that they had before with cases like ROTR, and the VQs and BGs, etc.

This. I always said I wouldn’t pay for FPs but given the option I would much prefer to pay for the old FPP system as it was than pay for G+.

Yes IL isn’t bad. And yes perhaps they at least let you book 1 in advance so you can at least plan your day and book 2 more day of and wait for those slots to expire like before. At least knowing your main ticket item for day is huge and not having to stress at 7am daily on your vacation.

This was their plan all along. Get us to hate it this way so we’ll happily pay for it the old way

Well if they are changing it back I hope they do it in the next 40 or so days!

I’m a broken record on this. Stop paying for Genie+! (Won’t happen, I know…but seriously, people need to stop supporting this “product”.)

not enough ppl are informed to make this happen

This was their plan all along. Get us to hate it this way so we’ll happily pay for it the old way

I’m not a real conspiracy theorist but I think you are right on the money here. I suspect there are other iterations that were to be introduced in phases. I could totally see a more expensive overlay be added that is more like FPP was. I totally believe that.

I have to say that I have stuck to my decision to stop supporting this ‘product’ entirely. For the first time in more years that I can count, not only do I not have multiple trips on MDE, I have none. My annual pass expired this month and I have 3 days left to renew and I won’t be doing so. Genie+ is one of a long list of reasons for doing so. I’m only one person and I know attendance is soaring, but I can’t imagine I’m the only one who has reached to their breaking point with Disney. (I do, however, have 4 trips on the books at Universal!)

Please do email Disney and tell them this!