This question is completely dependent on the future of the park reservations system, but curious if anyone can speculate on how it might operate…

I believe Early Entry for on-site guests is currently suspended… (??)

When they do resume it and you are staying at GCH how do you get back & forth between the parks / hotel?

For Example:
If I have a park reservation at DLR, do I have to walk around DCA instead of walking through it? Can I do EE at DCA and then go to RD at DLR using my park reservation?

If I’m at DLR and it’s not 1pm “hopping” time yet, how to I get back to GCH? (Kind the same question as before, but in reverse!)

This may all just be a thought exercise as I’m so far away from my trip… Any answers / speculation / insight from our DLR folks would be appreciated!!

There’s an entrance/exit from GCH to DTD. You would use it and walk through DTD to/from DL. You can also enter DCA via this route if the direct route from GCH is backed up. But can only enter DCA if you have a reservation for that park, or have park hoppers.

Is this the route?

I was excited about how “easy” it would be to cut through the parks if I stayed at GCH. With the reservation system that’s not really as possible except on the one day I want to be at DCA all day.

Hmmm… Maybe I should just stay at DLH after all if I have to go through DTD anyway??

Where you enter GCH when you first come from the main entrance, there is a hall to your left where I believe the conference rooms are (and an ATM in that direction). You go down that hall and there is a security entrance to DTD after you turn right at the end of it. It’s about a 5 min walk to the front of Disneyland entrance from there. You just turn right when you come thru security and into DTD. It’s super fast and convenient. I have never gone through DCA to get to Disneyland. I’ve always gone that way to get to and from. I think it’s probably about the same walking time either way. 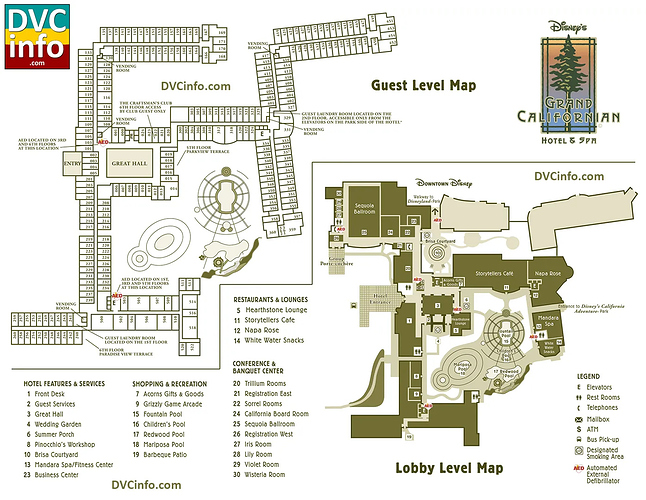 You just turn right when you come thru security and into DTD. It’s super fast and convenient. I have never gone through DCA to get to Disneyland. I’ve always gone that way to get to and from. I think it’s probably about the same walking time either way.

That’s reassuring! I’ve bookmarked the map!! Awesome!! Having never been there I can only see what it looks like on Google maps!

I will be interested how the park reservation system is going to work with EE. It’s easier to manage at WDW because the parks are so spread out. My guess is you’ll have to go to whichever park you already reserved.

So see the Hotel Entrance, go left in that hall right past the bathrooms, you turn right around the courtyard at the end of the hall and then left through that first left turn. I doubt with 1pm park hopping that you’ll be allowed to go through DCA to get to DL. So I’d do this on DL park reservation days.

Like you I’m waiting on that information for our Oct trip about EE. I haven’t seen anything saying they are doing EE yet though but it seems like most other things are or will be operating like normal by Oct so it might be back. I think your trip is further out so yes I’m guessing that it’ll be back and if the park reservation system is still in place you can only use EE for the park you have a reservation for. In the past that was TTHSat for DL and MWFSu for DCA I believe if you want to try to book things that way with your park reservations.

That’s my guess too… Which is really makes the EE not as attractive. I’m going Mon. - Fri to avoid crowds.

During my trip that means DLR only has EE on Tues. & Thursday. I’ll definitely reserve those days, but I don’t really want to be “stuck” at DCA until 1pm the other 3 days because I took advantage of EE…

So that means I have to “skip” that benefit if I want to do DLR more or need to make sure I secure a RotR BG.

I don’t really mind the park reservation system, but hope that with the $500 - $700 per night we are paying that they’ll be a bit flexible with those guests so we can really use the benefit.

I wouldn’t do EE in DCA more than twice for sure so I’d pick another day to do DL, and remember more people get to use EE for DL because if you buy a 3-day park pass you get it and AP have it (do those exist anymore?) but for DCA only hotel guests so it’s a bigger benefit in DCA. I would definitely take advantage of it though as much as possible. I have been able to almost ride everything I wanted (BTMR broke down and we kept losing our ST FP because we couldn’t make it on time) on a crowd level 10 on a holiday weekend at Disneyland without EE using the MaxPass so if that’s back I highly recommend it. You should be able to take it easy with your 5 days and really enjoy yourself!

Thanks… Yeah… I’m going when it should be “off-season” and only in the middle of the week. (The first week of December)

Don’t get me wrong… I’m excited for DCA too. However, like WDW, the “main” park offers much more. I’ll definitely do EE at DCA at least once… More often in my original plans I wanted to be out of DCA by 10am most of the time and DLR the rest of the day. (Maybe one DCA night) 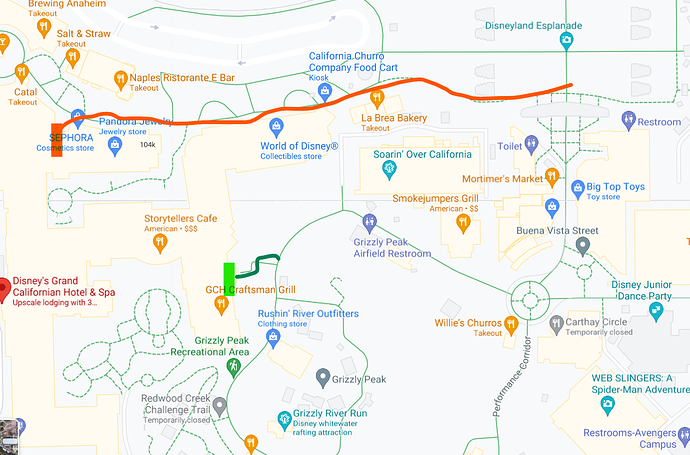 The orange line is the path you will use to get to the Esplanade (the orange block is the security setup in the breezeway).

The green block is the security entrance to get to DCA and the green line (is almost all within the park, because the turnstiles are literally right up against the building so technically you’re in the park as soon as you leave GCH. It’s pretty freakin’ awesome).

That being said, in normal times, the DCA/GCH gate would get backed up because it’s just so small and people would line up early. They do super limit it to only GCH guests (and if you have a receipt from that morning for Storyteller’s or Napa Rose bfasts you can use it too, but they check!). So it does help that they limit it, but just know that the advice has generally been to go the orange route for the morning anyway, even if you are going into DCA, unless you are super early (more than 45 min early) and arrive to only a small line at the DCA/GCH entrance.

I for one hope they figure out a way to allow hopping before 1pm. We SO missed hopping back and forth at will.

I would do at least 2 nights in DCA because a) Carsland at night all of it is just fun in neon b) Incredicoaster at night (and the atmosphere of the pier is really chill and usually very slow back there) c) the lighting in Avengers Campus particularly the Inner Sanctum is spectacular at night. But maybe being solo or just you & DW all that is doable with one night, especially in winter when “night” pretty much starts at 4:45 in Anaheim.

Cause I love maps so much, here is a diagram to show you what the walking paths would be from DLH (blue), GCH through DD (red), or GCH through DCA (yellow). The lines start at the lobby of GCH. 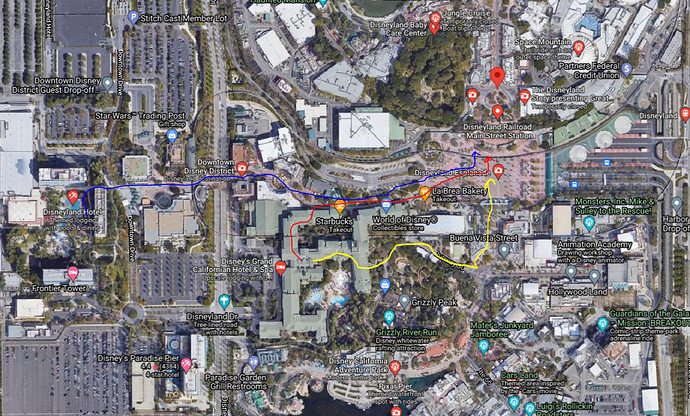 Since EE and park reservations have never been a thing at the same time, no one knows for sure what procedure is, but my assumption would be that you can NOT go through DCA if your park reservation is for DL, EE or otherwise, until after park hopping starts and assuming you have park hopper tickets. But the walking distance isn’t that much different if you’re going to DL, so I’d just go through DD to avoid going through turnstiles twice.

For extra morning hours you cannot go through DCA to get to DL if DCA isn’t already open and you don’t already have the reservation for it.

The map/path @lolabear_la posted is the best IMO. The walk from DGC to either park is remarkably closer than DLH or Paradise Pier.

The walk from DGC to either park is remarkably closer than DLH or Paradise Pier.

That’s what I’ve heard, but I didn’t really know the layout.

That map is very handy!!

It can be a little bit of a maze inside the GCH, I read about the shortcut long before taking it because you walk past a lot of convention areas of the GCH to get there (some of which if you use the ramps for the multiple small staircases you encounter can feel a bit maze-like). For us with strollers and never being guests there it felt intimidating the first couple of times we used any route through the GCH and to the breezeway.

Luckily you’ll be a guest AND now that it’s a designated security point you really just go where the most people are going (and follow the arrows on the signs toward Downtown Disney/Disneyland & you’ll do great!)

Thanks to everyone for the assist! Also for understanding that even though my trip is still 510 days away it’s never too early to start planning!!