10/7 – DHS. CL 8 (this was a CL 7 until yesterday) During planning, this is the only park we gave one day to. We mainly just want to do the Star Wars stuff. We’re a big nerd family. I had a consult with DH to decide between Fantasmic and the Star Wars: Galactic Spectacular and to decide whether or not to do the dessert party. Star Wars Dessert Party it is! We’re so dang fancy. We’ve got pins to trade with Jawas, so we hope to see some (I’ve heard the Jawas may be gone now, so we’ll see).

When I first planned our days, I wasn’t sure we’d be able to fill a day. I didn’t think TSL would have much of interest to us. I was picturing a baby roller coaster and some kiddie rides. Then I saw the cool videos of SDD and TSM, so, we have a full day planned. I couldn’t get a FPP for SDD, but expected that. It’s the only FPP I wanted and didn’t get. I kept trying, but never was able to get it. Our TP had us arriving at 10 and going to SDD first, but I was able to snag a 9 a.m. FP for TSM, so I’d adjusted our plan to a 9:45 am arrival. With DH’s back issues yesterday, he said he thought he needed more rest this morning. He said we could go on without him if we didn’t want to wait, but we’d rather go as a family. We’ll play it by ear this morning, but may have to cancel a few morning activities today. Luckily, DHS seems like a good park to do that in. We’ve got Path of the Jedi and Walt Disney presents scheduled for the morning, for example and a couple of free hours booked. All of our other FPP are after noon. Sooo, we’ll see what time DH gets going this morning and how he’s feeling. I WAS kind of hoping the Disney excitement got my guys up early for Toyland, but that doesn’t seem likely. I’d like to see Toyland at night, but that probably won’t pan out and I’m prepared for that.

I expect this park will likely be our most problematic for a couple of reasons. It’s the only park we are only at for one day. My motion sickness and DH’s back issues will be tested the most here. For DH, he’s currently planning on skipping RNRC and likely TOT. For me, I have concerns about both of those AND Star Tours.

I vaguely remember the DL Star Tours I rode in the 1990’s or 80’s. I liked it. That was before my motion sickness went up several notches. I’m currently leaning towards giving it a shot. As long as I don’t throw up ON other people during the ride, I’ll chalk it up to a learning experience. I have motion sickness patches, so we’ll get to test those out too. I may also have to take one for the team and ride RNRC if DSS doesn’t want to go alone. We have FPP for RNRC, TOT and TSM. I’m happy that we will end on a high note with the Dessert Party no matter what happens. https://touringplans.com/plans/print?id=3045008

We got to the park at about 10:05 this morning, just in time for our FPP to TSM to expire. DH’s back was a little worse today so we sat a bit more and got started a little late.

We walked to check out TSL It was a CL8 today and wow…the mass of humanity in TSL at 10am was astounding. You could barely move. SDD was at a two hour wait, backed up to where Walt Disney Presents is. TSM wasn’t much better at 90 min. We could have waited to do one of those but decided we’d rather not stand in that heat for more than a hour.

When I realized we absolutely were not going to make our FPP for TSM this morning, I switched it to Star Tours instead. That worked out great. So did my motion sickness patches. I can see why everyone gets sick on that ride! It was great and didn’t turn me green, but it was a near thing. DH went on it and loved it also. He said his back twinged a bit but it was worth it. It was his favorite ride. 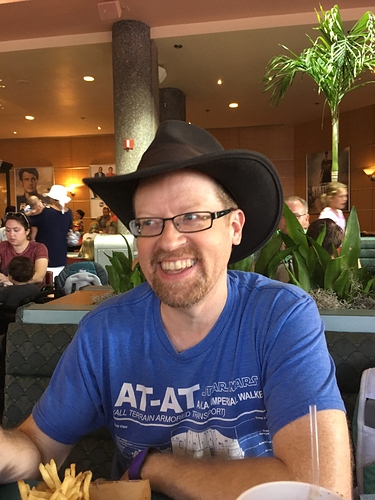 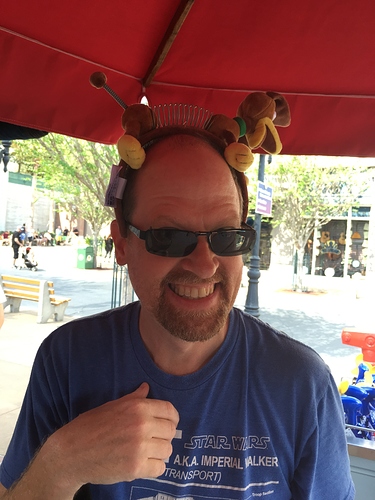 We did nearly everything else on the plan - Muppets, Indiana Jones - we loved that show! We ate a serviceable lunch at ABC commissary. We used mobile ordering, which was easy but the app is SOOOO SLOW. Still better than waiting in line though!

Then, we all did TOT. What great theming! I nearly had a heart attack. Holy cow. It was fun and also terrifying! Please excuse the watermark, I can’t get them off yet for some reason. 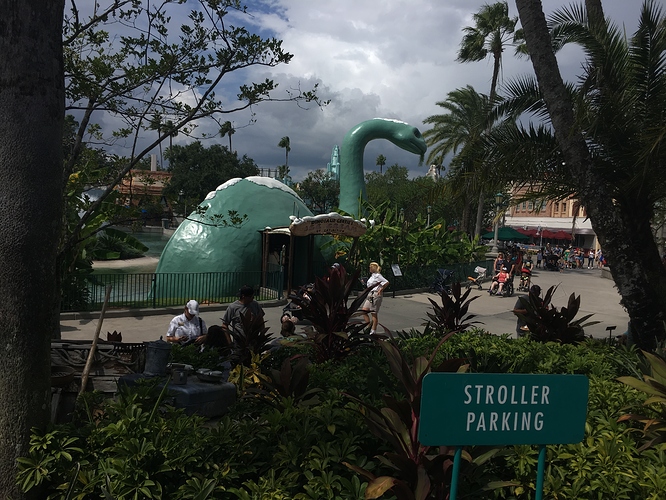 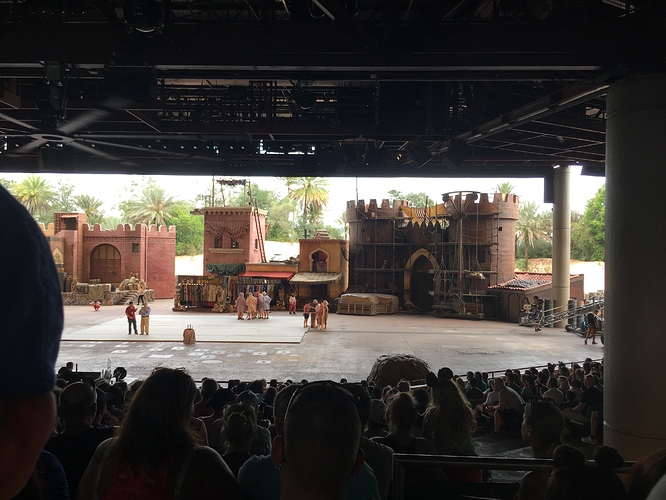 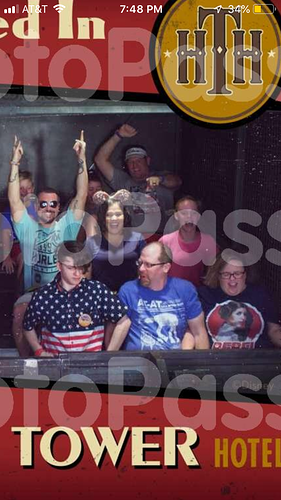 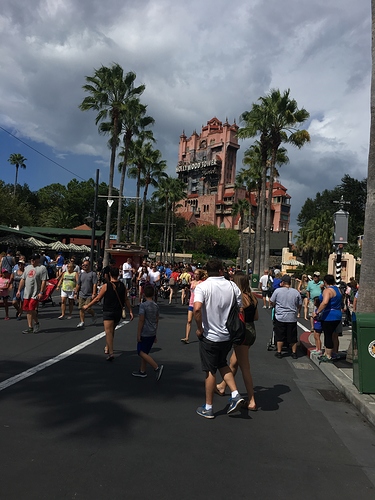 Then, there was a brief, intense rainstorm with thunder. We ponchowd up for our RNRC FPP. DH didn’t ride this one due to his back. I didn’t get motion sick and had a great time. It was DSS16’s favorite ride. Not that you can tell from the photo. 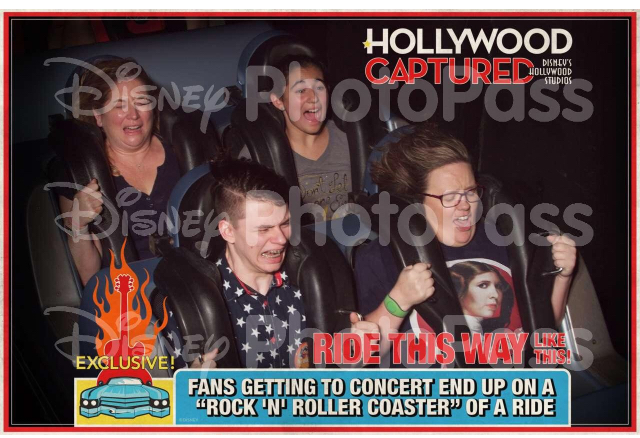 When we were done there, the rain had ended. We grabbed a hot dog from a vendor cart for dinner and I looked for a FPP. I snagged one for TSM again.

We went to Checkout the Star Wars Launch Bay first. I wasn’t sure whether we do that or not, as we had a dessert party, but I’m glad we did. We would’ve felt rushed if we waited until the party to see everything. 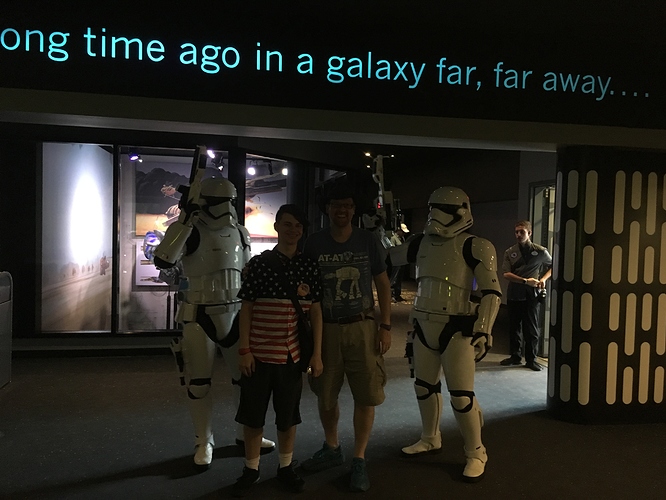 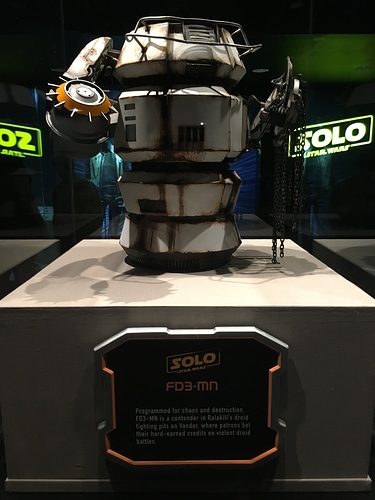 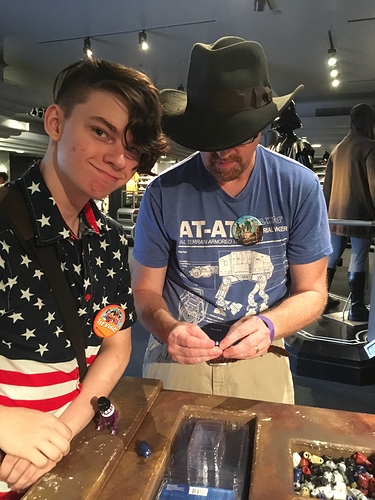 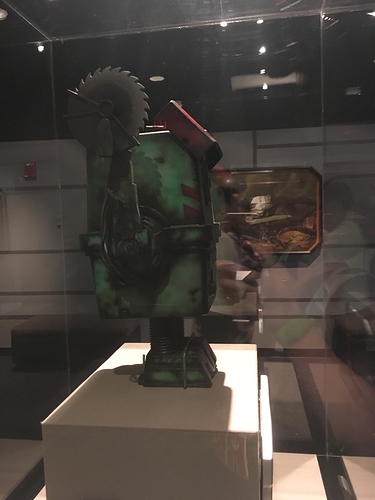 We had lots of great interactions with the stormtroopers. They were awesome! On a related note - we loved the March of the First Order. I didn’t think it’d be that interesting, but it was great. The music really made it great! 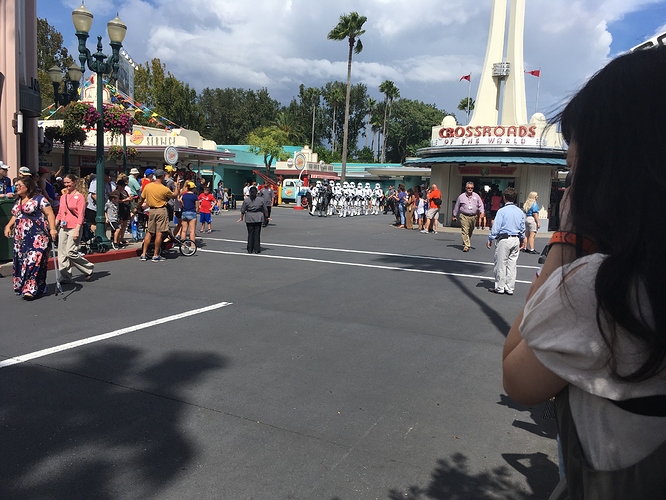 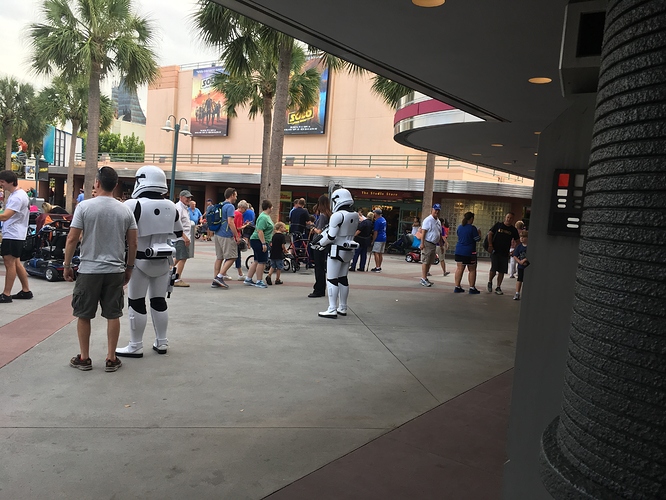 After Launch Bay, we headed to TSL for our FPP. I saw on the app that the ride was down, but I hoped it would be fixed quickly or we’d get another FPP to use elsewhere. It was so much better in TSL at night. A third of the crowd, cooler, and much more interesting to look at. The ride was still down when we got there. They were letting those with FPP go but it was a 40 minute wait. They said that we could also use that FPP for any other ride in DHS except those in TSL. We didn’t really want to ride anything else and we had that dessert party to get to, so we left. TSL just said no to us today and that’s ok. Lol 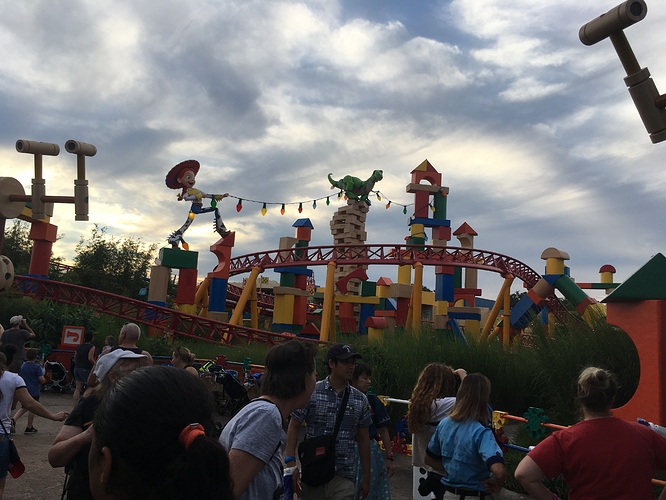 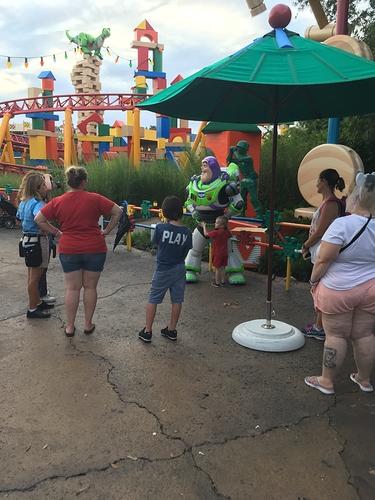 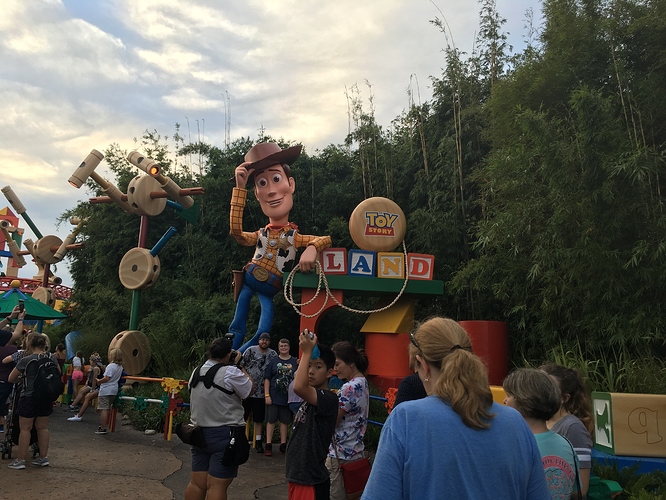 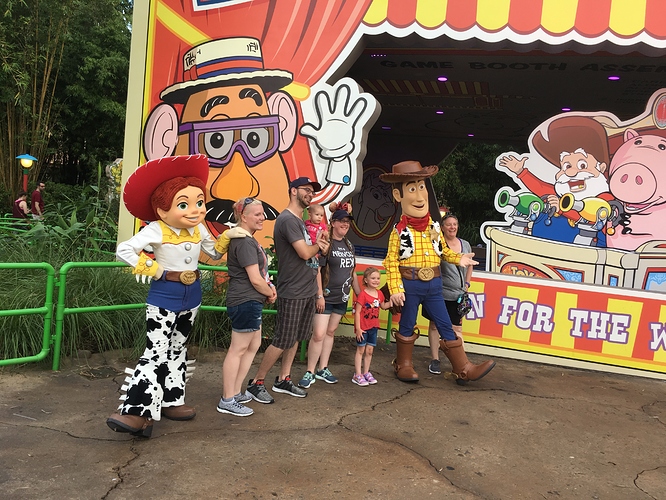 We thought the dessert party was a good value for us. We met all the characters on Launch Bay, the desserts were good (some more savory items would’ve been welcome), we got a Darth Vader souvenir stein and we loved the fireworks. There were no Jawas anywhere today, so we gave some pins to our bus driver - he was a hoot. We have a few more pins to give away tomorrow if we have a good opportunity.

We also got a pic from our house sitter of our dogs and thought Charlie seems particularly comfy. 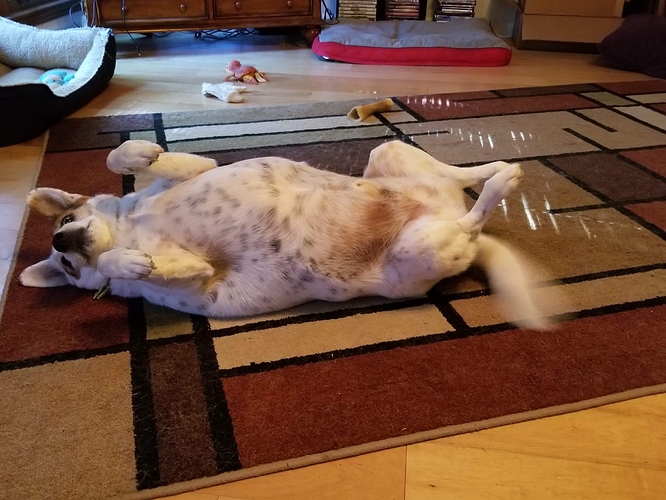 We too thought Star Tours was awesome! Love the dog pic; looks like someone wants a belly rub!

Thanks! Yep, Charlie is insatiable. Lol. They’re both rescue dogs and you couldn’t touch Charlie for two years. Now, he’ll never stop asking for a petting.

We thought the dessert party was a good value for us.

How was the seating area for the actual fireworks show? We are going next week and on the fence about whether it would be worth it. We will be coming from Food & Wine so not sure how many desserts we will actually eat. Mainly doing it because 1) Star Wars fans and 2) want good seating without having to wait forever. But keep going back and forth on whether it will be worth spending the extra $. There will only be two of us, no kids

The seating for eating desserts was nice. There is ZERO seating for the fireworks. They had us sit on pavement in front of the theatre. With DH’s back issue, we opted to stand on the staircase instead.

One more thing - because we were so close, we had to crane our necks a bit to see the fireworks and some was blocked by a tree. We got lots of interaction with the characters before the dessert party, so it’s not critical. The storm troopers really made the rounds during the party, but we saw them a lot beforehand. Also, they don’t shut down the Launch Bay for the party. Other guest can still come through and meet characters. They DID give us a schedule time to meet Kylo Ren but none of the others. I hope that helps!

I hope that helps!

Thank you - it helps tremendously!!