Fun things to wear that isn't a robe?

We are seriously considering a late August trip to Universal. Someone mentioned riding Hagrid’s 8x in one day, and that has been rattling around in my head. We have annual passes and photos passes leftover from our February trip. Hotels are cheap and can be cancelled. Drury Inn is $73 and includes breakfast and a light dinner. We are coming from Texas, so not that worried about the heat.

But, we won’t be able to wear our robes. We aren’t worried about the heat, but we aren’t insane. In February we had rock star status because of DH’s awesome Jedi Robe and DD’s even more awesome Ravenclaw robe, which was the best thing I ever made and I made my wedding dress.

Any ideas of other things we could wear that isn’t a mask? For the mask our priority is comfort. We had the disease back in February. I don’t expect rock star status, but something fun maybe. Something like Mickey Ears, but matching Universal.

When I went last year with sis nieces 14&12 and nephew 11 I made everyone matching sweatshirts.

My son got a lot of attention in his superhero shirts.

Robes are… a lot. My friends have gotten lots of comments about Harry Potter fan shirts from various online sites, one was Ron riding the chess piece from Sorcerer’s Stone.

The robes were very helpful in February. The hoods provided sun shade and the robes provided warmth. As a pale redhead I appreciated non-chemical sun protection that couldn’t fly away.

The hotel got even cheaper after I signed up for the hotel rewards program. 8 nights for 604 including tax. You can’t beat that with a stick.

This is at Drury Inn which includes a free hot breakfast and a light, hot dinner at 5:30. I called to see if the food was those sandwiches in triangular plastic. No, they have switched to cafeteria-style serving with the same food as before. Fine by me, I’d rather someone else make my waffle.

I like baseball caps and t-shirts reflecting things at Universal—HP, ET, Simpsons, JP etc. It represents, and isn’t too in your face.

Both my daughter & I are Ravenclaws! I have a robe too & totally get it. What she has done is dress as a student w/out the robe. (White top, Ravenclaw themed tie, skirt)

This is from CityWalk but thought it showed the best example 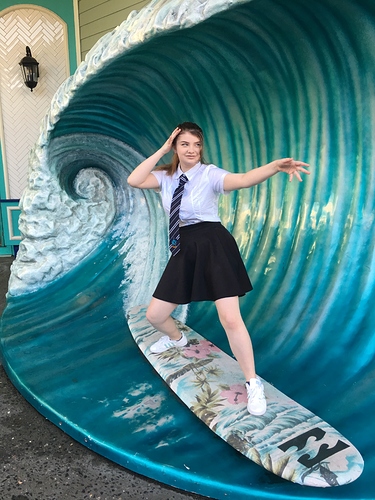 I’ve worn just my Ravenclaw t-shirt and that typically gets a lot of interaction with the wizards & witches that are stationed around WWOHP.

That is adorable! I’d be willing to buy her a tie

Well, nevermind. I just figured out that I need to get mask making. We have two for each of us, which has been plenty. But it occurred to me that we will probably be sweating and we won’t have laundry. The thought of re-wearing a mask is ick.

The thought of re-wearing a mask is ick.

Yes! You will definitely need 3 - 5 masks each day as you’ll sweat through them!

Pro Tip - bring breath mints! You’ll be breathing in the coffee, snacks & etc… that you consume all day!

Thank you for the breath mint idea! You brought back a memory.

I used to be an Engineer in the semiconductor field, where I’d have to wear what they call a Bunny Suit in the manufacturing area. A bunny suit is one of the those full body white nylon suits that just exposed the area around your eyes. One day I had dinner at this seafood place that had all-you-eat Shrimp. I had a lot of Shrimp Scampi that was loaded with garlic. Then I had to go back to work to wear the bunny seat. It was traumatizing. The garlic blew right into my nose.

Then I had to go back to work to wear the bunny seat. It was traumatizing. The garlic blew right into my nose.

Please, Philosopher’s Stone. None of this dumbed down for the Americans nonsense here.

If you go back to thinking about clothes, this is very comfortable and cool and has gotten a lot of compliments in the parks. (That sounds arrogant. I swear I’m not trying to be arrogant.) 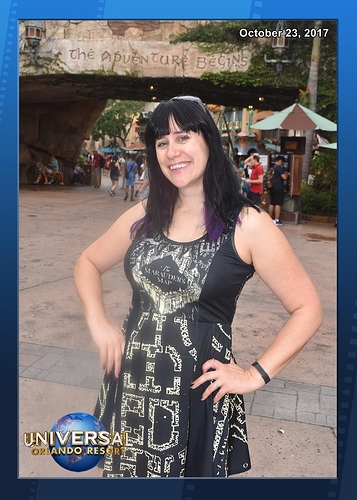 That is adorable. Where did you get that?

Thanks, guys! I actually got that dress a couple years ago from Hot Topic. It is amazingly comfortable.