I used to really enjoy the Maelstrom ride. We will be at Epcot for at least 2.5 days. I have two sons (definitely not Frozen fans), but I am sure they will cooperate for one ride. Is it a fun ride? I loved the movie and want to see the ride. TT and Soarin’ are some of our favorite rides at WDW, but do you think it is worth giving up a Tier 1 FPP on one of the days to do FEA?

The ride mechanism is identical to Maelstrom. But the overall feel of the ride is completely different. It is more like the Little Mermaid ride. But the entire ride is worth the scene where the boat goes backward. The effects are just really cool (literally and figuratively).

I would in no way put it as a favorite ride or anything, but if you like Frozen and enjoyed Maelstrom, you should like it.

I have two older sons who loved Maelstrom and we are going to EPCOT for about the same amount of time as you are. We will probably RD Soarin’ to free up a FP for FEA. They’ve increased capacity at Soarin’ since we were there, and it seems that it and FEA have lower wait times late in the day so you could try them then, as well. I wouldn’t give up a TT FP for FEA, though.

If it doesn’t work out I plan to blame @ryan1.

If it doesn’t work out I plan to blame @ryan1.

I’m a 40-something aged kid and I thought FEA was fun. I wiuld recommend trying it one of your Epcot days.

FEA is definitely not worth a Tier one FP. This ride is nothing special unless you are Norweigen and want to do a heritage thing. Now if Frozen is your thing, go over to HS and attend Frozen sing along. It really is not a sing along at all but a comedy show with Frozen as the theme. It is hilarious! Believe me your children will love it way more that FEA and so will you.

Yes, it’s a fun enough ride and you want to do it so do it! The part where the boat goes backwards is enjoyable enough thrill for most kids. You an usually pick up a same day Soarin as a 4th FastPass anyways. Most older kids (boy or girl) are “over Frozen” as they’re been bombarded with it most of their lives that they can remember but the ride is still cute to try once.

I am currently debating this as well. Last time I did FPP for FEA because of geography. I liked doing RD FW and then using a FPP around lunch for FEA. Kept me from having to walk all the way too WS an then all the way back to continue on my way.

We are at the Dolphin this time, so will come in through IG. So I may do FEA first this time and then head to FW.

My non-logical problem with that is that FEA is not very EPCOT-y. So I haven’t decided how I feel about starting the day with it

Other than World Showcase, Epcot isn’t Epcot-y anymore. That ship sailed with Horizons, World of Motion, and Wonders of Life.

I love Frozen but thought the ride was dull and frankly a bit crappy. I miss Maelstrom.

I like the ride but it helps to be a fan of the movie. It is heavily themed.

The boys would likely prefer Soarin’ & Test Track, if you plan to use each day for a tier one pass.

I personally love Frozen Ever After and I’m not even a fan of the movie. I guess it’s all in what you’re looking for.

That summarizes it nicely!

I think what tips it in favor of doing the ride is that we just haven’t seen it before. It might be a one and done, but it will get points from the kids just for being new. I think I will get Frozen for the family to watch at some point to bring them up to speed. I hear that movie does have catchy tunes.

I think what tips it in favor of doing the ride is that we just haven’t seen it before. It might be a one and done, but it will get points from the kids just for being new. I think I will get Frozen for the family to watch at some point to bring them up to speed. I hear that movie does have catchy tunes.

Eh, you may just want to Let It Go…

One of my Disney obsessions is that I can say that I’ve been on every ride that has ever been in WDW - at least up to Nov 2014, the date of my last trip. So for me FEA is a “Must do”. I plan on RDing Soarin’, using an FPP for HEA and doing TT only if the single rider line is reasonable (I’ve never “loved” it - I like V2 even less than the original “crash test dummy” version - and I’ve been on it enough times that if I miss it, no harm, no foul).

Funny thing about that. Last trip was our first time to try the V2 version. (I like to call it the Tron version.)

We broke into 3 groups of 2 for designing our vehicles, and my son and I decided to make the most outlandish vehicle we could imagine. We had no idea what we were doing this for, only figured it was a “time waster” in line. None of the Cast Members explained anything. It is also important to note that we were using the tickets, not magic bands, and after we scanned our tickets I would take all of them back and stick them in my wallet for safe keeping.

Anyhow, after designing our car, we were rushed to the line where you board your vehicle. The CMs were insisting we had to scan our tickets/magic bands…but we had to hurry because we were next to go. They still didn’t say way. But this meant getting out 6 tickets, and figuring out which belonged to whom…and we had only randomly scanned our tickets to begin with when designing our car! Exasperated by the fact that we didn’t scan our tickets in time, they ushered us into the vehicles without scanning anything.

It wasn’t until we were on the ride that it all become clear, because the ratings for each test were supposed to show on the screen for each of our vehicles. Only, we didn’t have any vehicle scanned, so nothing came up, except for the folks sitting in the same vehicle behind us that were strangers.

So, now I’m looking forward to returning and trying it again, THIS TIME knowing up front about the ticket thing. I do blame Disney, though, that they did not make it clear what needed to happen. They just ASSUMED everyone was using Magic Bands or something.

ETA: Oh, look. I still have the pictures of our three vehicles. Mine is the crazy one (not the cool ones) 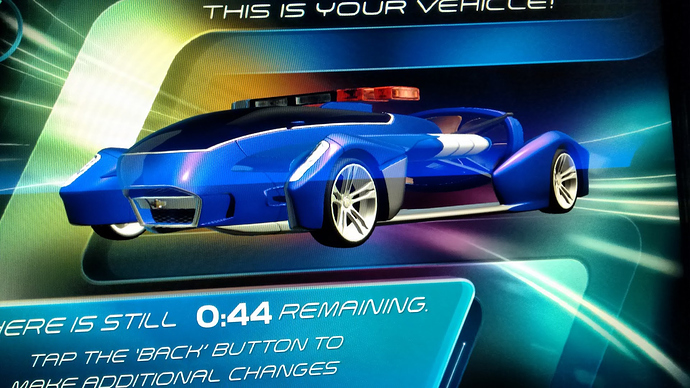 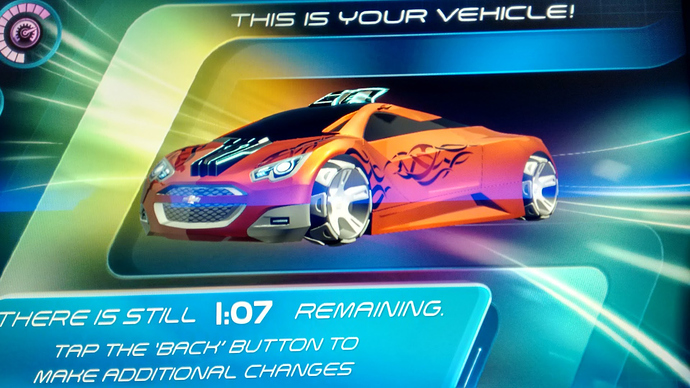 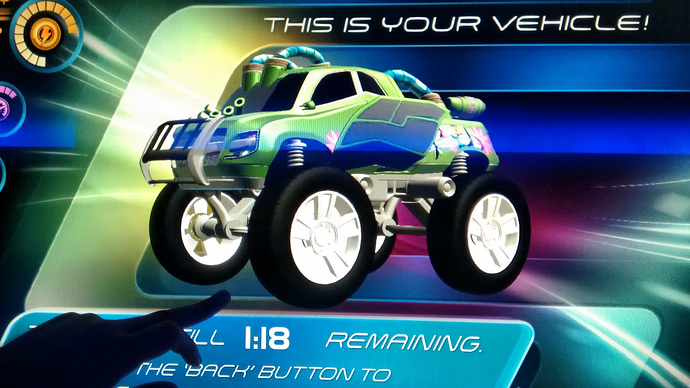