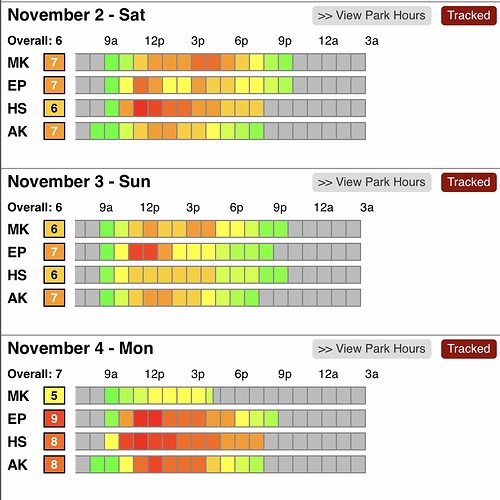 I am struggling to choose my park days for EP, AK, HS for my honeymoon in November. What’s particularly throwing me out is EP (during F&W) is showing a 9 on a Monday (Nov 4th) but 7’s on Saturday 2nd and Sunday 3rd. This seems to go against everything I’m reading “avoid F&W on the weekends” Thoughts on the realistic difference between a 7 & a 9 during this period?

I want to do Boma breakfast on EP day (we are staying at AKL so this still makes sense) and Tusker House for AK day. (No ADR’s needed on HS day).
I’m thinking of making ADR’s for these restaurants on all three days at 180 days and then letting FOP & SDD FP availability (along with the assumption that we will know more about SW:GE’s situation) determine what we do?

Does anyone have any better advice?

What is your priority at EP? The crowd calendar will not really report which day the food booths will be busiest ( yes- the weekend).

Top priorities for EP “day” is rides. With a quick dabble to food and wine for late afternoon lunch / early dinner. (Assuming Breakfast @ Boma will keep us pretty full for a while)

We have 6 day park hoppers and are a honeymoon couple. So will have 2 days MK, 1 day Epcot, AK, and HS + an extra day of rope-dropping SW:GE if we need to (if ROTR is open and we didn’t get through anything) before bouncing back to Epcot for a more focused F&W / World Showcase afternoon.

TP crowd calendars only factor in ride wait times for their crowd calendars. So F&W will not really show up in the crowd levels. I’ve done Mondays at Epcot without a problem. However, I have not gone in November, so I’m not sure if that would make a difference.

I’m thinking of making ADR’s for these restaurants on all three days at 180 days and then letting FOP & SDD FP availability (along with the assumption that we will know more about SW:GE’s situation) determine what we do?

Does anyone have any better advice?

This is the best advice, in my opinion. I always book multiple days/times for my must do restaurants, and then let FPP and other events guide me much closer to 60 days out.

MK closes at 4:30 that day. I wonder if that is causing the spike…

also that Monday is day after race weekend. …wonder if folks add on days after that weekend. but i bet its the early close of MK

I was there that weekend! I took
Advantage of MKs early closing and “light” crowds… Tuesday is Election Day. On top of the race weekend Monday did feel more crowded to me. I wasn’t in Epcot but I’m not surprised because of what we saw at MK.

We made the mistake of going to Epcot on that Monday last year, the day where MK closed at 4:30. It was so crowded. I think the early MK closure played into it. Last year HS and AK closed by 8 pm, so I think Epcot was a much more attractive option for people who were avoiding MK. Though maybe that will be different this year, if HS has extended hours and draws some of those crowds.

I can’t really say how the F&W booths compared to weekend crowds because that was our only day there, but by mid-day it was hard to move through WS and the lines in Future World were much longer than predicted. (Last year TP had predicted a 5, not the 9 it turned out to be.) Rides that people say you never need a FP for had hour plus lines. We didn’t have hoppers, otherwise we probably would have switched parks. This year we decided to try EPCOT on that Sunday, which is predicted to have lower wait times. I’m a little worried about the crowds and waits then, too, since there will be locals there for F&W plus the race crowds who can enter in the evening with their party tickets, but since our trip this year is so short we have to do Epcot either Sun or Mon.

Even though our Epcot day isn’t flexible (since I’m too scared of that Monday, LOL!) I’m going to do the same as you are with ADRs in multiple parks for our other days. I’m figuring that by the time we need to make FPs we’ll know more about GE, how opening and closing hours at all the parks will be affected, and what FP availability is like.

Thanks Rachel, I might cross my fingers and toes that Epcot on the Saturday works out best. Since we’ll want rides mainly, the locals on the Saturday hitting up the food booths might be OK… I’m figuring that the fact that it’s towards the end of F&W will reduce the local crowds by 0.2%

I’ve also noticed that the staff party on the Monday isn’t ALWAYS that Monday - we may get lucky and it may be another week… we also have hoppers to abandon plans if it ever gets too much- an investment that may prove worthwhile.