Southwest opened flights for our return trip today. Of course their flight itinerary is now different than I predicted. We originally planned a park day that day, with boarding DME around 4:30 for our 7:30 flight.

Now they have a 2:30pm flight and a 8:45pm flight. Do we sacrifice our last park day in favor of an earlier fight & getting home at a more reasonable time? We could just do Ohana that morning, although that is a lot of back & forth honestly. Or keep the late flight & maximize Disney time???

My husband would want the early flight and I would push for the later one. But I’m the die hard and he goes along because it makes me happy. YMMV

How far is airport from your house? And can you relax the following day? If it were me and the airport was within an hour from home and I could relax and recover the next day, then I would book the late flight!!! This issue happened to us last spring break. We could leave on 1145 flight or 745 pm flight but our closest SW airport is 3 hours away. So, we ended up staying an extra night and taking the stupid-early flight the next am–will not do that again! Bell services picked up our luggage at 330 am, although they did give us a golf cart ride to the main lobby for DME (but at 330 am!!!).

Airport is 1hr20min from our house. The kids and I can relax the next day, but DH and my in-laws have to work. They should be able to get to bed by midnight- that’s reasonable, right?

Yeah there is also a 6am flight but I absolutely refuse to take it. No way are we leaving at 3am!

Your time change is only an hour and 15 minutes… that’s nothing. I would definitely go for the later flight.

Well, yes and no. They also added a midday flight that previously wasn’t an option. Before my choice was obnoxiously early in AM or evening. Now I have a reasonable midday choice.

I meant from your original planning(which I assume was your ideal), you are pushing back only an hour. Or did I misread that?

Our flight home is 8:30 pm, we will land around 11 pm and 90 minutes home. Hubby works the next day, but can work from home, so it’s doable.

We had an earlier flight our last trip and got delayed with thunderstorms and wound up with pretty much the same flight as we booked this time and we survived, so we figured why not.

Magical express picks you up 4 hours in advance now, not 3.

I thought that was just a temporary thing due to the holidays last fall? 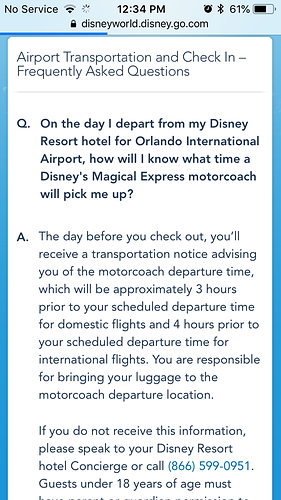 Correct, back to 3 hours for domestic flights.

Yeah, but won’t your return flight be in that same time frame this year?

Not to complicate things, but your in-laws could always fly back mid-day if they have to get back to work the next day and the rest of you could tour til you drop the last day and catch the last flight. Arriving home and in bed by midnight is the best case scenario with the late flight, right? Potential for weather and/or airport delays are there. Not that this would change my opinion but just something to consider for the in-laws.

Not exactly. Our return flight will be 11/6. I don’t think they started the longer DME until late November last year. I will definitely double check though!

Good thought! I will check with them & see. They have only flown one other time, so idk if they would feel comfortable going by themselves.