Fiber Optics in pavement at Epcot

I was in Epcot in the late 90’s as a teen and have lasting memories of seeing fiber optics in the pavement at Epcot. At night the patterns would swirl and change colors and were truly something to behold.

I have done a few searches on-line and see that what I remember still exists near Innoventions West. Can anyone show me on a map, or give me more detail on where EXACTLY they are? “near innoventions west” is a broad area and I really want to be sure my 5 year old son gets to see them on this trip in April.

Thanks so much for all you help!

I remember seeing them when I was there in December 2015. I feel like they were in the pavement on the sides of Spaceship Earth.

They were definitely on the Spaceship earth side. Closer to the building. Once there - you will certainly find them. It wasn’t a small area

there are simple ones that just have white colored flecks in the pavement that look like pixie dust has been sprinkled about. they don’t change color, and they don’t form a pattern.

However, there other examples of fiber optics that have clearly defined patterns. A light source that changes color and rotates which gives them “swirling” effect. I am look for these.

I know what you mean. The swirling ones were in a small area surrounded by bushes and benches. Very close to the exit of Innoventions, the one on the right as you’re entering the Epcot park. I don’t remember if it’s East or West.
As of fall 2014 they were still there, my boys were playing on them. I remember them from when I was a kid too, in the 80s when I was 10! 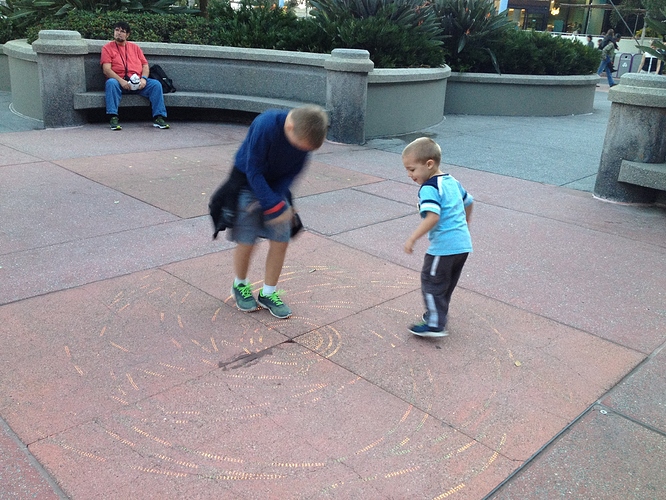 thanks for the picture! I think I was able to pinpoint the location on Google Earth by the seatwalls in the background of your photo. There is a clearly defined area of curved/concave seat walls that surround a small plaza space. it must be right there!