Some of the weekends in early summer are showing the same crowd levels as non-Spring Break weekends in spring; the supposed “light crowd” weekends in March-April.

What’s up with that? Is Father’s Day really a light day for DLR?

The crowd calendar has been off since last May when the 60th started. The only real slow days have been when it is raining, DL has been very busy month after month. Veterans Day in 2015 showed a 2 all year even though that was unrealistic. It was a 10, as I knew it would be. All weekends tend to be busy as so many locals have passes. As long as you have a good plan and hit early entry if you have it you will be fine if you choose that time to go.

We were there Father’s day last year & while Friday & Saturday were both busy (Sat our anniversary was a grad nite), Father’s Day was only a 5/4 for DL/DCA (predicted 6/7). Sunday is usually a pretty laid back day at DLR and Sunday morning DL RDs have been some of my favorite times to tour the parks. I imagine Father’s day is only more laid back than that with a lot of locals staying home to spend the day with family.

@lolabear_la Do you still stand by Father’s Day being a 5/10 day? We went in November on a 5/10 day and we did ALMOST everything we wanted to without early morning entry and with the park closing early at 8 or 9. and @Wahoohokie they did change VD to a 9 or 10, but that was just 2 days before.

We are trying to go one more time during the month of June. The only week we have available is w/o 6/13 otherwise we have to go on a Sunday both Father’s Day and June 5th still show 5/10 crowds.

Looking back at what TP has gathered here are the crowd levels from Father’s Day back to 2006. 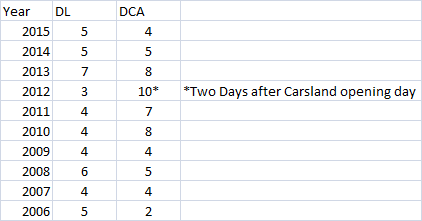 Looking at these numbers, I’d say Father’s Day is a great day to go, especially if you follow @Wahoohokie’s awesome advice to go early.

Of course, with any day you choose, especially on the weekends, it’s possible that the crowd level that shows up is higher than expected, but also as Wahoohokie has pointed out, crowds have been on the rise and higher than expected since the debut of the 60th. I find it’s almost always better to plan/expect it to be worse, while holding out hope for it to be the predicted! In my personal opinion I would be surprised if you ended up worse off than 7/8, and that’s still better than a 10!

Thanks, that is what I was thinking. You ladies are super awesome!