Hopefully the vaccine will help.

Well. I won’t let them NOT go. So they are going. Whether I get to finish the question.

That’s very sweet of you. Gregg is thinking about letting me and my girls go next time instead of coming with us. He hates the idea, but he’s felt bad the last two times we’ve gone.

Monday was our last day in WDW. What I wanted to do was pack up and leave everything at Pop at the front, and then come back after HS to pick up our stuff and THEN pack up the car before heading down the road to our hotel. Gregg decided it would be a better choice to pack up the car before going to HS. It was hot and I was exhausted before we even got to HS. Gregg packed the car up instead of me. We were there before the BG drop, but I didn’t get one for Aneira.

So, Gregg and Aneira were really looking forward to going to see Galaxy’s Edge. It didn’t disappoint them. I am not a SW fanatic like most of my family are, but I do have to say that I enjoyed the theming, although I had a hard time reading the signs on buildings.

We first went to pick up the detonator bottles because they are pretty cool. 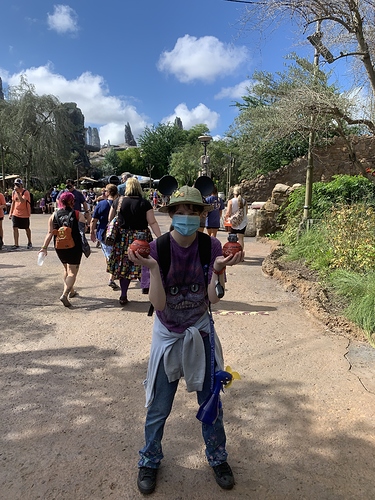 Gregg and Aneira took turns taking pictures in front of this. I was super hot and absolutely exhausted from the walk, so I stayed in the shade. 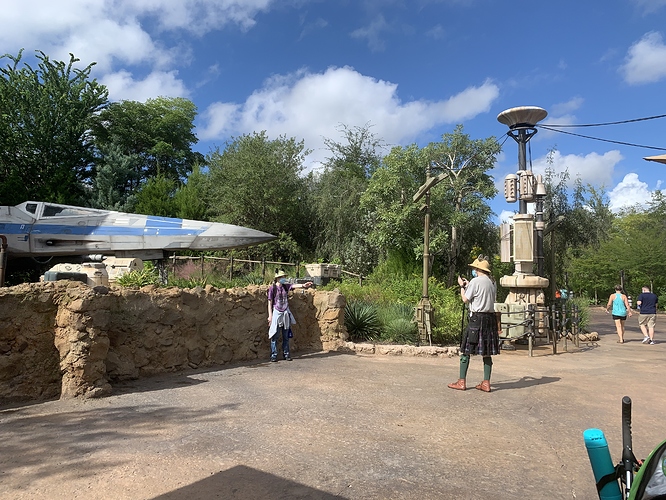 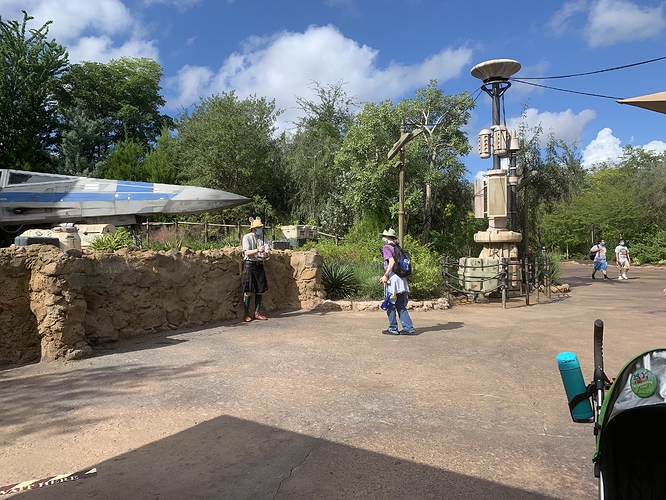 After the fiasco of Aneira not feeling well without eating in the morning the day before, I made the decision that we would go eat first at DB7. It was a good choice. I loved the beef and slaw, but that blueberry muffin thing was dry and, well, awful. 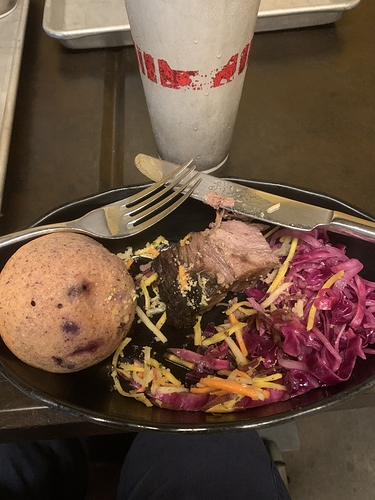 Gregg and Aneira both got the chicken. 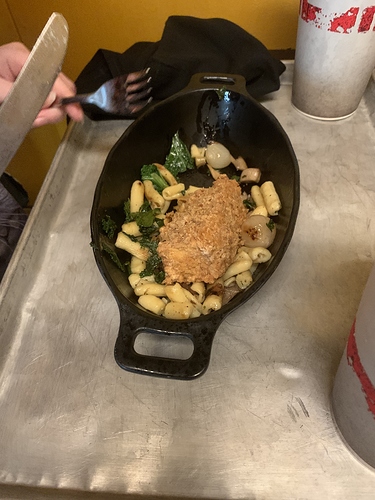 We all three shared a blue milk. Gregg and Aneira didn’t enjoy it so much. I did! I even went back for an alcohol version of it. 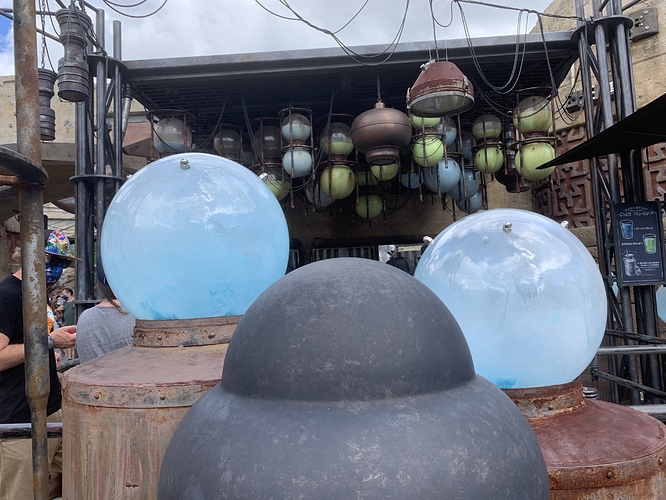 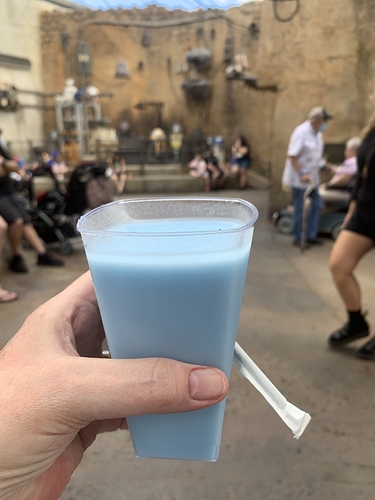 They let Gregg go into the MFSR to see everything, and even sit in the front, but of course, he couldn’t ride it. I wasn’t that interested. Aneira rode it alone, and she crashed and burned. After leaving them to their fun in GE, I stopped by to get my adult version of the blue milk, yum, and then headed over to ride MMRR. I enjoyed it, but had to close my eyes for parts of it, due to my vertigo. It was fun, and I think Aneira would really have loved it, but she said it wasn’t her thing. Whatever. Gregg met me over at the Frozen show, and we watched from the back this time. It was still enjoyable, and loved the extra COVID jokes. Aneira went off to ride all of her favorite rides. We stayed until almost close, and then headed over to DS one last time, to get Cookes of Dublin fish, and poutine from The Daily Poutine. I didn’t take pictures of the food. I was just too tired to think of it. 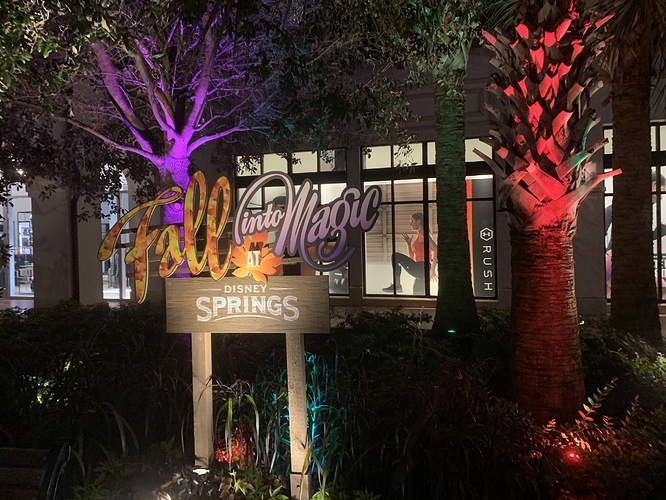 So then I drove us to the hotel near the airport and crawled into bed. Talk about exhausted. Next morning we had a hard time getting ourselves together to leave before check-out, and overslept for breakfast. Then, I had to go repack the car, in the heat and direct sun, since Gregg needed to lie back in the passenger seat, and because he didn’t do a great job packing the day before. I was trying to repack, and some guy came to “help” me. After he left, I had to redo it, again. I told Gregg that it was nice that I didn’t have to think about packing up the day before, or having to go back to the resort afterwards, but I also told him that I would have preferred to pack ONCE in the cool of the night on Monday than to do everything in direct sun, and that I would eventually wouldn’t be mad. I know he was only trying to help. I just get very cross when hot and in pain. I did appreciate his help, but it did cause extra work for me.

Sorry you didn’t get a BG.
Docking Bay 7 is yummy.
Riding alone on MFSR would be a challenge. It’s hard enough with two people.

Overall, it was a good trip. I felt bad for Gregg who had that sick headache the entire time. He started feeling better about three or four days after returning home. We got to see some fun things, and not having any major plans worked well. Aneira and I ate well, but there was very little that Gregg could eat in QS. He ended up getting a fish fillet sandwich without the bread at McDonald’s for most of his stay. We liked not having to be any place at a particular time. That was very freeing. We felt that the trip was much more leisurely than most we’ve had before.

The heat was way too much for me. I don’t do heat well due to some of my meds, and I’m also a very hot-natured person. I think my favorite time to visit is in December. I want to try for a January trip in 2022. However, I would like to wait until the dining plan comes back before going again. I will definitely get an ECV next time. If we can’t afford the ECV, we shouldn’t afford to go.

Being at Disney was really awesome, and it was a needed distraction from all that is going on.

I really enjoyed your report! The heat would kill me too, I would just have headaches . I love the no plan mentality for your trip—. Sounded so cool to just do what everyone felt like.