Lately there have been many questions about pre-park opening (PPO) breakfast at DLR on chat. While there are no PPO breakfasts at DLR, you can get a Plaza ADR during Early Entry hours. This can be useful on Extra Magic Hour days when you are not staying on site and otherwise would not have access to the park.

I live in Virginia but travel to Los Angeles every August for work related travel. It finally occurred to me in 2017 that I could add a DLR visit onto the end of my work trip. After several years on touring plans, a solo trip was suddenly something I would consider and I had reached the point as a parent where I no longer felt guilty taking some time for myself, even after being away from my family for work.

However in 2017, I wasn’t totally over these things. That first trip ended up being 9 hours at Disneyland. I arrived at the park at 1:30pm and had a fantastic but exhausting time running from ride to ride, with a couple of key food items and shows thrown in.

When the time came for my 2018 trip, I wanted to do things differently. I would say “no” if people asked me to do extra events for work that would interfere with going to Disneyland. I would have 2 full days, one for each park. I would use some of my time in the parks to admire the fantastic details of the original park. I do, however, always do these trips on the cheap, which means no onsite stay.

At @Markowskim’s suggestion, I booked a 7:50am Plaza breakfast on a day that DL had a 7:00am EMH. For reference this was a Thursday that ended up with a CL of 6.

While I had every intention of being at the gates no later than 30 minutes early, my morning did not turn out that way. I left the Lowes in Hollywood at 5:30, a good 15 minutes later than recommended by everyone here. While I hit a little traffic leaving LA, things were not too bad and I was able to get to the Grand Legacy by 6:30. As luck would (or wouldn’t have it), my room was already ready. While my brain was saying, “leave your stuff in the car, hit the park!” I couldn’t help myself and ended up taking my bags up to my room, and doing a little organizing.

In the end I was looking at this at 6:50 - way behind schedule, but super excited: 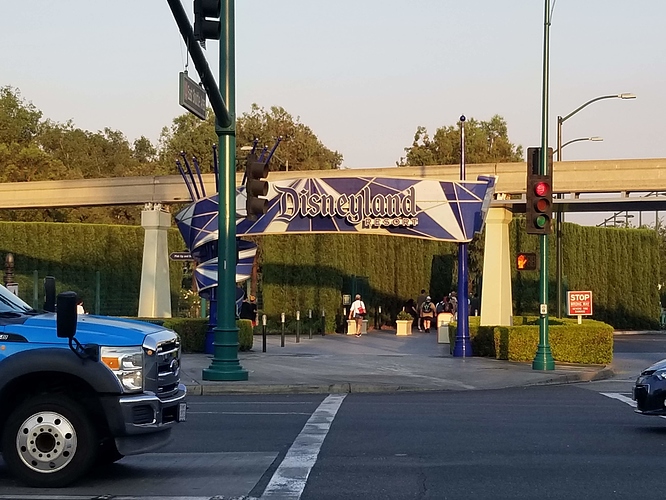 I was able to move through security quickly by going through one of the checkpoints on the far left. There were lines at all of the checkpoints nearest to the DL park entrance, but no wait at the ones near DCA (which wasn’t opening for another 70 minutes).

At 6:55 this is what the lines into the park looked like: 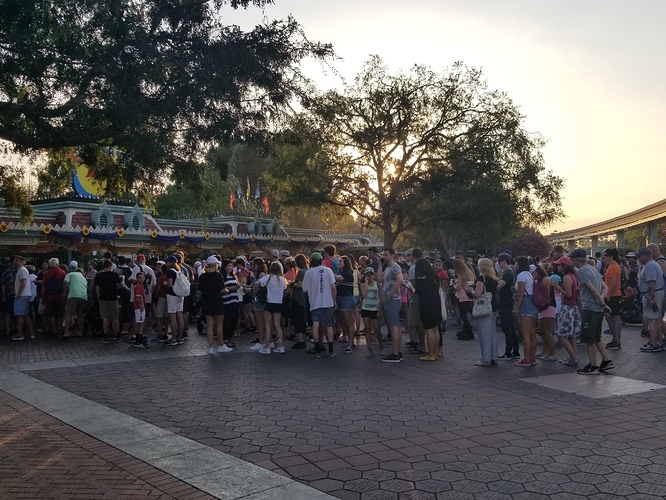 I hoped there was a separate ADR entrance. And there was, on the far left of the entrance. I was no more than 20 people back. 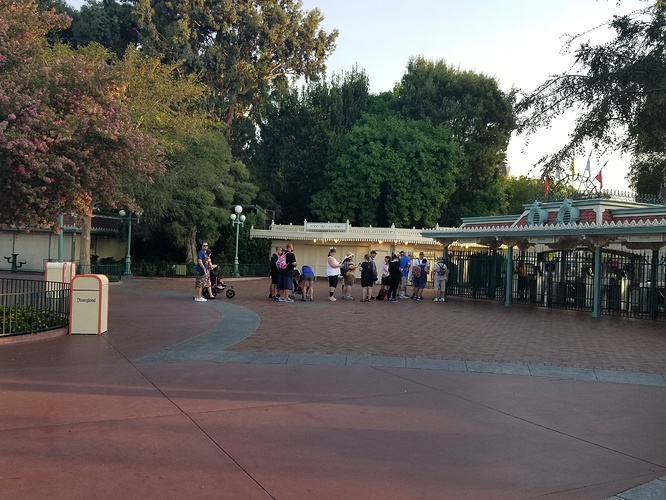 (I hear sometimes there is not a separate entrance, so I don’t recommend waltzing up 5 minutes before park opening like I did, in case there is not).

The Plaza ADR line opened exactly at park opening. I had to show my dining reservation, but the CM did not blink at my 7:50 time.

While waiting to get in, I saw the wave of Peter Pan runners go. I waked with purpose, but also with a “take it all in” mindset to Peter Pan. (I also grabbed my first MP of the day - an 8:00 SM). When I got to PP the line was starting to fill the last switch back. From my notes, I apparently boarded at 7:22. Not bad considering I got in line 5 minutes before park opening.

After riding Peter Pan, I hopped on Snow White’s Scary Adventures and then rode Alice, one of my very favorite rides - I love all of the details around the ride. Then, I headed over to the Plaza for breakfast.

At 7:48 this was the scene at the hub. The crowd for the regular opening had been let in, and were being held halfway around the Hub. The sidewalks were kept clear, so it was easy to get to the Plaza. 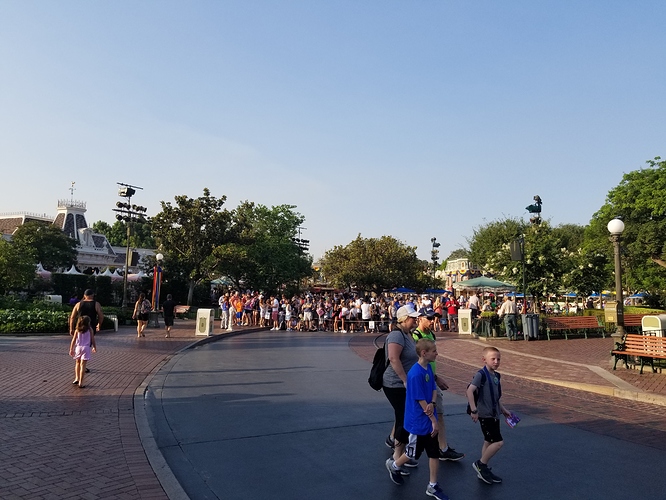 Once I arrived at the Plaza, there was a short line at the cart by the entrance. This is where they check you in and then send you to the line for the photopass photo with Minnie. If you wanted to go straight to breakfast, I am sure you could skip the photo op and go straight in. I chose to stand in the 5 min. wait; as a solo traveler I wasn’t sure how easy it would be to get photos inside.

Once inside I paid for my breakfast and was shown to my seat. It was shaping up to be a hot day so I wasn’t thrilled to be seated outside. In the end, it made interactions with the characters a little more personal - and the low volume of people made me feel a little more comfortable as a solo traveler. At the table next to me were two women in their 60’s and at the table behind me there were 2 woman in their 20’s. The rest of the porch tables were families, so I appreciated having some other “adults only” tables. And the twenty-somethings offered to take a few pictures for me, they were super lovely and having a great time too.

As a WDW veteran, I was amazed by the sheer volume and variety of characters walking around. Maybe it is because at WDW people are taking their “once in a lifetime” trip and want to be guaranteed which characters they will meet. So surprises are bad. Maybe the actuaries haven’t gotten a hold of Park Operations at DLR yet. Or maybe because there are so many locals, surprises are good! I spoke to a local mom who was thrilled by having characters they had never met before.

I was not looking for high quality food with this ADR, but the food ended up being pretty good. It was VERY standard Disney buffet breakfast food, but it was tasty and hot and freshly prepared (it was still early in the day). By this point I had been up for more than 3 hours with nothing to eat and only some water and a hotel cup of coffee to drink. So it all tasted great.

To be honest, I booked this ADR to maximize my park time, but I loved it for the meet and greets. My DD8 has never been into meet and greets. At 5, she was afraid of any of the characters without faces. And then the ones with faces overwhelmed her (she burst into tears after meeting Anna and Elsa, I figured it was the equivalent of me meeting Bono. I get it). Now that she is 8, she thinks she is too old for any of it. There were several families out on the porch that morning, 4 out of 5 of them were taking adorable pictures and having precious moments with the characters. One table had a wailing girl who wanted nothing to do with any of it. I understood those parents. I am that parent.

When you are at a character breakfast with your child, the event is (understandably) about your child. When they are in tears, you are (understandably) trying to comfort them. When you are at a character breakfast by yourself, it is about you. I wasn’t sure if I would be “in” to it. But interacting with the characters by myself and not for DD’s reaction (especially because she is just not that into it) was so much fun.

The only down side: taking selfies with big plushy characters is difficult:

I highly recommend staying seated and having them behind you:

The penguin was the character who really helped me get into the meet and greets. He actually sat down at the table with me, clicking at me, cleaning my table and straightening it up. Then he hopped up, gave me several kisses on the head and posed for the picture. It was really precious.

I did not wait to meet every single character, and there were a couple that were focused on the tables with kids, so I didn’t make a huge effort to meet them.

By 8:30, I had eaten breakfast and met with 5 characters plus Minnie. It was time to use my first MP of the day and go ride Space Mountain. By 9:05 I was off of Space and in Frontierland grabbing a FP for the second Fantasmic show (which is the show I wanted).

I would definitely recommend the EMH Plaza ADR. Ultimately by one hour after my “official” park opening time, I had ridden 4 rides including the always-busy Peter Pan, had a lovely breakfast and was headed into Frontierland. All with minimal standing in line. Because I only had one day at DL, it was important for me to maximize my time. But even if I had multiple days, I think I would still do it this way, especially if I wanted to do a character breakfast.

I recommend choosing a late ADR, like I did, if the rides in Fantasyland are your priority. Being able to RD those rides is crucial. If Fantasyland is not your priority, then an 8:00 ADR followed by a ride or two in Tomorrowland would also work. With an early time you could could also be the first into the other parts of the park by positioning yourself ahead of everyone in the Hub.

I hope this is helpful. Happy planning, especially you solo travelers!

Thanks for the wonderful “how-to” details - and cute photos! I’ll be staying off-site this summer, so I’m definitely going to try to do this.

Superb report! Thank you! It was fun to read. I appreciated all your tips and a solo trip is on my bucket list!

I definitely think it is worth it. And honestly, the earlier the park opens, the more worth it because there are just fewer people around!

Aw, thanks! The solo trip has been really good for me. I highly recommend it to everyone!