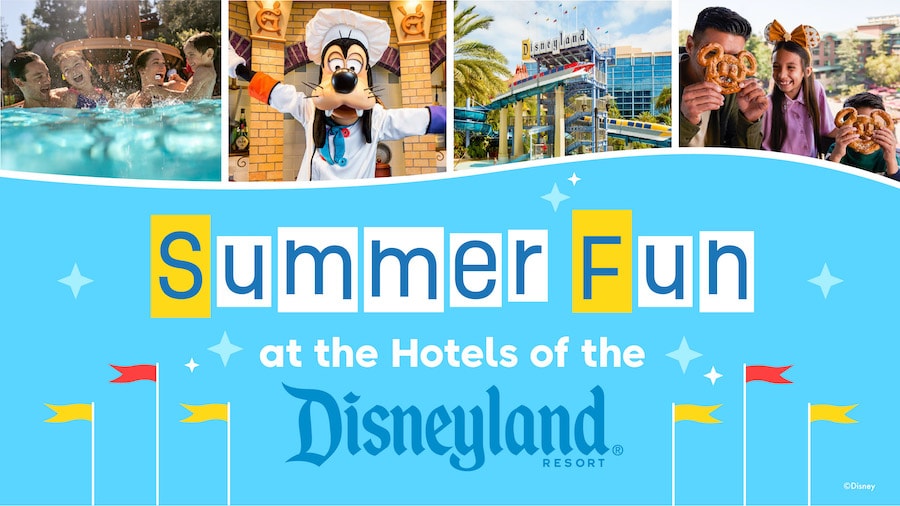 Splash Into Summer with More Benefits at Disneyland Resort Hotels

It’s time for your summer vacay, and the Hotels of the Disneyland Resort have lots of fun for every member of the family! While nighttime spectaculars are lighting up this summer with excitement in Disneyland park and Disney California Adventure

I saw this last night and my initial thought was… “30 minutes???”

I have the $$$ to stay at GCH and have been planning on it since COVID. However, the benefits aren’t there. More & more it’s looking like I’d rather just stay at a nice chain hotel less than a mile away and/or the convention center to save the $$$ and get, basically, no loss in benefits…

Coming Soon! Preferred Dine Access will offer you, as a Disneyland Resort Hotel guest, the opportunity to have preferred access to a limited number of reservations at select hotel table service restaurants during the dates of your hotel stay. Stay tuned for more details! ****

I’m excited about this.

Ressies have been increasingly hard to come by my last two times trying.

I’m interested in learning how this will work out. Like, an earlier booking window? We’re just starting to research the restaurants in prep for our Oct trip and I’m getting super excited!

I’d certainly use any reservation finder you can find just in case.

Are all amazing fountains of knowledge for everything Disneyland related.

I’m flattered to be on this list, but I’m not a DL pro like the others on the list. I’d love to up my game there though

You’re a pro in my mind, even if it’s been a couple of years since your last visit.

Don’t count yourself out.

I’m so excited for you! I hope you love it the way we all do.

Add Sam’s Tiki something or another to your lounge list!

Well in the past as I used this for my Oct 2019 trip they set aside some seats at popular restaurants for hotel guests. So for example, on that trip I wanted a Plaza Inn reservation and there were none but I called the hotel I believe and I was able to get one because we were hotel guests.

BTW, I’ve been on here sporadically at best the last few weeks, so I had no clue you were sick at the end of your trip.

No worries. back to the normal congestion aka allergies now! LOL

If it’s the same as the past they kept a selection of reservations just for hotel guests. Up until the day before. At that point any left unbooked were released to the general public. Also previously you had to call into the dining line to be able to get that pool, but now that they have the capability to link a hotel reservation in the app (was not a thing pre-pandemic at all) I expect they want to use that instead. But stay tuned, for sure!

And funnily enough, I thought that you could still contact the hotel and have access to those dining reservations. It was news to me that this was a perk that needed to “come back.” But that shows how much I know about on-site stays…

It does suck that it is half the time BUT not only are you able to be flexible on which park you start which day, but now it’s exclusively only hotel on-site guests in both parks. Previously DCA early entry was only available to just hotel guests and it was blissfully empty bc of the so much smaller onsite footprint and made the benefit worthwhile. DL on the other hand was available to a much wider audience through a program called Magic Morning (if you purchased tickets in advance from an authorized Disney ticket seller & they were for 3 days or more it included the same early entry access to DL as onsite hotel guests get). Because most guests who were going for 3 days did pre-buy their tickets and more & more people grew to knew about Magic Morning, it really created much less of a perk in DL.

Having both parks open, exclusive to the on-site hotel guests will IMO create a blissful advantage above the crowds. Again it does suck that they aren’t giving the full hour before, but if the trade-off is the flexibility of whichever park & truly limited to on-site guests only dispersed between the two, it’s not a bad trade-off.

On the flip side, off-site you will have zero rope-drop benefit for all e-tickets/newer lands in DCA and for most of Fantasyland & Tomorrowland in DL. I wasn’t able to find any details on what attractions are expected to be available yesterday to confirm, but this is what historically has been available for early entry in each park.

ETA: I’ll report back on if my assumptions actually pan out because now that early entry is back we booked our first DLR on-site stay since 2017 and first ever time at the GCH. We’ve done PPH once, DLH once & have talked about splurging on the GCH one day and that day has come. And we fully intend to milk those extra 30 minutes for as much as we can.

if the trade-off is the flexibility of whichever park & truly limited to on-site guests only dispersed between the two, it’s not a bad trade-off.

100% agree. I’m actually quite satisfied with this, considering I have DLH reserved for September and wasn’t even expecting EE to return by then. I like how it worked at WDW - you basically got one ride done and in queue for a second before the parks open. At Disneyland, crowds are already super low in the morning, so you don’t really need an hour of exclusive access. Just half an hour headstart to get positioned (and time in the parks when it’s cool!).

So nothing in the parks?

Having both parks open, exclusive to the on-site hotel guests will IMO create a blissful advantage above the crowds. Again it does suck that they aren’t giving the full hour before, but if the trade-off is the flexibility of whichever park & truly limited to on-site guests only dispersed between the two, it’s not a bad trade-off.

Thanks for clarifying! I was familiar with Morning Magic but didn’t understand that Early Entry was exclusively for on-site guests. Morning Magic is what drew me to DLR in 2018 when I started planning that trip. (Back then I couldn’t decide on a Harbor Blvd hotel so I just picked GCH!!)

30 minutes is still not ideal, especially for what you paid at GCH.

It’s just another one of the “paying more for less” things that Disney has done that is upsetting. I’ve had such a blast at Universal this year that my Disney fandom is basically non-existent. I’m not going to lie and say I’m definitely not going to Disney next year, but it’s a sincere 50% / 50%

There are so many more theme parks and places I’ve always wanted to see. (and a couple home improvement projects that I’d do instead too.)

As we all tell our kids, “I’m not mad, just very disappointed”

I have DLH reserved for September

And I just picked up a reservation that is 10% off my original rate with the seasonal discount promotion! The promotion includes discounts I p to 25% off, but if the rates they cited at GCH are 25% off full price, I’m not sure I should be staying there anymore. It was over $700 per night!

Was this a newly released discount?

I think so, for my dates. The Seasonal Discounts are released on a rolling basis about 2-3 months in advance.