Has anyone been to Dollywood recently? We are planning a quick trip to Gatlinburg/Pigeon Forge and are considering Dollywood for a day and the waterpark for a day. We went once when our kids were 4, 2, and a newborn. Just wondering how Dollywood is these days, lines-wise.

We went May 14 to 18. It was hot, but the nights were chilly so the water in the water park was cold. We skipped the water park and just did Dollywood. We also stayed at Dreammore so we had the “fast pass”. Most of the standby lines were probably about a 30 minute wait at most. With the fast pass it was walk on.

The crowds were not bad and we had no problem getting a table at Aunt Granny’s (the all you can eat restaurant) as a walk up. We did Saturday and Sunday in the park and that was plenty. It felt heavy on the roller coasters with some other rides sprinkled in. We also enjoyed a lot of the entertainment.

We did a day in Pigeon Forge and a day in Gatlinburg. There is so much to do outside the parks two days was not enough. Just remember that this was early in the season so that could effect the crowd numbers. We enjoyed it and would go back.

Laughingplace.com reported on Twitter a few days ago that several signs like this were up at Dollywood 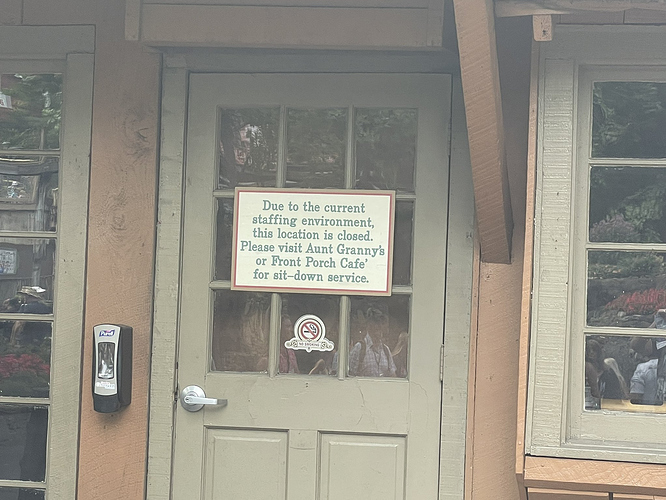 Ooof… this staffing shortage everywhere is miserable. Prices up everywhere and customer service lacking. I miss 2019.

i cant wait to hear about your trip @disneygirlmama. I want to visit to Dollywood ASAP.

This is part of what has me concerned. And I’ve read that the places that are open have huge lines. It’s making me nervous. But we also feel that our girls are going to quickly pass the Dollywood “window” and that we should do it now and save the other stuff in the area for later. Ugh. Decisions.

@Traveler1 thanks so much! I need to look at their resorts and see what the price differential is. My husband says the best roller coaster he’s ever ridden is in Dollywood, so there’s that. I’m torn between wanting to do Dollywood (sweet spot for ages of the kids, I think) and wanting to do other things. We would be there on weekdays so crowds would be down a little but still. Argh. I hate making decisions, haha.

I want you to go ASAP, but I don’t think there is a Dollywood window. There are a lot of thrill rides. And the water park is awesome IMO.

We live within 1.5 hours & work in the area often, so we try to visit when we can. I’d avoid the weekends if at all possible. Traffic on the parkway & heading into the parks is awful and the parks tend be more crowded than weekdays.

As far as lines, the thrill rides like roller coasters at DW and the big slides at Splash usually have the longest waits. We don’t really do those anyway, so traffic and general crowds are the biggest issues for us. I don’t know your kids’ ages & interests, but I think there’s a lot for thrill-ride friendly kids and teens to do at the parks.
Anyway, I do love Dollywood & Splash Country and we normally get Super Season Passes so we can visit both. I’m not sure if we will next year, though. I feel like prices are quickly increasing while the quality and customer service just aren’t keeping up.

Hopefully things will improve, though.

prices are quickly increasing while the quality and customer service just aren’t keeping up.

This happened to our local park too.
I hope this isn’t the new normal.

My girls are 7, 9, and 11. They love coasters but have never done anything too crazy (RNRC at HS is probably the most extreme one in WDW, right?). I don’t remember enough about our last trip…the girls were 1 month, 2, and 4 and had fun, but I mostly kept the baby the whole time and don’t even remember much other than the raft ride and the kiddie rides.

We would do the water park on a Monday and Dollywood on a Tuesday. Do you think it’s still worth it to go, or would it be better in this post-Covid world to wait a few years and do other things instead? (Ripley’s, Rowdy Bear Mtn, the tram, etc.)

I don’t think you can go wrong either way, really. The Smoky Mountains area is beautiful and has no shortage of entertainment. My little girl is 9 and doesn’t do coasters, but she loves going to Dollywood & Splash. Her favorite rides are the Daredevil Falls log flume (similar to Splash Mountain, but much shorter), River Rampage raft ride (a family fave), the cars in Jukebox Junction, the bumper cars, and several others I can’t think of right now. At Splash Country she loves Slick Rock Racer (a 4-lane slide race where you ride belly down on a mat), the Fire Tower Falls area, the lazy river, and wave pool.

I’ve never been to Rowdy Bear Mountain (I’m scared of heights & have vertigo issues, so not for me ). I have ridden on the Ober sky tram a couple of times when I was a teen. It was terrifying

. There is an ice skating rink up at Ober Gatlinburg and it’s fun if you like that kind of thing. Ripleys has lots of attractions that are nice, but maybe overpriced, but the Aquarium in Gatlinburg is fantastic. We’ve spent entire days there before. My DD loves the indoor playground-- its huge and multi-level. I would’ve preferred to just see the animals and stuff all day, but admit it was fun. We also did the glass bottom boat ride last time & felt it was worth the extra cost.

As far as the post-covid world, I have to say that people in this area are pretty laid back about everything in general and things are pretty close to normal here. Some people see that as a positive, others as a negative. I only mention it because I always want to know what to expect when I’m traveling to another area. Aside from staffing shortages, and price increases, there isn’t much different here than from before… at least as far as I’ve noticed. I think you’ll have a great family vacation whether you choose to do the amusement parks, the national park, attractions along the strip, or a combination of them all.

Thanks so much for the run-down! We did the aquarium last time and I do remember it being a really good one. Our girls love aquariums so they wouldn’t mind going again. I guess we’ll just have to wait until closer to time to decide what we’re going to do! If it’s going to rain that could also influence our decision, I suppose. But thank you so much for the run-down…it helps me to know that things aren’t that “off,” if that makes sense.

You’re welcome! I’m happy to help. I know you’ll have a great time no matter what y’all end up doing.