Does this cross a line?

This forum seems to have a keen sense of morality. So I present to you this monstrosity: 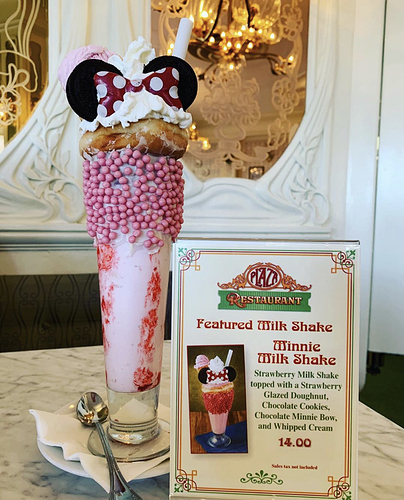 I would joke “why not stick a slice of bacon in it” but chocolate-covered bacon is already a thing at WDW, so it’s only a matter of time before they add it and jack the price up to $20.

Does anyone think that looks appetizing?

If, by appetizing, you mean it makes you feel nauseous just looking at it? Then, yes!

The donut crossed a line for me but the cookie too?

I’ll buy it for you. On condition you eat the whole thing.

I, at times, ignore my sugar levels at Disney. That drink may just put me in a coma.

I can easily ignore this and all those crazy cupcakes, I’m not a fan of buttercream, My downfall would be bread pudding and cinnamon and sugar donuts. It’s the simple things.
But you’re correct they go totally overboard on these specialty desserts.

That’s where the line was crossed for me. Milkshake — good. Iced donut — good. Both — greedy, but good. Great combination. Cookies — WTF?

Actually, the cookies aren’t an issue for me. They serve a purpose. Ears.

But there is just no way I could eat all that. Now sure how big it is. Maybe it is intended for sharing?

I’m going to eat three when I’m there next time just because I freaking can. And ask for a piece of bacon to go in it. Maybe all at once. Then you can point at the fat American and put on your judge hat and feel good about yourself.

Personally, I wouldn’t want it because it’s not chocolate. If I did want it, however, our family would share one.

Gah. Life is so much better when we mind our own freaking business and don’t shove our very strict and personal morality codes down the throats of others unless we’re talking about weapons of mass destruction or some such.

it kinda has a little something for my kids and me… i’d be tempted to order and share it! cookies for the 6yr old, shake for the 11yr old and donut for me

but I could not eat it alone… i’m going to do my best to devour as much bread pudding as I possible can at Ohana in October… bread pudding is my FAVE of any dessert and I hear they have the most fantastic of all!!!

I would totally try to eat that if it found its way to my table. But I would probably not order it because a $14 dessert seems very irresponsible, IMO.

I will say - it’s quite likely that this isn’t as overwhelming as it appears. We don’t have anything to measure its scale.

I agree! The glass is very deceiving, I wonder how much is really in there?

Haha, i’m guessing this is meant to be shared among a family, but everyone would still probably get their sugar intake for the week in one sitting

I’m not understanding this word. It’s not in my dictionary.

Life is so much better when we mind our own freaking business and don’t shove our very strict and personal morality codes down the throats of others unless we’re talking about weapons of mass destruction or some such.

Obesity kills more people than weapons of mass destruction and it’s not even close.

So, I make a statement and your response is to deflect back to me and tell me to “unclench”?

You being fat too doesn’t make me change my mind.

Your comments were rude. That doesn’t make me uptight. It makes you rude. And unapologetic since you rather than saying, “You know, you’re right…it was a bit judgy” you try to make me out to be the one with the problem.

Your comments were rude.

I personally did not think the post was judgy or was in any way intended to be rude or directed at anyone. I thought it was meant to be lighthearted and humorous. I am sorry if you felt differently.

Gentle reminder to everyone to be kind!

The part that really bothers me is the pink things on the outside of the glass. How do you even eat those without looking like a complete savage?

I am much happier when I don’t eat a lot of sugar. None of that looks tempting to me, except maybe the donut on its own.