I planned to buy HP robes for my older 3 kids and then one of the packages looked like it was lost so I ordered more. Then all came in on time, so now I have enough adult sized robes for all of the adults in our party. I know that it’s allowed for adults to wear HP merch in Universal, but…do a lot of people do this? Would be look really strange as a group of 3 adults and 3 kids all wearing Gryffindor robes? I’m not sure I want to, as these are cheap robes that are a heavy felt and look like they’ll pick up every little thing…but it is tempting.

The joy for me of a WDW / UOR vacation is that you can be whoever you want to be. These are safe spaces, literally and metaphorically.

You want to wear robes? Good for you! Have a blast!

Do it! I saw a couple of families there wearing full robes, they did attract some attention but it was all “that’s so cool!”, “How cute”, “I wish I had robes” and “When I have kids I will do this”, never a bad thing.

Don’t forget a good wand. A high powered broom would be good as well.

There are a lot of people who were dressed up—kids and adults! They looked pretty cool, and not out of place.

Absolutely! I love to dress up and get lost in the magic of it all, and I see lots of other adults who do the same. 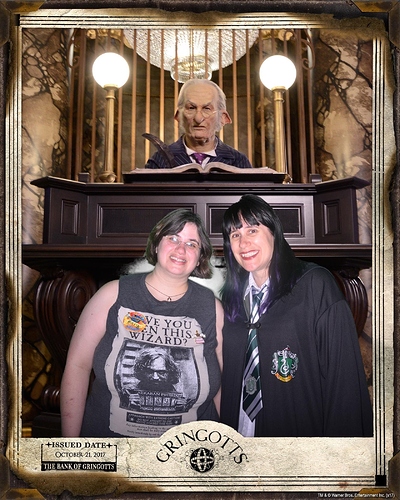 It’s not only accepted, but encouraged. You’ll see people of all ages wearing their HP gear & robes. Having been to WWOHP multiple times I don’t understand why Disney is so uptight with SWGE Jedi stuff and Disney Bounding. Heck, I’ve bought HP merch while at Universal just so I could “fit in” at WWOHP.

I very proudly walked around in full Ravenclaw uniform.

Here’s one for you all. My grand Daughter just got married last year and her father decided to get a ministry license and marry her and her husband to be. I the planning her father was given a scarf from the HP movies, you know the one I am talking about, and he stood up there and married them with this scarf on while looking like a minister.