From Becky:
This week’s strategy is a really specialized one. It’s meant for those lucky few (and I don’t mean that sarcastically) who can stay up late and pay for the After Hours events being offered at the Magic Kingdom. These events are limited to 3000 people, and you get to share the park with just those people from 10 pm to 1 am. Bonus: you can enter the park as early as 7 pm.

Yes, After Hours is an upcharge. And the timing won’t work for everyone. But if you can make it work, I’d argue that it’s worth trading an entire day at Magic Kingdom even if you buy Genie+. Lines during After Hours are non-existent - you will be able to walk on to almost everything. And since you can enter early, you can even see Enchantment before taking advantage of those low waits.

So offering a strategy here at all seems a little silly, but your time is limited so you shouldn’t spend it all on shows, or low satisfaction attractions. This strategy (and alternates!) make sure to account for ride duration, walking times and satisfaction to give you the best night.

I agree with what Becky said, and add that After Hours can pay off big too at DHS, reriding Rise and other attractions that often have very long waits, emphasizing that you can get more done during After Hours than an entire regular day even with G+/$ILL, and a lot simpler to boot.

These events are limited to 3000 people,

This line…I thought Disney didn’t advertise how many people they allowed for these events.

If I knew there would only be 3000 people, I could see the value in this. The fact that Disney could raise the number of people on a whim always concerned me about these events.

Did Chrissy count how many people attended?

I don’t know how Becky knows it’s limited to 3000 people, but I can’t find that figure in Disney sources. The more solid numbers IMO are the wait times for the headliners during the event. 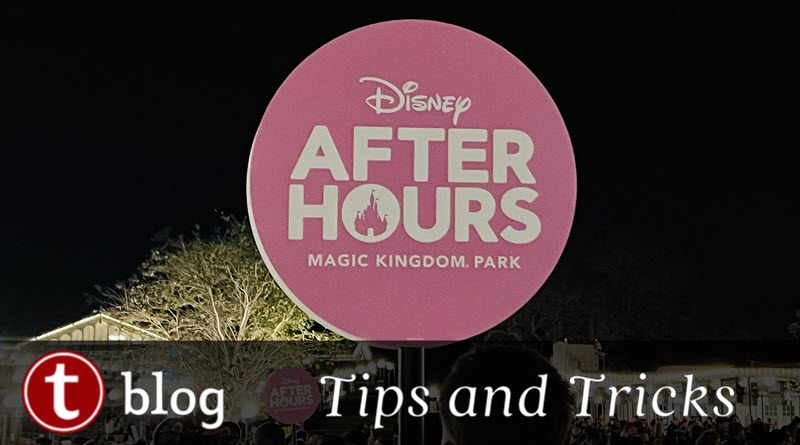 Disney's After Hours promises to offer so many attractions! So much food! So few people! Does it live up to the hype? It

This is the part I worry about. I ready positive reviews for After Hours evens in 2019, so we attended Villians Night. Waits previously reported at 10-15 minutes inflated to 30-40 minute waits on multiple rides.

Yeah…that’s kind of what I recall reading. It seems like Disney starts out having fewer people until the word gets out. After that, the parties start to sell themselves, and they can start over-selling the parties to draw in more revenue/crowds…while at the same time, devaluing the guest experience. So, what guests THINK they are paying for based on earlier reports ends up not being exactly what they end up with.

It is hard to know for sure, though, since Disney won’t report on numbers themselves.

Fair point. I’d keep an eye on wait times on thrilldata or TP during the after hours dates/hours to see if they get worse over time.

you could likely accomplish the following just between 10 pm and 1 am (excluding pre-event time):

Does anyone else think that 1-hour waits for the mountains seems waaaay high for a very limited crowd event? Like, even during a sold out 2022 MNSSHP we still rode BTMRR like 3 times just in the last hour and Space was a walk on for pretty much the whole second half of the party.

But…wouldn’t that be about 20 minutes waits for each of those? Not 1 hour?

I did the after hours at MK on the 16th. It was amazing. Everything was a walk-on except 10 minutes for 7DMT at 12:30. We didn’t do pan as it looked like there was a wait for that. Here’s pictures of the list of attractions and stuff. I didn’t have luck finding it online before our event.

My apologies for the folded paper. It spent lots of time in my pocket but I figure a folded photo is better than none. 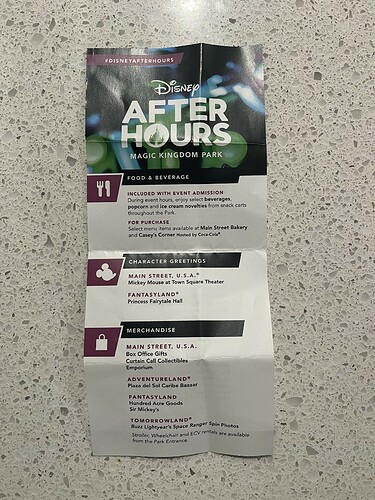 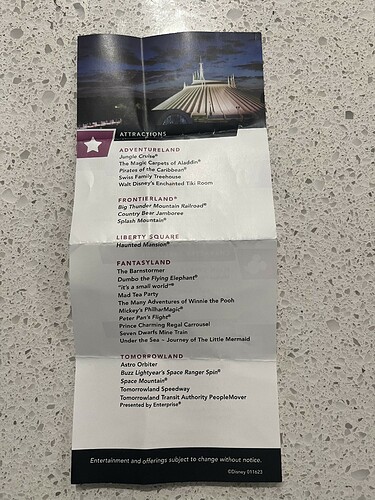 I agree. We have done AH events since they first started offering them in 2018-ish. Always worth the extra money! It’s not hotter than heck and there are no lines. I wanted to do the HS AH events in a few weeks, but it’s the same night as EE at MK. I couldn’t justify the money to stay at a Deluxe AND buy AH when we can get Ee for free.

I love your countertop!!

Thanks! It’s so easy to clean, I love it too!