Day 3 and 4 of Trip report finally!

After the wet and wild day we had on the previous day, we were not going into day unprepared! We dawned our most rain friendly gear and headed out early for ee at DL. No starbucks today, just headed straight for the gate. It was drizzly and fingers crossed it would keep the crowds down. Skipping starbucks and the rain rewarded us with front on the line at the gate. I got super excited when they let a family in at the gate next to ours, however that was quickly dashed when I noticed that the gates remained closed. I found out quickly this was the family of the day that go to open up the park for the day. In all the years of going to DLR, I had no idea that they even did this. We are usually there before the gates open, but are too far back to know what is going on. I wasn’t disappointed that we were not picked. I have two tween boys that are fickle when it comes to stuff like that.

Once the gates opened we made our way to the rope at the hub, where we were again rewarded with close to the front of the pack. Once we were welcomed to “sunny California” by a comical cm (I suggest he not quit his day job), we hightailed it to FL and went straight to PP. We had not done FL in several years and we got an ear full from the tweens. At first the two were insulted that we made them go on all the “baby rides,” then that was replaced by the horror of how violent and inappropriate the rides were (their words, not mine). My husband and I thought it was hysterical how our boys now were catching on to Mr. Toad going into hell, etc. We went on all the rides in FL and then caught a quick ride on buzz, space mountain, the Matterhorn, Pirates, Indy and of course Thunder Mountain!. In all it was a very successful morning. We were able to ride 12 rides and get a bite to eat at the Jolly Holiday before 11 am!

After our successful run at DL, we made our way over to DCA. There we hit RR, TSMM, MJJ. LRR were still closed. Then we went a mad hunt for ice cream. My boys wanted soft serve ice cream. Keep in mind, while the sun had come out a bit, it was still rather cold, but we were on vacation. Unable to locate soft serve (I later learned that we could have gotten it at one of the cozy cones, but we were miss informed by a cm that the only place that served it was on the pier and that was now closed), we opted for a cone from Ghirardelli.

We made our way back to DLH to take a break and grab some real lunch (not just ice cream).

Late that afternoon we headed back to the park and rode BTMRR, IJ, DS12 was super happy b/c autotopia finally opened up. It had been closed due to the rain. Made our way into Star Wars LB. It was our first time and we had fun using our Disney Visa access to see Boba Fett (DS13 was Boba Fett for halloween about 5 years ago).

Throughout the day, we had been trying to find a cart or stand open that was selling the Turkey legs. DS13 is obsessed with them. When I told him about the Disney ones, it became his quest. Throughout the day we went to 4 carts that were supposed to sell them, but they were all closed. That night after we got off of the Matterhorn we found an open stand! I had a happy boy. Once we had secured the turkey leg, we went to Plaza Inn and the remaining family members got the fried chicken. The cms were kind enough to let DS with the Turkey leg sit with us and finish his “meal.” It was also handy b/c he was able to save us the last table available. It was as good as I remember. DH can eat and even he could not finish all of it. I should have gotten the kids meal and then ate what he couldn’t finish, oh well, next time.

We were all tired and decided to take one lap on DLRR and call it a night. We were rewarded with a stop at NOS DLRR station just as the finale of fantasmic began and got to watch the finale from the train, which was a decent view. Then once the finale was over we returned to our lap. As we left we could see the MTRB with all the characters on it. A group of teens from the train were screaming at Tweedle dee and Tweedle Dum and all the characters we waving at us. Such a neat experience that couldn’t have been plan no matter how hard I tried. Once we completed our loop, we made a quick stop at the Candy Palace for a taste of magic to take home.

We decided to forgo heading to the parks today (with all the closures we really felt like we had done everything we wanted to do and we have passes, so we will be back soon). Instead we all slept in and got ready at our leisure. We headed to DD and got breakfast at Jazz Kitchen Express. Nothing like a couple of beignets to top off a great trip! DH got the breakfast bowl and thought it was tasty and DS13 got a breakfast sandwich which looked really good. DS12 and I split a fruit bowl. We all split the beignets, YUM!

Now to plan our next trip! 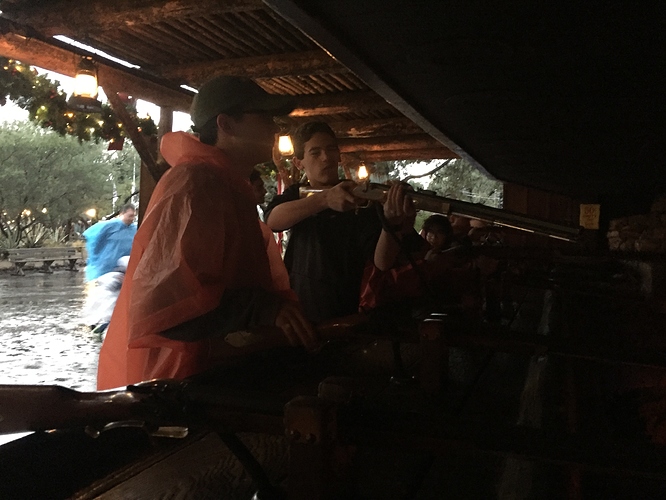 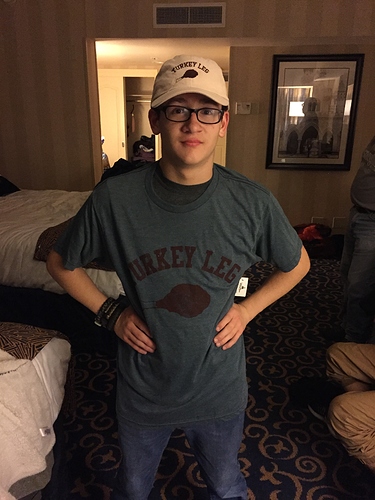 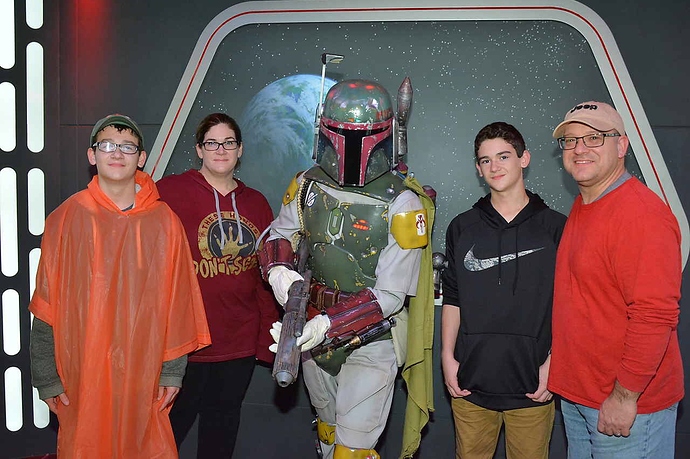 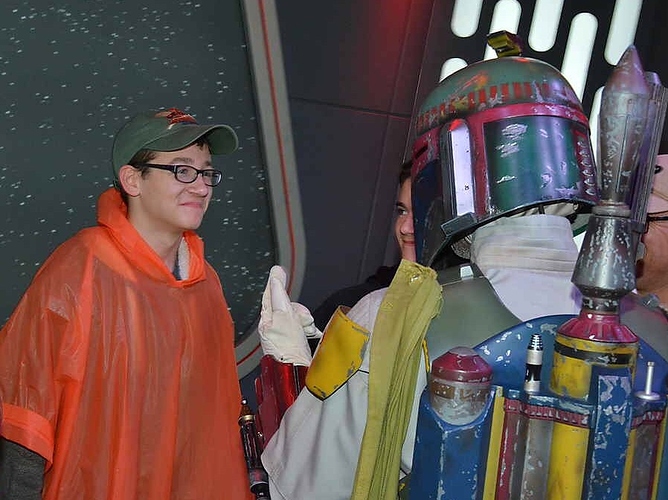 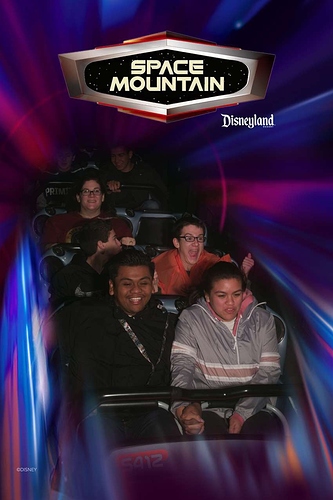 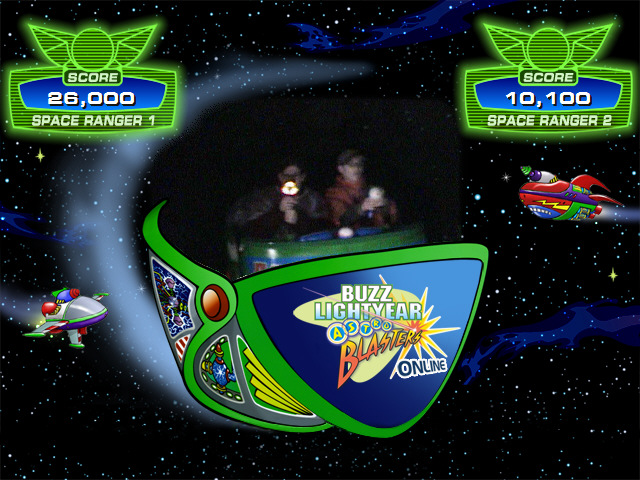 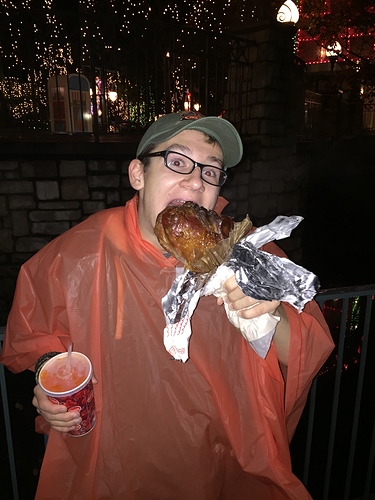 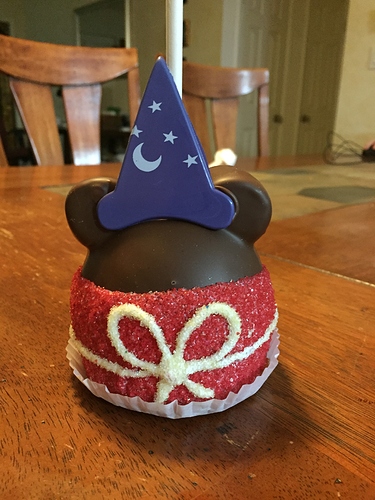 As promised, here is my trip report: The background My family has visited DLR 5 times in the past 7 years. It had been 2 years since we had been to DL. About a year ago some friends of our went WDW and I became obsessed with going there too. My DH HATES to travel and was very reluctant to go. Long story a little shorter, I got my way and started planning our trip. I managed to get $75 per night in GC and then scored free dining! I was over the moon excited! Then one by one, the dominoes…

Day 2 (sorry these are taking so long to get to) Before going into our trip, we watched the weather carefully, so we were not surprised when we woke up to rain

. It was coming down side ways. We weighed the pros and cons of using our ee at DCA that morning and opted the brave the incliment weather (we were spending the extra money at a DLR hotel and by Joe we were going to use the perks!). We dawned our ponchos and rain jackets and head out only to find a break in the rain. It was…

It was insentive to stay CBR during construction.

After reading your post, I think you might interpreted GC as Grand Californian, but it was referring to Gift Card. I am good, but not THAT good!