Hi all, first post here! We’re headed down to the World 4/25 for the week. Spring Dapper Day is 5/2 but it looks like there is a “kick off” on 5/1. Any insight on how crowds will be impacted that Friday? We’re planning on Magic Kingdom, but I’m on the fence if we should keep that or switch to Animal Kingdom. Thanks!

I’m not an expert in this, but when I’ve been in the parks during Dapper Days it seemed to me like most of the participants were out and about, not in line. So the park will feel crowded but lines didn’t seem to be impacted as much as they would be by say a school group being at the parks at the same time. Again, not an expert, hoping someone else has an opinion or better yet, data.

Welcome to the Forum! Events like Dapper Day are already accounted for in the CL predictions. Make a Personalized TP for what you want to do and optimize it for the dates in question if you want to get a better idea of what the impact may be.

I love Daper Days! IME - Most of the participants are over at Epcot in the World Showcase eating & drinking. You’ll see a few ppl hopping to other places, but generally they’re walking around “to be seen” than in ride queues.

I agree that I’ve mostly seen the participants in World Showcase. Haven’t noticed there being too much of an impact on crowds, but it’s fun to see all their attire.

Excuse my ignorance, but what are Dapper Days? 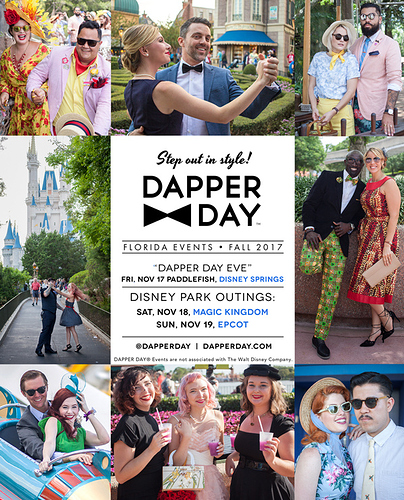 Doesn’t look like their proposed itinerary will affect MK park on 5/2:

"Step out in style!" DAPPER DAY® Celebrates refined style from yesterday and today with fun accessories and events. Join our elegant outings to museums, Disney Parks, and more, in LA, Orlando, and Paris!

When we’ve been in MK on a Dapper Day, there hasn’t been a discernible impact on our touring…except if a large group of them decides to ride an attraction. But honestly, that’s like trying to base your touring plan on if a tour group gets in front of you, which is impossible. And I will say that since a lot of the Dapper folks are locals, they’re not trying to do a ton of attractions on Dapper Day…for example, a large group of them rode the PeopleMover, which swelled the line, but not a huge impact on anyone’s day.

Welcome to the Forum, hope you have a great trip.

Our trip was 11/11-11/21 and I’d never read a thing on the Forum about Dapper Days having any sort of impact. Despite the fact that all of our park days felt VERY manageable crowd wise, including a MVMCP that allowed us to do every party themed ride and show/fireworks, etc., our Sunday at Epcot on Dapper Days was miserable! It was a sea of people in WS. Shoulder to shoulder with lines like every food truck was FOP. I would never knowingly go to Epcot on Dapper Days again. The line for even the Gran Fiesta was crazy long, instead of a normal walk-on…

You’ll see a few ppl hopping to other places, but generally they’re walking around “to be seen” than in ride queues.

This is probably true for many, but I also saw a TON on the slower rides at EP.

I think the rule of thumb is probably anything that won’t knock your hat off.

Agreed. However, OP was concerned with Dapper Days effect on MK queues. This was my response to the MK question.

We are checking in to Poly on 5/2. Planning on dinner in DS, but may be back to the hotel in time to see all the dapper folks wandering about! I think it will be fun to see! (Thankfully not planning on Epcot on 5/3)

“Anything that won’t knock your hat off”

Went on Dapper Day to MK, rides didnt seem extra packed. Seemed like it was mostly locals enjoying dressing up. I actually had fun watching everyone dressed in their best!