I have a trip scheduled for a long weekend at the end of September with my 7-year-old two Universal. Given the Delta variant outbreaks in Florida, I’m getting concerned about going and wondering if I should postpone. I picked this weekend because my son is 3 days off from school, I would have to pick another weekend when he’s out of school.

He had Covid in June and I am fully vaccinated. I was exposed when he was exposed and never got it. But that doesn’t mean we’re impervious. On one hand I don’t want to be one of those people that infects everybody else, put a drain on the healthcare system, or quarantine, but on the other I don’t want to be overly scared by the constant barrage negativity from the news. I continue to monitor the infection levels and I will make a decision after Labor Day.

I am posting this because I would love some positive empathy. I am not looking to be swayed either way. But I’m also wondering if anyone has hospital data or some other hard data that I could review. I thought I heard that Orlando is in a state of emergency? But now I can’t find credible evidence that that is fact. Is there a website that I can look at to see if the hospital beds are full? I recently read in the economist, which summarized some research, that people who have had infections within the last 3 to 6 months do have some immunity. But I’ve also read that kids don’t seem to be developing immunity. Instead they just flush it through their system. But the Delta variant might be different.

Ugh! I have no idea what to do. But at least I have some time to think about it…

There is a lot of info in the Covid thread, especially in the last three days. There is some speculation that the peak infections have occurred and it will be a few weeks before it will reflect in a decrease in hospitalizations. I will post these two links from yesterday for data. 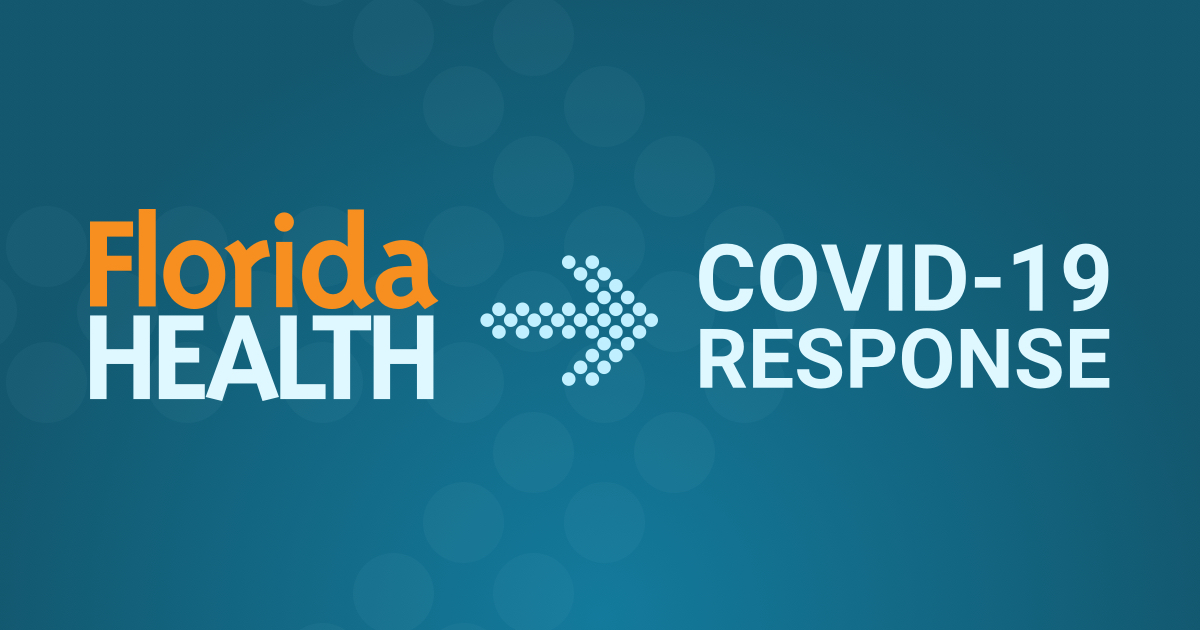 The state of emergency seemed to be more about asking for masks. 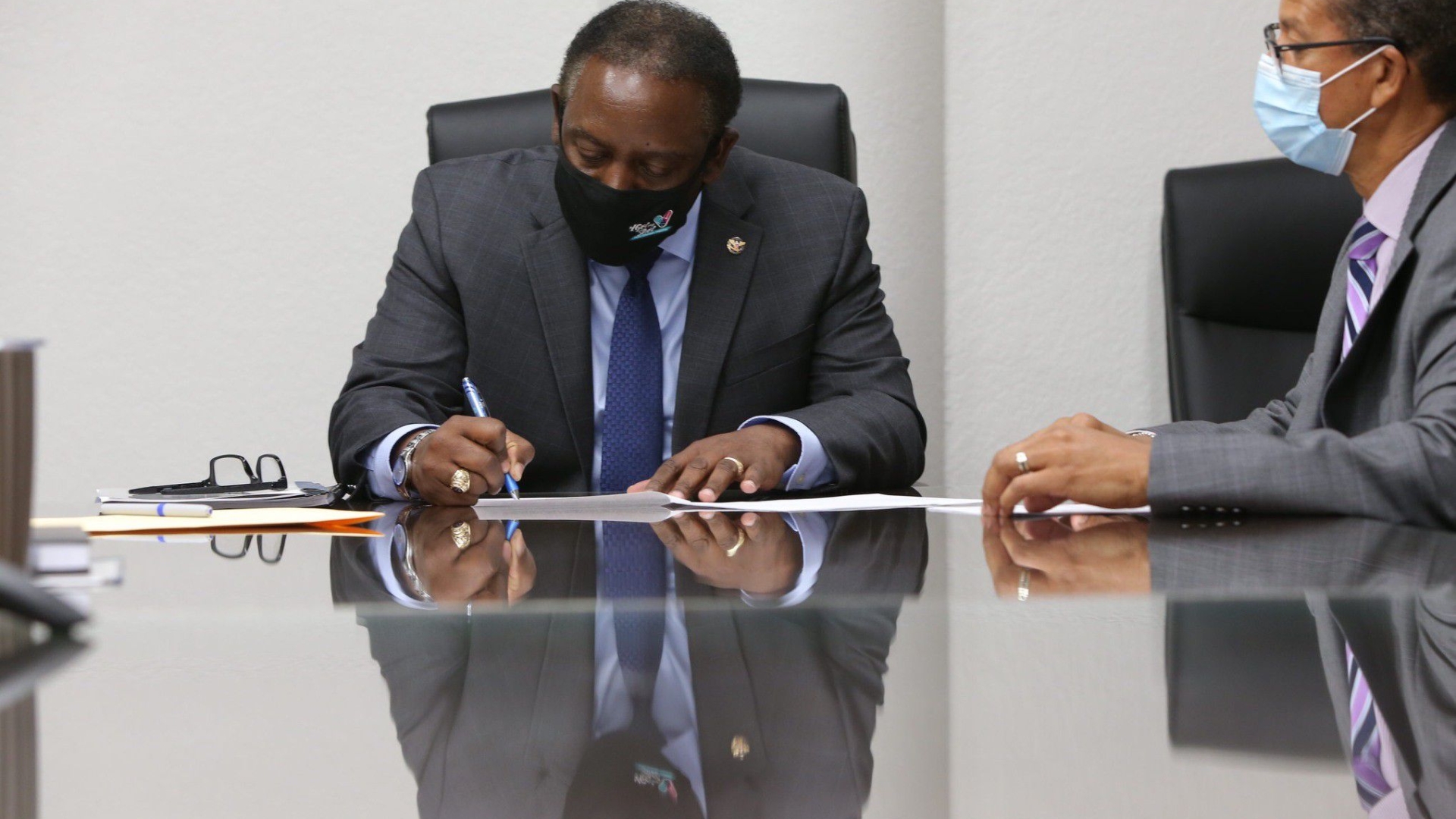 @amvanhoose, have you come across any data that shows that children don’t develop antibodies if they had Covid? Is it safe to assume a June case was delta?

Oh thank you. I think I saw the Covid thread in Feb under WDW.

I hope that theory is correct! I’m more sensitive than in the past as my fully vaccinated immunocompromised mom passed from Covid in June when she got it from an unvaccinated adult who had tested negative. (No blame there.) I have an arm of the family who are much more concerned about Covid than me and I’m trying to figure out where I stand. I appreciate the additional links!!

I live here, in FL, an hour away from WDW. The hospitals are all full, extra refrigerated morgues are being set up to accommodate. The Orlando area has been asked to conserve water b/c they use o2 to clean drinking water and there’s a shortage. The local mayor has asked all, regardless of vaccination status, to wear a mask indoors and in places you can’t distance. WDW & Universal reinstituted its mask use indoors. There is a lot to slog through on the covid thread but I would recommend starting at the bottom and working up to find the latest hospital and case data from FL. The last time I was at the parks (FRiday) I saw more masks outdoors, and that’s what I did. I only took my mask off to eat/drink.

I do not think Universal has an indoor mask requirement. It has asked people to wear them but it is up to the individual?

That’s what I thought to but when I did a google search it said same as Disney (I guess I got an old link???). So, I just went to their official web page and you are correct, thank you for verifying: Operations and Safety Updates COVID-19 (Coronavirus) | Universal Orlando Resort

have you come across any data that shows that children don’t develop antibodies if they had Covid?

I haven’t seen anything data-wise differentiating children specifically. But the protection given by a previous infection is extremely variable. Milder cases do seem to correlate to less protection and more severe cases to more protection. (So since children tend to have milder cases, it would seem logical they would have less protection. I just haven’t seen a study specifically on children concluding that.). It’s not a definite indication at an individual level, but a correlation at a group study level.

Is it safe to assume a June case was delta?

Yeah, that’s a highly relevant question. Pre-Delta infection doesn’t seem to provide as much protection against Delta as it did the prior variants.*

Whether DS likely had Delta or another variant would depend what part of June and what area of the country. End of June would be roughly a 50/50 shot, maybe? Anything earlier than that it would he less likely. Examples: 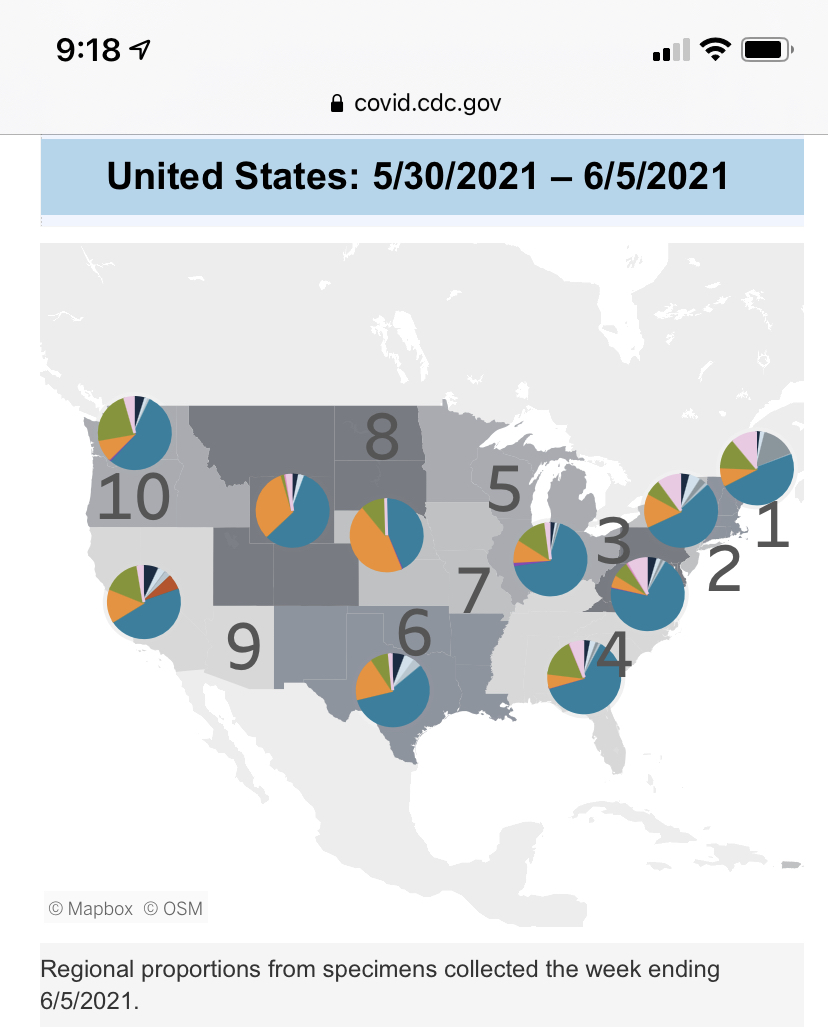 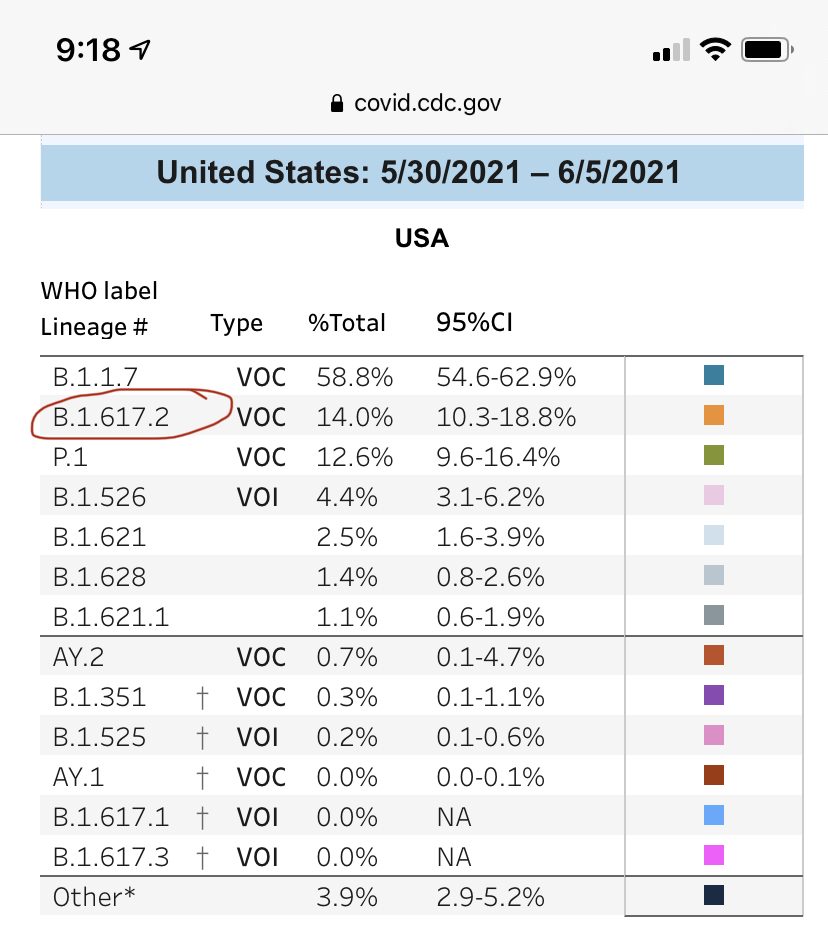 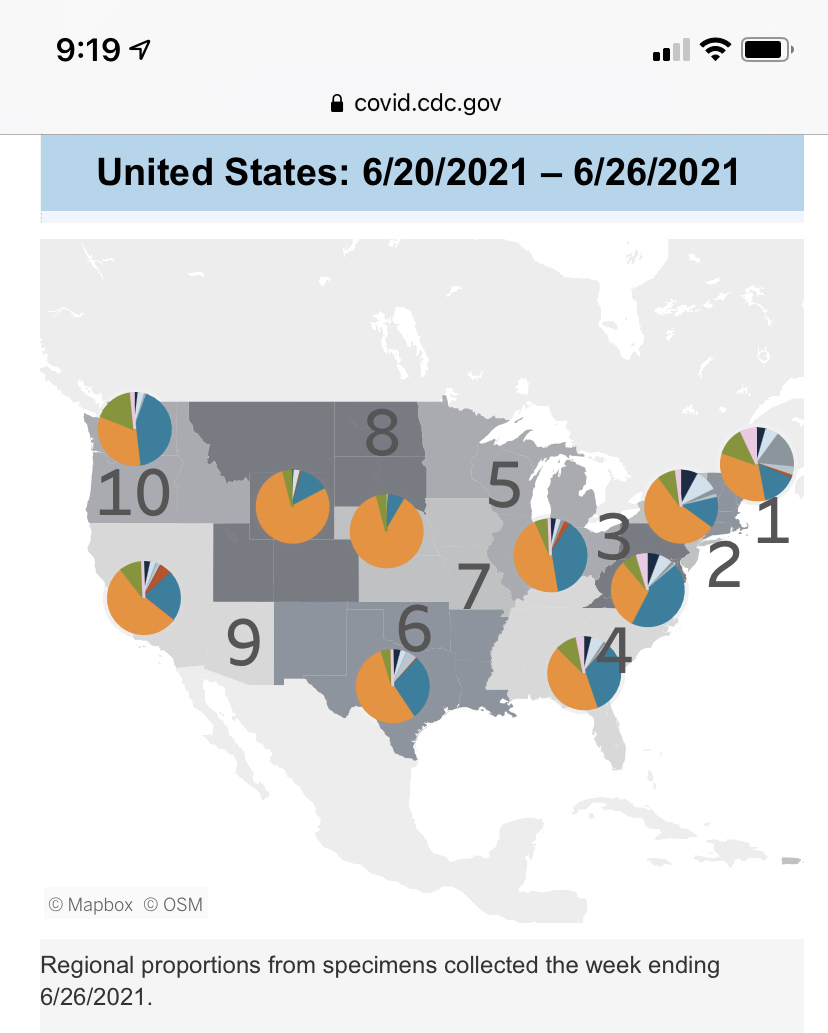 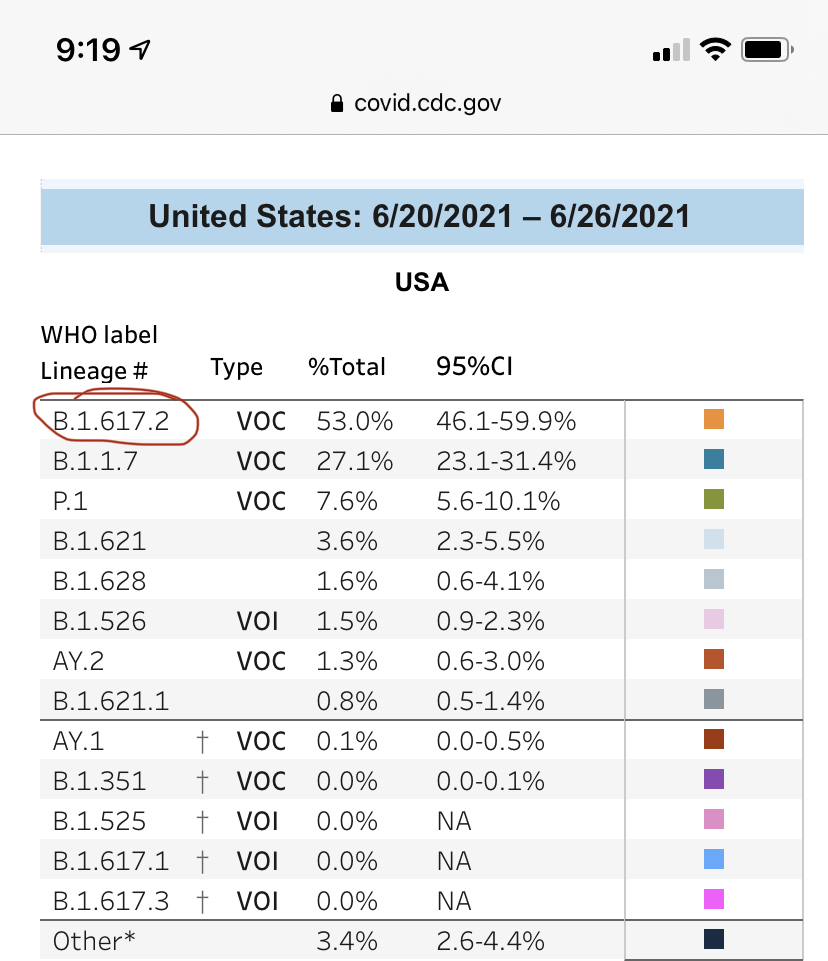 CDC’s home for COVID-19 data. Visualizations, graphs, and data in one easy-to-use website.

*Note: There was one recent study out of Israel that seemed to indicate prior infection was better protection than being vaccinated, but taking a look at how the study was designed, I’m not sure that’s good data. We’ll see what peer-review says.

Confirmed from TMs I know. Universal doesn’t have an indoor mask requirement. It’s “suggested” you wear them. Mask enforcement, sadly, is down at Universal. Which really sucks because at the start of COVID I thought they did the best job at reopening and handling all this.

Make the correct decision for you and your family, first and foremost.

My suggestion is you can cancel hotel reservations a week out with full refund and I think Universal will work with you on tickets.

My suggestion is to wait a week or two and make a decision before your hotel cannot be cancelled with refund. So if your trip is Sept 24-26 make sure to cancel by Sept 16. If cases are plummeting and things are improving, you can keep the trip. If they are not, you can make the decision to cancel.

I would love some positive empathy

I totally get it.

I’m in a similar / different position. Assuming my mid-October trip can take place, I don’t think I actually want to go. I’m fully vaccinated and recently went on a weeklong cruise, so I’m not hiding in my house. But boarding was contingent on taking a COVID test and getting a negative result. Masks were requested but not enforced. Adherence was reasonably good.

For me the concern is being stranded in Florida — flying back to the UK would require a negative COVID test. If mine was positive that would cause all kinds of complications. And if I actually got sick …

Not worth it. I can wait. I’ve waited so far. Albeit with occasional whining.

Don’t poke the bear. I can easily go off on another travel ban rant if you want …

The EU is banning US residents…

The European Union recommended Monday that its 27 nations reinstate restrictions on tourists from the U.S. because of rising coronavirus infections there.
Read the Latest

First, thank you for sharing. I’m currently in Prague for work and we were just planning a trip back here in October. I hope Czech doesn’t take their advice. It’s shame because Colorado has done very well with Covid.

The EU is banning US residents

Good. It should do. You people are nuts. Except none of you will really be bothered because you don’t even know about other countries, and most of you seem to think the one you live in is better than any other countries which might exist.

Oh and to be clear, the EU is not banning U.S. residents, they are advising that the 27 EU member countries ban. Each one will decide what they should do.