I’m not terribly worried about having any mosquito issues while we’re at WDW the week after Thanksgiving (we’ve gone at that same time for the past 6 years and never one bite), but it is Florida and I happened to see some Bug Bands at Target today so thought why not and picked some up. I think Disney does excellent pest control as well. Just curious though if anyone has used Bug Bands and noticed if they do/don’t work? 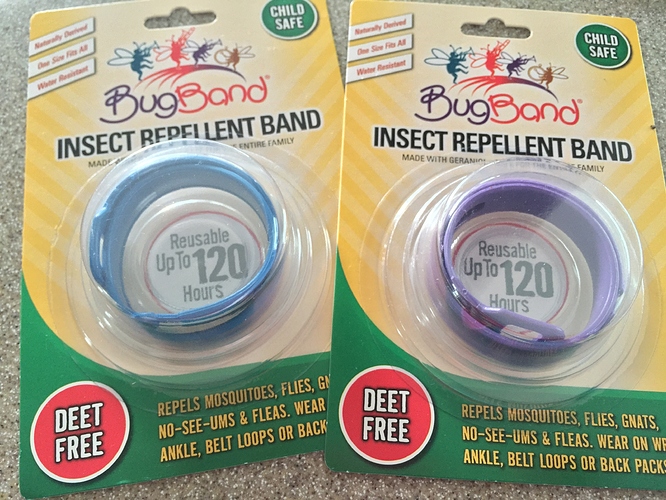 We’ve used them camping and found they are not as good as expected. We ended up using the bug spray after wearing them for a few hours and getting bites. I’m excited that Disney is offering free bug spray at the parks! Did you see that? It’s one less thing to pack!

In the various clinical trials I have read about “DEET Free” means “does not work”. Granted, DEET is nasty stuff, but used properly and according to the manufacturer’s instructions it is safe and effective.

Consumer Reports tested a bunch of insect repellent products. These bands keep insects away from whatever joint you put them on, but that’s all.

Products with DEET and Picaradin were the most effective. 100% DEET was not more effective than 40% (and higher concentrations of DEET will damage clothing; we sprayed some on a screen printed shirt, and it made the ink runny until it dried). In tests, mosquitoes landed more frequently on people sprayed with DEET, but didn’t bite. With Picaradin sprays, they were less likely to even land on the testers.

Thank you for this info - good to know! I’ve used sprays here at home with both DEET and Picaradin and they’ve both worked…wasn’t sure about the bands though. Good to know about the clothing…I hate to spray it on the kids more than I have to so we sometimes mist it on the backs of their swimsuits etc…in addition to a light misting on their arms/legs (us too). Interesting find about the DEET vs Picaradin and the mosquitoes not even landing!

Thanks for the info guys!