What are some of the best Disney World podcasts to listen to? we are at 137 days out and i travel in my car a lot for work and need some advice. Thanks!

What are you interested in? News/rumors, trip reports, history, listener questions?

I’ll check it out. Probably any podcast that will give me insight into our feb 2020 trip.

For trip planning, try Be Our Guest WDW Podcast and Touring Plans Podcast.

It’s ended now, but I’d suggest back episodes of Backside of Magic.

“Podcast the Ride” has some fun Disney episodes.

WDW Radio is my fave!! I’ve tried others but can to keep listening for various reasons (poor grammar, whiny voices, snobbish reviews of anything less than Club Level Deluxe and Signature restaurants (a lot of us not made of money do go to Disney and hearing the things we can afford be poo-pooed is off-putting), other things that get on my nerves). Lou with WDW Radio is approachable and he has actually listened to feedback people have given (like when he does live restaurant reviews they have cut down on the eating sounds dramatically - the early ones were audible chewing, lip smacking, etc. but he got more than a few comments about it (reading reviews at least) and they are much easier to listen to now) and made changes. And he doesn’t limit himself to the best categories. (He is Marvel and Star Wars crazy…but I just tolerate it or skip those episodes.) My favorite part was when he did a Pandora review, he was so careful NOT to give anything away that would spoil things - and he tends to be anti-spoiler across the board.

Yea!! Another fan on TP forums!!
Here’s me taking an extremely necessary walk… 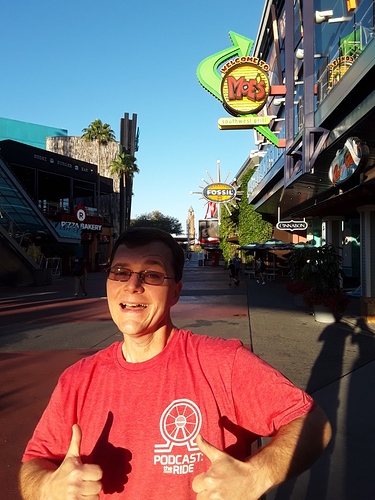 snobbish reviews of anything less than Club Level Deluxe and Signature restaurants (a lot of us not made of money do go to Disney and hearing the things we can afford be poo-pooed is off-putting), other things that get on my nerves)

LOL. I think I know the podcast of which you speak. I was a Patreon but just cancelled noting their disdain for anything not Deluxe was off-putting.

OP - my favorite Disney podcast - and really it was my Disney gateway drug - is WDW Prep to Go. She does very in depth trip reports. I find it most helpful to listen to trip reports from around the same time of year at least to start. For strictly trip planning purposes and trip reports the other pod already mentioned - Be Our Guest - is my other go to.

For Disney history I like The Walt Daily (usually about 3 mins long), WEDWay Radio, The Thirty20Eight, and The Tomorrow Society Podcast.

For news it’s Be Our Guest, The Disney Dish with Jim Hill (featuring Len Testa of TP), and The Dis Unplugged (Pete can be an acquired taste).

For alternative perspectives I listen to Dis Down Under, Disney Dream Girls, Gays do the D, and Welcome Home (focus is DVC owners).

DIS Unplugged was actually one I have quit and then listened to only certain episodes if I am interested in the topic. They can be a little snobbish towards non-suite/deluxe experiences.

Huh - I hadn’t noticed that with them. Now I’ll listen for it. They recently started a new push towards offsite hotels. I think that’s refreshing as it seems to be a huge divide in the Dis community.

Actually I listen to them on the Dreams Unlimited podcast which covers other non-Disney stuff. Maybe they are more snobbish there. I mean, they chuckle about it, but as someone who really doesn’t ever do concierge or suites or club level or even deluxe, it can be a bit off-putting to hear them joke about their agent checking out the low end of things while they are in a 2-bedroom suite.

early ones were audible chewing, lip smacking, etc. but

I find that as Disney podcasts / influencers make more money they tend to lose perspective. I remember thinking we’d never be able to afford a Disney trip, let alone stay onsite. I also prefer the perspective of people who don’t live in the Orlando area as it’s just a different head space to plan a trip from a distance.

I listen to Dreams Unlimited intermittently. I was planning a cruise and found their videos helpful but it had me chasing suites and concierge that we simply don’t need and would be a huge waste of money for this particular cruise. I had to put that pod on hold.

Agree! I do like that the “influencers” are now supposed to disclose when they are hosted or sponsored. It makes it much easier to sort of filter their review. (I don’t care how neutral they say they are…I know if I’m given an experience for free I’m much more likely to take a positive view of it than if I’m paying - even if the meal quality is the same.)

Yeah - with DU I focus on the things I’m interested in and mark the rest played. I do appreciate it when they have the agent on who stays “commoner class” like I would - I just don’t like how they mock her for it.

when he did a Pandora

I agree with all of this. Lou is great and I love his podcasts…except for episodes with Little Timmy Foster. And it’s a shame because those are usually the Top 10 shows that I like to hear about. Tim just interrupts and drones on and on and just wears me out.

Yes. I’ve more than once found myself talking to my iPod like “Just get on with it!!!”