We have two preferred room reservations at All Star Movies this May. I believe they have begun refurbishing the rooms (similar to Pop Century), Is there a way to request refurbished rooms through Touring Plans? If we make specific room requests can we add that we would prefer refurbished rooms if the ones we pick have not been refurbished yet? Has anyone stayed at one of the refurbished rooms yet?

I don’t know anything about it being refurbished, but if that is your priority you should pick a random room, erase all location details from the fax, and say in the free text box that you really want a refurbed room.

I read somewhere they they started with building 10 so I would assume they are working from 10 on down. Not sure if 10 is finished yet but would suspect it is since they started the reno in Feb

Thanks. I made the request for building 10 and keeping my fingers crossed.

Did you get a refurb room in May? Wondering how they were?

Yes I did. The room was great. It’s just like the refurbished rooms at Pop.When we were there all the rooms in Bldg 10 were either finished or closed while they were working on them., so if you get that bldg it will be a refurbished room. Here is a I picture. 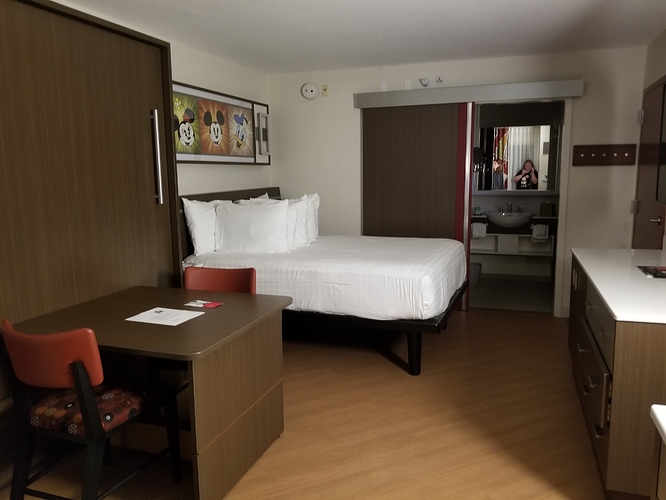 We are thinking of staying Value resort next trip and now it looks like Pop and ASMo are refurbed (well by my trip time) so we have options. Thanks for the pic!

Did they have coffee makers and mini fridges in the refurbed room?

They did at Pop; I assume at ASMo as well, but dont know for sure.

Oh, and all rooms have the mini fridges, refurbed or otherwise.

We were in building 1 and it was refurbished. They did a really good job with shelves/drawers etc. to make it seem bigger than it is. We were happy with it.

How about coffee makers? And I’d so, what type of coffee maker? (I’m really hoping I can bring my own k-cups and avoid venturing out of my room before I get caffeine into my bloodstream!)

I didn’t actually use it so I’m not 100% positive. I did some research for you this morning and the consensus on other sites and blog videos seems to be that it is a single cup brewer. It’s Cuisinart brand. But instead of the cups it uses flat sealed filter-type brewing. The drawer in front of the coffee maker has a bunch of tea and coffee packets, sugars, and creamers.

Thanks so much! Seems like those flat pod coffee makers don’t quite have quite as many varieties of coffee on the market. I’m actually thinking of bringing a little 4-cup maker of my own again this time. My eyes don’t like to open without a nice strong cup of coffee in my hand!!!