Oh I misunderstood, I thought you had sorted it out once and then discovered another issue.

So I GS explained that the conference tickets are on a different system and it’s a known problem. She was gone for a while, like 10 minutes or so and came back and said I will be good for the rest of the week. I just have to make my park ressies again. This week it shouldn’t be an issue but if it was a more crowed time that could really screw someone up.
So I went to my tickets on MDE and I still have one of my 2 after 5p tickets and my park hopper for today but she added 3 complementary 1 day park hopper. So somehow I walked away with an additional tickets. So I’m totally confused.

Ok I’m in. Just made it off of MMRR. So cute. First time on it. After I snuck a phone call to my DD. She knows I’m in Florida for work but not Disney. She’s afraid of everything, even the simplest rides so I know she wouldn’t be mad about missing rides but come on, it’s Disney. Of course she would be upset. I had to think of an excuse for the background music, just told her I was in the lobby and she bought it.

Now in line for SSD, this will be only the 2nd time I have ridden it. Posted time said 30 minutes, it doesn’t look that long to me but we shall see

just told her I was in the lobby and she bought it.

hahaha the lies we tell our children

Child: Is that a cookie in your mouth?
Parent: (mumbling w/ falling crumbs) No, no honey, it’s a Brussel sprout

Off of SSD in 22 minutes. Now in line for TSM posted at 10 but straight on walked up to Mr Potato Head so it’s more walking than anything.

the “join boarding group” is still live right now at 758am. Never saw that before.

Thanks for reporting! Were you able to confirm your party before 7:00?

That’s what’s totally strange, I was able to get a boarding group no problem this morning. Group 38. I have no idea what’s going on but somehow I now have more tickets than I came with.

Congrats and enjoy! Disney is currently making improvements to the BG process.

Share your story with the CM. Maybe they will give you a special FP.

We had a ticket issue (their fault, not ours) last month when rope dropping AK. I explained to the CM and she (after a little push back) gave us passes for FOP.

I will admit, I have not been on the this since they added the Donald Dick theme

Everyone is just going to let this AC go? I think that is worse than a robe drop?! Just teasing you I am loving the trip report.

I was going to leave it alone.

I didn’t even notice it

Omg haha. What do I have on my mind. Sorry!!

So somehow I walked away with an additional tickets. So I’m totally confused.

We had a major ticket snafu in 2018, first morning in the World, bright and early at MK - Disney’s fault.
Disney came thru with their Magic and we wound up with an extra park hopper for each member of our group.
As we had a non park day planned, we used our extra tickets.

How are some of you guys able to live reports? This is hard, never thought it would be since I’m alone. Kudos to those that do it so well!
So after the little mishap this morning, I got quite a bit done at HS until I couldn’t take the heat anymore. MMRR, SDD, TSM, break for some food at Woody’s, some shopping. Got a Grumpy Tshirt for DH. Then onto RnRC. Chickened out in ToT. MillFalcon(forget the appr) a drink at Oga’s, made a droid for DD and finally to end my day there Rise. I could barely walk back to the bus but thank goodness there was one waiting. I think I have shin splints at this point from walking. Probably need to slow down a bit.

Got back to the room around 2 and thought about some pool time until I had a couple texts on my phone from the guys from work. I’m wasn’t ready to deal with them yet. I work in a control center for trains, like air traffic control but for trains. There are 68 of us on the roster and guess what, I’m the only female. I’ve been doing it 25 years next month and I’m so used to the testosterone, but didn’t want to just sit around drinking with them, yet anyway. So I took a nap, and a long one, work up just about 5. Since I have a PH was going to go early to MK but I guess I needed the sleep. Got dressed and I’m currently waiting for the bus. This is the first time I’m waiting more than a few minutes for a bus. As I type, here comes the bus. 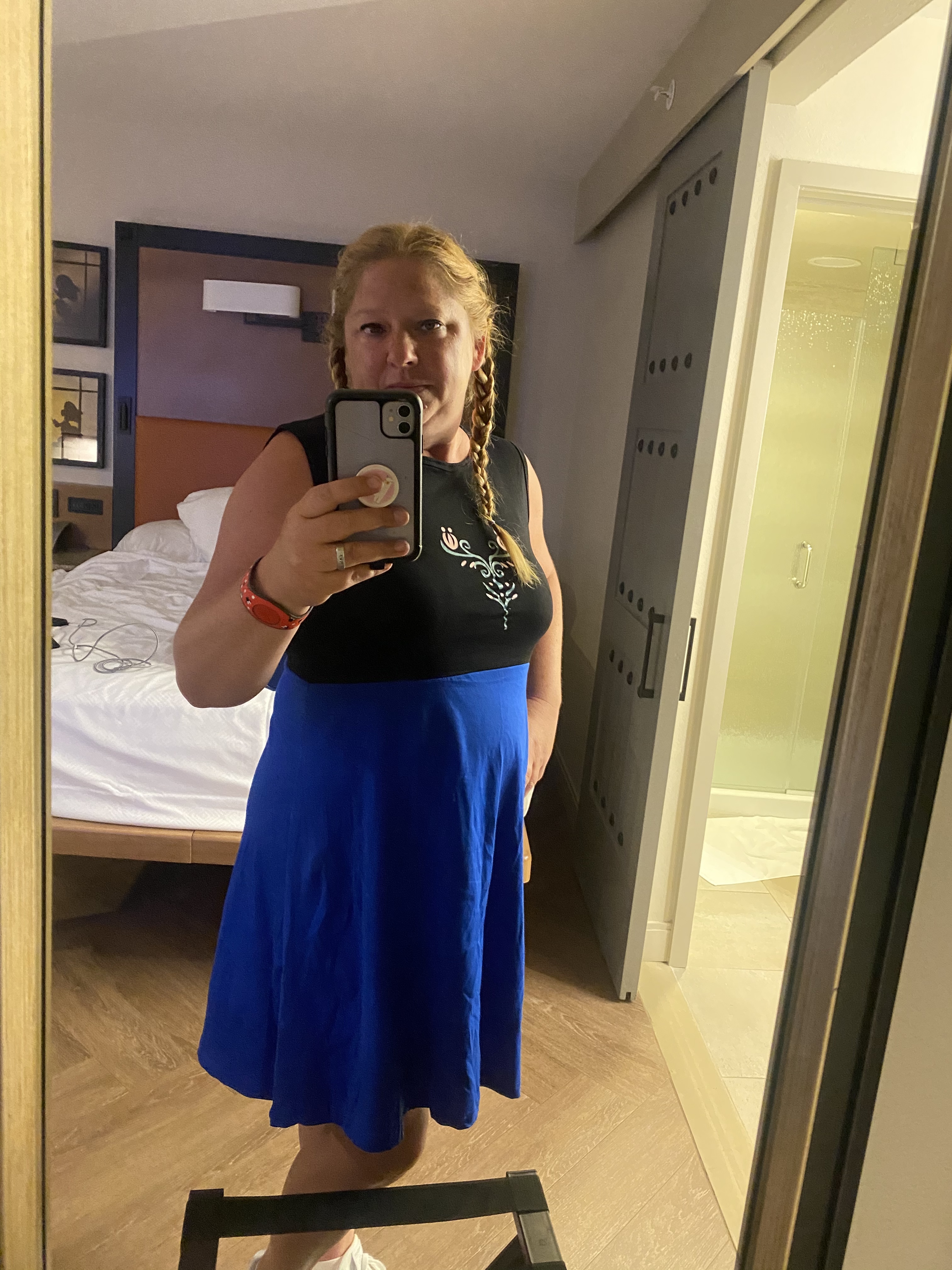 Super cute dress! Did you make it yourself with a pattern?

Oh God no, online. Google Ambrie and they have a ton of cute things. Love their leggings but way too hot for down here right now

I love your “oh god no” response, I feel the same haha. I have such admiration for creative people and have many friends/family that make Cricut masterpieces. I…am not one of them. Have a great evening! Fun following along so thanks for posting!