I’m heading to UOR at the end of February and I plan on spending 4 days touring the 2 parks. I was thinking day 1 we would spend the day touring WWOHP in both parks since my family are giant HP fans. We’re staying at the HRH so we will have EE and express passes. What are thoughts on if you can easily do it all in one day?

WWoHP is the best part of UOR. Why do you want to squeeze it all into 1 day, when you’re there for 4 days?

I have no doubt we will go back many times. I was just planning the first day.

I’m planning a first trip to Universal and plan to do WWoHP our first day too. There is a great plan by Jadesfire21 that I’m going to try and follow.

I cannot comment on the timing of the plans since I haven’t been yet, but I bet someone on the forum will have some advice for you.

I wouldn’t rush it then. Hit both sides of HP the first day, but don’t try to do everything.

Also, WWHP is the most crowded area of the parks so taking your time and spreading it out over several days may be a better idea to avoid getting frustrated.

You should be able to get through most of the WWOHP in both parks in a day. But it does depend on how many shops you visit and time spent there. It’s a good idea to choose what you want to see and do and then make your plan. This map/list of DA can help you decide what to do there on your Potter day.

You’ll be fine. There’s “doing it all” in terms of rides and experiencing a bit of everything else, which might be completed by early afternoon, and then there’s really doing it all and taking it slow with shopping, eating/snacking and exploring, which could expand to fill as much of the day as you’d like.

I wouldn’t try to fit everything into your first day. The WW gets so crowded that it would potentially be miserable.
I would suggest hitting it at EE, maybe jumping on HE at opening and explore the other side, but when the crowds get uncomfortable head out and do other bits of the park. Head back again later and when it’s dark too.
Repeat for your other days and I’m sure you’ll see it all and repeat what you want to.
Have fun

This is sort of what I was thinking. When I used the TP plan it seemed like I would be able to get to everything in a day. I imagine we’ll be flexible and go with the flow. I would think having 4 days of EE should make things easier. Day 1 will mostly be getting the lay of the land…

If you are going at the end of February, you’ll be fine doing both areas in one day. I’ve done it multiple times without Express Pass.

If you really don’t wander out into USF / IOA and only use the Hogwarts Express & etc… you can do all the rides and see a lot. You probably won’t see all the shows - The Tales of the Beedle and the Bard show is not to be missed!!

Here’s my HP plan for my upcoming Feb. Trip. I have pretty much everything planned out. I start in DA and then take the HE to Hogsmeade and back again later…

Another point to consider, early entry is mostly in WWHP. So you are going to start your day there everyday.

I’m not a huge fan of crowds. If I’m walking through them it is fine or doing something in them that is fine. But, meandering in a crowd while trying to look at stuff, I have a really low tolerance. So, for me, even the Feb. crowds in WWHP about an hour after open was too much.

Our first visit was Feb 2020 for a week. So, probably pretty close to your visit for crowds. For our first four days we started with whatever was open for EE which meant we rode one ride then went to WWHP to ride there and do spells/meander/admire. Then about an hour after open, we’d leave WWHP to explore one half of one park. We like re-rides, so we rode the things we liked a few times. Then maybe at 3pm we’d come back to WWHP and watch one of the WWHP shows. Watching those shows are good during crowded times. Then stay there until we were tired.

Another point, without express passes it can be a little bit of a time suck to take the train between the parks. But with EP’s it is pretty quick. We mentally considered WWHP as its own third park and we’d take the train just to get ice cream.

Touring Plans has a two part touring plan for doing the Wizarding World in one day. It’s totally doable and lots of fun.

I had made a plan to include some extra things. Now be aware that this is on a lower crowd day. Starts at USF and goes back and forth and ends in IOA. 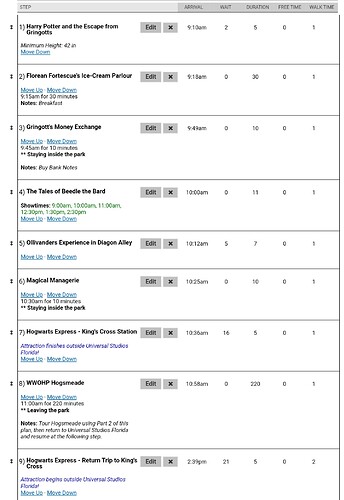 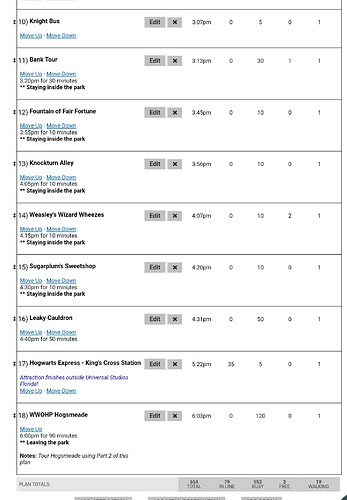 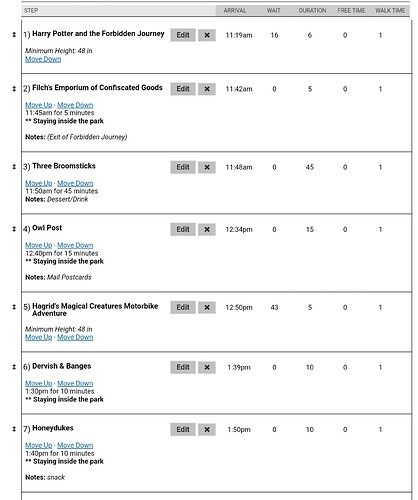 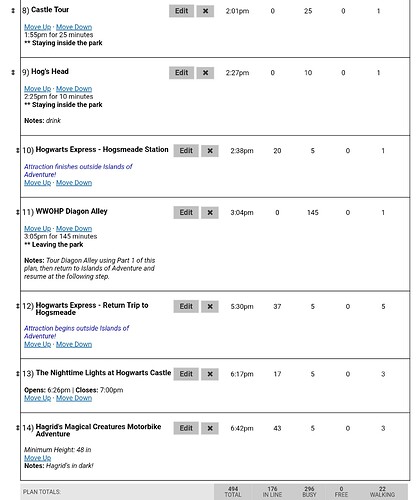 Does the nighttime lights at Hogwarts Castle include fireworks?

It’s just projections except for brief fireworks at the finale.

The nighttime show is cute, but way too short. Plus, it just kinda tampers off as it ends… I like it and will watch it. However, I’ll always take a night ride on Hagrid’s versus the castle show!

It’s really going to be your preference. You’ll need to be in the area at least 30 - 40 minutes before it starts. IME - It rarely starts “on time”, It’ll start once it’s actually dark outside - way past sunset.

What is the castle tour?

You can do a self-guided tour of Hogwart’s Castle, just ask a TM at the entrance and he will direct you.