Hi! I only have 1 day at Universal Studios (crowd level 5) and IOA (crowd level 3), I will have the early park admission to IOA, park to park ticket and the unlimited express pass. I can’t seem to find a touring plan that addresses this (there is a “Universal Orlando Highlights One-Day/Two Park Plan with early entry part 1”, but there isn’t a part 2 - if anyone has that, would love that too). We will be skipping the Dr. Seuss area. Does anyone have any recommendations or touring plans? Thank you!

Look under the Islands of Adventure touring plans category for part 2, or starting at IOA part 1.

Honestly, I would create a list of everything you want to do and just check it off as you complete it. Or use the app and sort by “super land” (bottom of each park page) and use that as a guide once the parks are open.

Ahh, thank you for that link!!

hahah I thought about doing it that way, but I wasn’t sure if the EPA and the express unlimited pass would allow me to do everything without having a plan in place. If it does, then I’m okay doing it that way.

Recently, this same topic came up. The person that travelled had never been to UOR before and got the Express Pass (UXP).

They felt “mislead” that they were told to not worry about having a plan at UOR. They thought they’d immediately get on everything with little to no wait. UXP allows you “faster” access. You’ll still wait about 33% of the post time. (sometimes 50%). They didn’t do all they wanted because they thoughted they’d get on each ride in less than 10 minutes.

I’d suggest going ahead and making a plan - not using UXP. See if you can fit everything you want to do within the constraints of not having UXP. Then when you have that worked out, you’ll know you’ll have “extra” time by using the UXP.

I’ve been going often this year. I still make a plan for each trip. However, I’m typically “ahead” of schedule around lunch time and then just make sure I “check off” all the stuff I planned that day.

I generally make a TP in advance, not using EXP, just to get an idea of what crowds might feel like. EXP isn’t going to help at gates, food stands, stores, etc anyway so I like to know how busy the park is going to feel in general.

Then when I get there I just use the wait times to drive my choices of where I’ll go with the EXP.

Thanks for that caveat! We’ve been to UOR before, but this will be the first time we’re doing both parks in one day AND the kids are tall enough to go on the rides so we will have more rides on the TP than we have before.

Would it sound right to do EPA at IOA - go on Hagrid’s first (maybe 2 times because I love it), Jurassic World VelociCoaster, HP and the Forbidden Journey then go to USF and do Despicable Me and Transformers and others in that park before we head back to IOA for the remaining rides since they take the unlimited express pass?

Would it sound right to do EPA at IOA - go on Hagrid’s first (maybe 2 times because I love it), Jurassic World VelociCoaster, HP and the Forbidden Journey then go to USF and do Despicable Me and Transformers and others in that park before we head back to IOA for the remaining rides since they take the unlimited express pass?

I highly doubt you’ll get two rides on Hagrid’s in EPA. I go solo and am, literally, the first person at the gates and run to Hagrid’s. I’ve never been able to get a second ride without already facing a 40 - 60 minute wait.

Other than that, the plan is fine. One exception is to do Despicable Me with UXP. The wait there, even at park opening is insane. It’s the first ride most ppl see and it’s an “all-ages” ride. Most people stop there, just to get their kids “on something” as they enter the park. It’s an “ok”" attraction, but not worth two rides anyway.

Transformers, rarely gets much of a queue. However, it is also in that “one & done” category. I’d suggest Mummy & Gringotts over either DM or Transformers - especially if your kids are big enough.

I agree with @darkmite2 and here’s an example of why you shouldn’t try to ride Hagrid’s twice at rope drop: 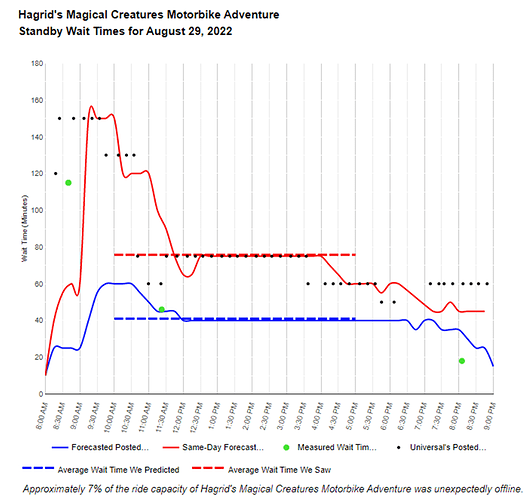 Yesterday on a medium crowd day (CL5), an actual submitted wait was 115 minutes at 8:40am! The highest waits of the entire day are 8:30-10:30. You should wait til late morning or after to ride a second time.

You should wait til late morning or after to ride a second time.

I, personally, like to get that extra ride in at closing time. Hop in the queue within 10 minutes before close and then it doesn’t matter what the wait is as the park is closed anyway!! Plus, riding it after sunset is a unique experience. There are no lights in the Forbidden Forrest - just the headlamp of the motorbike! Thrilling!!

like to get that extra ride in at closing time

That is always fun!!

I would also suggest you do your second Hagrids last, just because evening rides are really a good time. They’re fun on Velocicoaster too, but I’d pick Hagrid.

So, what I’m hearing is that I should ditch the kids on my run to Hagrid’s at rope drop… just kidding, thanks for letting me know. I’ll do Hagrid’s first and then try to do it later on during the day. If not, at least I would’ve gotten in once. I’ve actually never done Despicable Me and if Transformers isn’t really that much of a queue, then I might just skip DM, stay at IOA and use the UXP at Universal Studios later.

2 hours is pretty bad now, although I will admit, when Hagrid first came out in 2019, I was there and we waited a looooong time. If we had only waited 2 hrs I probably would’ve been thankful, hahah.

I’ve actually never done Despicable Me and if Transformers isn’t really that much of a queue, then I might just skip DM, stay at IOA and use the UXP at Universal Studios later.

This is what I would do! Stay at IOA until mid-morning / lunch and do everything at that park. Then hop over to USF. I’d really advise using the UXP on every attraction you come to as soon as possible. While you technically can do UOR in a day, it’s a long day. Plus, they aren’t often open past 7pm once school is back in session. Don’t “save” the UXP - go ahead and use them ASAP. You might think you’ll come back later, but there’s so much to see & do that you might not and you’ll have “wasted” the UXP by not using it!

I’m confused about why it’s even a question of whether they’d use UXP right off the bat for everything? There’s literally no reason not to use it if it’s available.

I think it’s just a matter of timing a select few rides that either don’t take it or get egregious early morning waits to avoid wasting time.

When is the trip? Is it in September or October, so you’d know for certain which park your early entry will be at?

It’s September, based on the website, IOA has the early entry.

Yes, I plan on using UXP for all of the rides I can, unless for some odd reason there is no standby waiting time and there’s a themed line I want to see like HP and the Escape/HP Forbidden Journey.

My main concern is which order I should go on - my thinking was to hit the non-UXP rides first, like JW and Hagrid during EPA.

My main concern is which order I should go on - my thinking was to hit the non-UXP rides first, like JW and Hagrid during EPA.

Totally understandable! Do Hagrid’s, VC and FJ all during EPA. Then you can go where you feel like. However, do make a tentative plan to make sure doing everything you want is feasible.

It makes me sad when ppl say, “I had UXP and it was still too busy!!”

I know, from experience, that you can do most of both parks in a single day even during busy times. I just came back a week ago when it was CL9 and I didn’t use UXP. I still did pretty much everything we wanted. We only stopped when my daughter got tired.

Okay, in September HHN is possibly going to play a role in your strategy, because it closes USF early and pushes people into IoA after 5. It may also mean Dark Arts at Hogwarts Castle, which is something no HP fan will want to miss… it hasn’t officially been announced yet, but it wasn’t announced last year until 11 days before it started on 9/18, and in 2019 it was announced on 9/5, for a 9/14 start.

Here’s what I would do, if I were you and I was focusing on rides:

Arrive at least 30 minutes prior to early entry star. Do Hagrids and then Velocicoaster right away, then head to Toon Lagoon (if you want to get wet… this is where I personally would save some time by skipping it altogether) and Marvel Island.

Walk to USF and make your way through the park… by now Minions and Transformers should be more reasonable, do RRR if anyone is big enough (or as a solo rider), then you can do Mummy, maybe Simpsons, and MiB before finishing in Diagon Alley by 4:15 or so. Pay attention to when it says Hogwarts Express closes.

Take Hogwarts Express to IoA, but go and do Jurassic Park, Kong, and maybe an evening ride on Velocicoaster before going back to finish your night in Hogsmeade.