As someone who has never been able to justify being an annual passholder, I don’t mind Disney not catering to them like they used to. Only time will tell if this strategy backfires on them when the good times inevitably end, though.

How do you think former Disney catered to passholders? I never felt catered to in the past, just limited in the present.

Maybe the wrong choice of words. But just the existence of the annual pass is of course a huge benefit to people that can go often enough to justify the cost of it (which used to be a lot more reasonable not all that long ago). I don’t blame passholders for being unhappy with the changes that have been made, though.

Oh ok. I wondered if there was something I was missing or blind to as a passholder. Full disclosure, I let my pass expire this year. The value proposition just isn’t there anymore and honestly I’ve felt disappointed after each trip I went on. I had fun, but it was such a diminished experience compared to the past that I couldn’t justify another year of sinking all my vacation funds into making WDW my primary vacation destination. Especially considering everything associated with the travel has increased in price too.

I’ve felt disappointed after each trip I went on

Even the one where you met a bunch of liners including Bird?!?!

had never enjoyed our touring experience as much as I did in our last visit a couple of weeks ago. Whatever they are doing, we like it and we like it a lot.

I kind of have to agree with you. We had one of our best trips ever, and we were well rested for once. We slept in and had no problem doing whatever we wanted thanks to Genie Plus and ILL$. I liked that the parks didn’t seem as crowded thanks to park reservations being needed. Contrast that to UOR, which was overly crowded as they have no limits.

That one excluded bc it wasn’t really a Disney trip since I didn’t go to any parks.

We had one of our best trips in years this summer, but it was due to BG1 (Thanks Joel!)and our TP knowledge/experience. My DD rode GOTG 6 times. The rest of us rode it 5X. It was like old school fast pass without the running. We decided ahead of time to stay at AOA and spend our money on rides,PH, and really good meals instead of a deluxe hotel.

Chapek actually addressed this (sort of) on the shareholder call by saying that when demand decreases they can open up the parks more to annual pass holders, that basically they have different levers they can pull because of the park reservations. I doubt they will need to pull the AP lever for awhile because international travel to the parks has not fully rebounded, so that should fill the void when revwnge travel slows.

But this leaves me wondering how much WDW is going to miss the non-FL resident AP holder. Those people who spend more money than locals but either can’t buy an AP or chose not to renew. They are harder to get back once they are lost.

We had one of our best trips ever, and we were well rested for once

We had a lovely time at Christmas amd went to the parks late. Everyone was happy to sleep in. I did think that my knowledge of G+ and drop times really made a differnece, so I have to add that caveat. With the Christmas decorations and the Epcot festival, I kept wondering what magic people felt was missing, because I felt it. My Facebook feed is full of people who had a great time at Disney this year.

I did feel the increased prices. Which leads me to this -

Ultimately Disney cannot do all of these at once

They can add rides and improve down time to help with crowding, but ultimatley that only goes so far. You return to this dilemma.

I guess it has just been a suprise that they chose to pull levers 2 and 3 at the same time in such an extreme way. But so far its working for them.

Why does everyone always dump on Chapek and not D’Amaro? Is it because Chapek looks more like a villain? Or is it more because of this:

[D’Amaro] keeps a high profile with fans and employees, making frequent appearances at the parks outside of major events and posting about his visits on social media.

By contrast, his predecessor, Bob Chapek, who is now Disney’s chief executive, walked the park grounds less frequently and wasn’t as outgoing with visitors, according to Disney employees who worked under him.

I mean, Josh is very dishy! That helps.

Seriously though, Josh started off his rise in ranks as being head of WDW parks. And he started promisingly, got CMs on his side by listening to them, went out and met lots of guests and so on. I think people had high hopes of him. It even seemed like he would stand up to Chapek if necessary.

And then he got the promotion. Call me a conspiracist if you like, but I think Chapek possibly realised the threat, both to his own position and also that he might be thwarted in some of his plans by leaving Josh where he was, so moved him further up where he had to come on board or risk getting thrown out altogether.

We had one of our best trips ever, and we were well rested for once

I also agree…maybe we are in the minority but no magic lost for me the parks. Even at CL 7s and 9s the larks are far easier to navigate now for me and I dont have to rush in the morning. I rope drop less and do more. I like genie +…it works for us. Our trips are more relaxed recently and I find myself planning more trips not less.

@Len was quoted in depth! Delighted WSJ figured out who in the Disneysphere really knows their stuff. Excerpt below:

“Disney has this love-hate relationship with annual passholders,” said Len Testa, a computer scientist who runs Touring Plans, a travel company that offers apps to help visitors find deals and navigate their trips to Walt Disney World and publishes a popular guide to Disney theme parks.

On one hand, they provide a reliable source of revenue—the investment bank UBS estimated early last year that annual passholders at Disneyland account for about one half of annual visits—but on the other, annual passholders tend to spend less than other visitors per visit, Mr. Testa said.

A typical annual pass holder might ride only one ride during a visit, eat an ice cream cone and walk around for a few hours, taking up capacity that might otherwise be used by out-of-state visitors, Mr. Testa said.

“Those people would have stayed all day,” he said. “They would have eaten multiple times in the restaurants, they may have stayed in the hotel. They would definitely be buying more merchandise.”

Article also mentioned TP did an analysis for the WSJ showing wdw costs have gone up faster than inflation over the last decade.

I have been reading Twitter posts regarding this. I must admit that I am increasingly bothered that so many seem to be willing to completely ignore/excuse what Josh has been saying.

Leadership is standing up against things you don’t believe in. It seems like many would like to believe Josh is being “forced” to say these things.

It is his choice. Leaders make those choices every day.

But this leaves me wondering how much WDW is going to miss the non-FL resident AP holder. Those people who spend more money than locals but either can’t buy an AP or chose not to renew.

This has always been the thing that irks me… if, as a business, on-site guests who stay multiple days in a row are the biggest contributors of value, I’m baffled they don’t do more to draw repeat out of town guests. I know they have the “bounce back” or whatever room discount deal if you come back. But it’s not that much and you don’t get discounts on park passes… I just don’t understand why they don’t have a “frequent flyer” program. Whether just for hotels or for park admissions or both. They might get me a lot more often if they did something like that.

How much is the bounce-back discount?

I’ve never heard of this ‘bounce back’ thing either. I do remember being hit up in emails to schedule my next trip while I was still on a trip… is that what this is about I wonder?

Oh, I got my first thank you email from Disney… my first one in years. 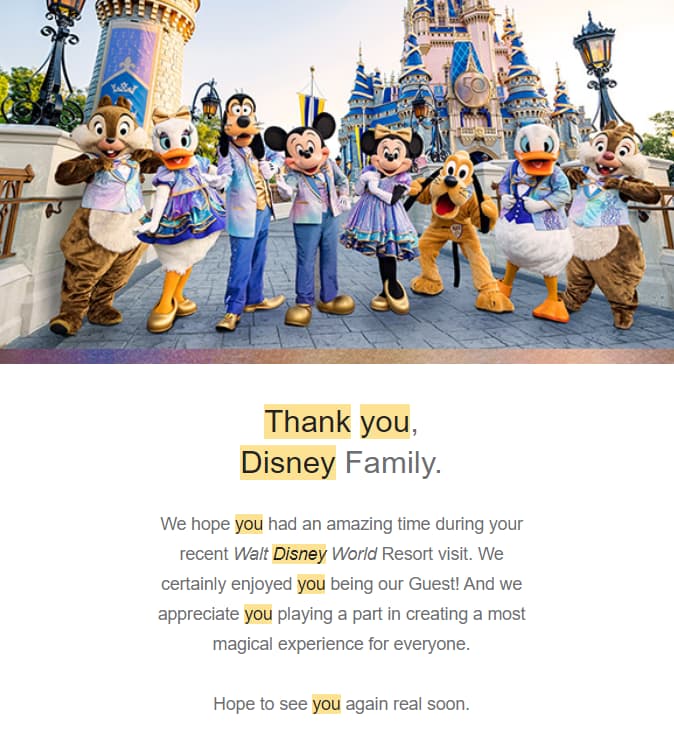 Repeat customers are not the target audience right now. It is short sighted and may have a long-term impact on the company but the focus is those “once in a lifetime” visitors. The expectation is those families will spend more during that trip.

the focus is those “once in a lifetime” visitors

The long-term problem with this strategy is that most people have only one lifetime.