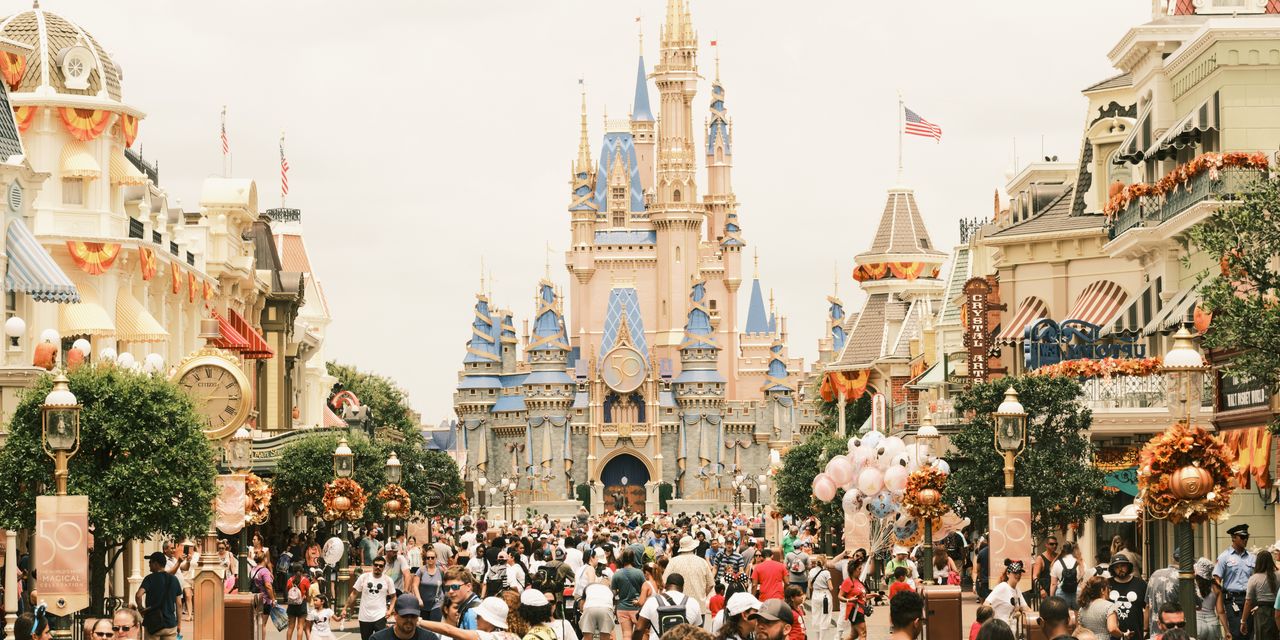 Attendance remains below prepandemic levels, but Disneyland and Disney World are making more money than ever. The company has raised some prices and eliminated or started charging for other services and features that used to be free.

“Disney has this love-hate relationship with annual passholders,” said Len Testa, a computer scientist who runs Touring Plans, a travel company that offers apps to help visitors find deals and navigate their trips to Walt Disney World and publishes a popular guide to Disney theme parks.

This has clearly been their short game for some time. To the exclusion of considering how it will affect their long game. Because it’s working for right now and that’s all that cheapek cares about

Josh D’Amaro, the chairman of Disney’s parks, experiences and products division, said that the changes have given visitors more choice about how to spend their time and money at the parks, while at the same time making the parks “extremely commercially successful.”
…
Mr. D’Amaro said he’s aware of the tension caused by rising prices and other changes, especially for annual passholders, but describes it as the inevitable result of progress, and insists that every change Disney has implemented at the parks is in service of improving visitors’ trips.

Why does everyone always dump on Chapek and not D’Amaro? Is it because Chapek looks more like a villain? Or is it more because of this:

[D’Amaro] keeps a high profile with fans and employees, making frequent appearances at the parks outside of major events and posting about his visits on social media.

By contrast, his predecessor, Bob Chapek, who is now Disney’s chief executive, walked the park grounds less frequently and wasn’t as outgoing with visitors, according to Disney employees who worked under him.

D’Amaro does a better job at the wolf in sheeps clothing thing. And Chapek is the CEO so while D’Amaro should be held accountable, the one doing that should be Chapek (I hate that my phone knows his name). And since Chapek seems to support his actions, we go to the head.

Josh D’Amaro, the chairman of Disney’s parks, experiences and products division, said that the changes have given visitors more choice about how to spend their time and money at the parks, while at the same time making the parks “extremely commercially successful.”
…
Mr. D’Amaro said he’s aware of the tension caused by rising prices and other changes, especially for annual passholders, but describes it as the inevitable result of progress, and insists that every change Disney has implemented at the parks is in service of improving visitors’ trips.

Wow, does he believe this?

If you drink the koolaid long enough you begin to believe the crap you’re spewing, yes.

To speculate about the answer to my own question, did Chapek set in motion many of the most-despised changes while he was in charge of parks? (Speculation because I’m not familiar enough with the various timelines to know.)

Rationalization is a powerful drug.

I just keep biding my time to watch how quickly they pivot their beloved new business model when the economy inevitably takes a downturn. Loyalty will suddenly become something they covet again.

Never have a I ever felt more like cattle than this lovely excerpt.

“If I’m seeing too much activity on the west side, I’m able to spread where I direct people to the east side,” Mr. D’Amaro said. “Our attractions will be load-balanced better, and lines will be shorter, and what that means is the experience will be better.”

What I want to do is not important to him, only that he try to keep slinky dog to a comfortable 120 minute wait while he directs me to two or three dining options away from the ride.

What I want to do is not important to him, only that he try to keep slinky dog to a comfortable 120 minute wait while he directs me to two or three dining options away from the ride.

Unless he is physically in the park and physically moving me to another thing, I don’t see how just suggesting options does anything. I’m going to do the thing I want to do - if I really want to do an attraction, I’ll wait in a line for it and not be “redirected to food”.

As unpopular this sounds, I can’t help but think Chapek and D’Amaro are right. We aren’t seeing what the parks would look like without some of the measures they have taken. I think APRs are, in fact, a benefit to guests, as an example. And what if they start allowing APs again too soon? Parks would either be even MORE crowded, or AP guests would not be able to get in much as what happened at Disneyland, etc.

(I can’t even believe I am saying that.)

I’ll confess that in the 35 years I’ve been going to the parks, first as a boy and now with my own kids, I had never enjoyed our touring experience as much as I did in our last visit a couple of weeks ago. Whatever they are doing, we like it and we like it a lot. We didn’t rope drop a single time and we just had to do a couple of attractions on stand-by and we rode everything we wanted just with smart G+ and ILL purchases.

I really hope people start seeing the benefits because I do believe the visit experience is better than before. Chapek is not a stranger to Disney parks, all those things everyone loved so much were also his doing so maybe, just maybe change is not that bad.

You (and the rest of us here) aren’t most people, though. We’ve got extra tools and additionsl, deeper knowledge that enable us to feel confident making those choices for ourselves.

The average park-goer has maybe read a blog or two but really is just trusting the Genie app, and they should. It’s going to give advice that’s better than no strategy at all because it does still have a goal of increasing guest satisfaction. For all its doing to make the company money, it’s also making the average park goer feel like they’re making the most of their day, which in turn tends to make the company money because satisfied people spend more.

I have to say that I agree with Ryan that there is something to their strategy that’s working. The crowds and lines at WDW have been consistently less than Universal all summer, and I think that’s a plus for guest experience… that’s likely due to limiting AP sales and APRs. Everyone I know that’s used G+ has been satisfied with it, and a couple of them felt it was an improvement over FPP. Over and over people are returning from trips saying “That was a really great trip!”

I definitely liked Genie+. I never felt like there was something I wanted to do that I didn’t get to - if LLs were gone for something I wanted (which was literally only Monday at Epcot when FEA was gone before I could make another) I either could have waited in line at a down time or (what I did) booked that for my first LL my second day in Epcot.

Checking my December trip…3 days at Epcot…and just one evening, after dinner, for AK.

I had 3 starts at Epcot - one stayed all day, one hopped to MK, and one hopped to AK - and 2 starts at AK where I stayed the whole day (well, the second until after the rhino tour because I had to come home that day).

I guess technically Tuesday when it was MNSSHP I started in MK…but only for the party.