Would you give up a daytime meal at Sanaa to do Cali Grill Brunch?

At 130 days to go, I’m spending all my time engaged in the very valuable activity of second-guessing my ADRs

I’m going with my dear mother late Nov/early Dec for a girls trip. The overall hope for the trip is a relaxed/indulgent sort of vibe, as in the past we’ve always done short commando-touring-style trips and we wanted to change it up for this longer trip.

Given that, what would you do? We have two animal kingdom days, one a RD-to-mid-afternoon, and the the other a late-start-to-close. My plan for our had been to do the Wild Africa Trek as a small ‘lunch’ plus an early Yak & Yeti dinner on the early day, and then do a Sanaa lunch and a QS dinner on the late-start day. The late-start day is a Sunday, though, and I’ve read nothing but great reviews of the Cali Grill brunch and I’m starting to get tempted.

In order to add the brunch, though, we would have to shift the Sanaa meal to dinner, likely on the first day (so Wild Africa Trek ‘lunch’ + Sanaa dinner, then Cali Grill Brunch + Yak & Yeti dinner). However, even the earliest dinner seating at Sanaa is only like 30 min prior to sunset that late in the year, and I’d be sad to give up the animal views. I can’t drop the meal at Yak & Yeti as it was one of mom’s very few specific requests for this trip.

What does everyone think? Would you swap a daylight meal at Sanaa for a sunset one in order to do the Cali Grill brunch?

I felt so full after my WAT lunch that I cancelled my dinner at Tiffins for later that night. It’s not a snack. (I did the 2.30pm WAT and, admittedly, my Tiffins reservation was quite early, about 6.30pm I think. But the WAT lunch kept me going till about 9.30pm, when I had dinner at Satu’li.)

I had booked the CG brunch but cancelled it because I couldn’t make it fit with my schedule so I can’t speak to that. @OBNurseNH thought I was insane. She raves about it. But then she does like the sauce, so it might just be the unlimited mimosas.

I had dinner at Sanaa last year and timed it so that we arrived maybe an hour prior to sunset. We got an amazing table and stunning views of the animals. 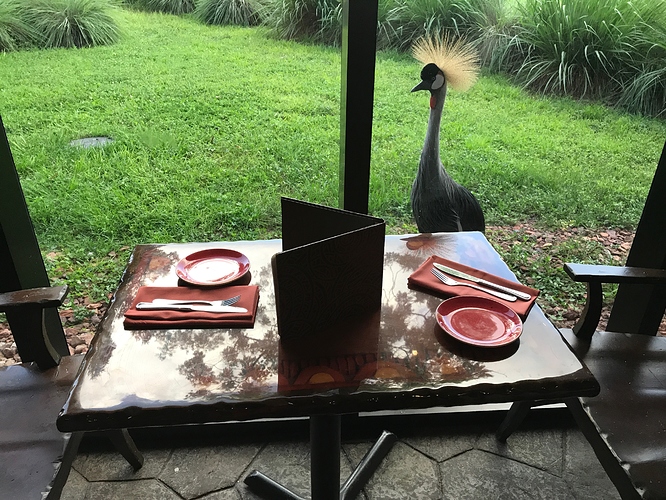 I’ve never eaten at Yak and Yeti, so have nothing to offer there.

Except to say that I think you should do (in no recommended order): CG brunch, early WAT, Sanaa early dinner or lunch, Satu’li dinner (less busy, plus Pandora is better at night).

You’ll have to explain to your mother that Y&Y brings nothing to the table and just doesn’t work in the schedule. She’ll be bitter and angry until she’s sitting opposite a zebra while she’s eating her dinner. She’ll be so liquored up at the CG brunch that she won’t care that she’s angry. And Satu’li is universally agreed to be the best QS on property — and I mean all four parks.

But the WAT lunch kept me going till about 9.30pm, when I had dinner at Satu’li.

That is very good to know. We’re doing the 12:30 Wild Africa Trek, so we’ll be eating a bit earlier that you did, but it’s still good to know that it’s a good-sized lunch. Mom and I are both light eaters – at Sanaa, for example, we always just split the bread service between us, get a couple of drinks, and that’s enough for a meal without anything else. I may have to re-think if we’re not going to be hungry until later that night – I was planning on a early dinner at around 4:30/5 that day. If we’re not going to be hungry that won’t work. Ugh! @profmatt you’re supposed to be making my choices easier, not harder

I had booked the CG brunch but cancelled it because I couldn’t make it fit with my schedule so I can’t speak to that.

You mean you changed your mind after booking something? I categorically refuse to believe that–it seems so out of character . . .

That picture from Sanaa is amazing, btw.

You’re going to be too stuffed to have an

Yes, but YMMV. We were lucky, I think.

We absolutely loved Sanaa so I wouldn’t give it up. Since your mom requested Yak &Yeti and you said that you are not big eaters, I would leave your reservations as they are. California Grill brunch sounds lovely but I like the plan you have now.

I would leave your reservations as they are. California Grill brunch sounds lovely but I like the plan you have now.

There is wisdom here.

Abandoning the CG brunch became necessary because it was just too complicated to keep it in. It’s a faff to get to, it didn’t fit in with the other things I wanted to do that day, and I’m really not that into alcohol, and certainly not during daylight hours. Sure, the view’s nice and the food looked OK, but it’s $80. It just became a nightmare and I ditched it. No regrets.

This is the other thing that’s making me torn about the brunch – $80 is a lot of money for brunch (even a fabulous brunch). I mean, mom & I would both get our money’s worth in mimosas, I have no doubt, but I’m not sure I want to drink a bunch of mimosas at 11am and then have a whole day of touring to do? Especially at AK, which always seems to be hotter than the other parks, somehow.

Although both the brunch and no-brunch plans involved an early dinner after the WAT, so if that’s not going to work I may have to rethink overall.

And we love Sanaa as well @paulasc – it’s our one “must-do” meal on every trip. Even the fact that I managed to dump my entire water glass directly into my lap before dinner couldn’t spoil the experience last time!

I love CG Brunch. The mimosas are just a small reason why. The butter poached lobster eggs Benedict is another. The sushi is a third. The Bloody Mary bar is very fantastic.

As to the sauce, I love a good sauce or three on vacation. Daily. Only the good stuff.

The sushi is a third. The Bloody Mary bar is very fantastic.

Neither of us likes Bloody Marys, and mom won’t touch sushi (though I enjoy it). Given that, would you still recommend it? Every review I’ve seen raves about the atmosphere as well as the food – is it as relaxed a meal as it seems? I think I’ve just fallen in love with the picture of myself relaxing at the top of the contemporary, mimosa in hand, enjoying the views of MK in the sunshine – not sure that by itself is “worth” the price.

Every review I’ve seen raves about the atmosphere as well as the food – is it as relaxed a meal as it seems?

I’m going to go find my review and share it here. Hang on

the picture of myself relaxing at the top of the contemporary, mimosa in hand, enjoying the views of MK in the sunshine

Followed by a splitting headache for the rest of the day and long lie-down in your hotel room to sleep it off.

Followed by a splitting headache for the rest of the day and long lie-down in your hotel room to sleep it off.

If she’s a lightweight! 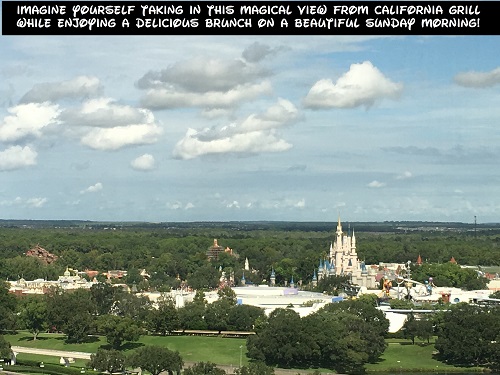 I’ll agree that if Yak & Yeti was requested that you should forego CG brunch. It’s a massive amount of food. We’ve gone twice and we don’t eat for the rest of the day.
The bloody Mary’s are an additional charge above the $80 brunch cost, so that’s another reason…

True. Unless you have Tables in Wonderland… 20% discount. That effectively covers tax and tip (they automatically add 18% tip when you use the card).

Thanks so much for linking your review @OBNurseNH. This thread had almost convinced me to give up on the brunch idea and now your review has me even more conflicted than before! Hmmmm. . . might have to be something for the next trip, though.

I now feel as CG must be on my bucket list…

Can I come along and make sure you make sufficient good use of this Bloody Mary bar so you get your $80 worth?

The bloody Mary’s are an additional charge