These are the ones I have so far. Thanks in advance for your help and advice!

Could you tell me how to do that? Thank you

When you go into your plan “click edit” then there should be a box “publish this plan” …that should do it!

Select ‘edit’ the check the ‘publish this plan’ box. 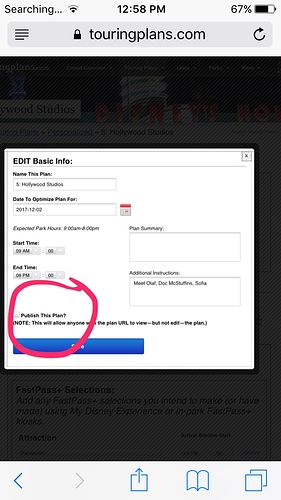 I published them. Thanks for all your help

I think maybe the URL changes once you publish? I’m still not able to view them.

You need to post new links after publishing the plans, the old links won’t work. Then we can help you. Thanks.

Once you’ve published it, on the actual plan it gives you the public URL - 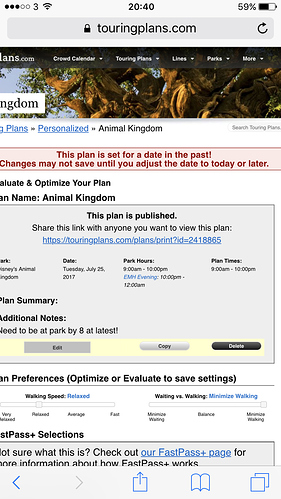 Thank you for the help!!

If you are going to RD FOP I would build in a break there since the wait time probably isn’t accurate.

AK first. I assume these are an either / or option? Even at rope drop, unless you happen to be at the front, the wait for FOP could be quite long. Being at the front would mean being at AK around 75 minutes early.

Wilderness Explorers has activities all over the park, just so you realise that. I would pick up the booklet asap after Pandora, to do as you go.

You have no break at all in plan 2 and in plan 1 you are going from presumably pre rope drop to well after 1pm I think with no break. Are you just planning to eat on the go? It will still be fairly hot in September, you might need to sit down and rest somewhere for a short while.

Plan 1 has a long down time. Is that an out of park break? You can add a break to your plans and mark it as out of park.

Both plans have a lot of back tracking, which is fine depending on your family. 2 adults would manage, but there’s a lot to look at at AK and personally I would feel I had no time to take it all in. And it’s a lot of walking, AK is bigger than many people realise.

Plan 1 would give you lots of time to try to rearrange the day so you can minimise back tracking, maybe include a play time at the Boneyard etc. if you have kids. Or just allow extra time for things like the treks. I find I take a good 40 minutes for both the gorillas and tiger areas.

DHS - again I didn’t see a break at all, not even for lunch.

I know scheduling shows can be difficult, but March of the First Order really runs into A Galaxy far far away. It would make more sense to watch the show after the March imo.

Are you planning to just watch Jedi Training? If you have kids who want to take part, you will have to return about 20 to 30 minutes before the show.

So to summarise on those 2 parks. I would look at breaks, even to sit down and eat for 30 minutes sometime for an earlyish lunch if you plan to be early for rope drop, unless you are just going to grab and eat on the go.

And it would probably help to tell us a little bit about your group, so we can advise better. My view is for adults the plans are do-able, but if there are kids they seem a bit rushed. As you have the extra days I would look at cutting the plans down and plan an extra part day at least at AK.