I’m conflicted on this one. At one extreme, it seems exorbitant and excessive. Plus, where would i keep it? Am I going to have to carry it around all day? Will it break in the case on the way home?

On the flip side, the experience sounds like an awesome way to regress to teenage years again, and I have this inkling that I would be the kid in the figurative sweet shop… 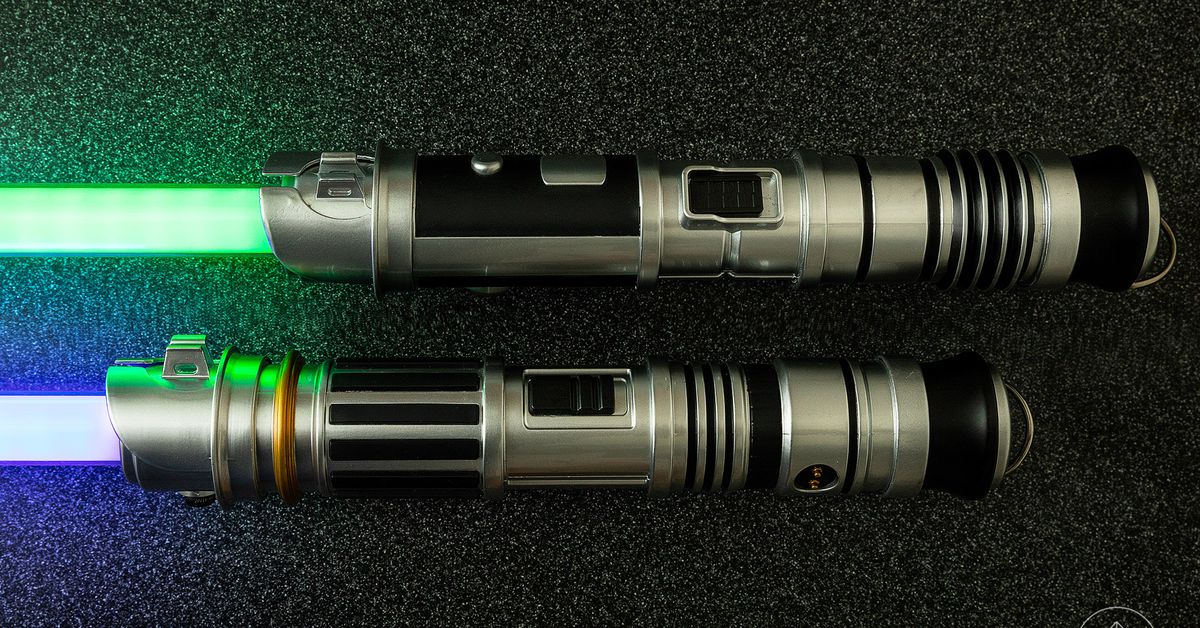 Building a custom lightsaber at Star Wars Land blends a drug deal with a...

What do you think? Will you give in to the Dark Side…?

We will not be buying anything like this. Bad enough to admit my husband allowed the kids to buy a banshee. No idea where that expensive souvenir is now.

I’m 50/50 on it right now. I REALLY want one, but I also want to build a droid and a salacious crumb pet. Doubt my better half will appreciate THAT credit card bill. I’ll probably settle on a droid…

And maybe a light saber…

Will you give in to the Dark Side…?

Nope. Absolutely not. No way, no how. I have a hard enough time justifying the price of a Disney T shirt or hat. But those I can actually use. A lightsaber? Just something for me to find a place to store away for years only to eventually throw out or donate or something.

Will DH? Probably. He’ll probably go for a droid first, depending how big they are of course!

Someone somewhere posted something about only one person allowed to accompany the purchaser. That is c**p IMO. I mean it means you have to decide before you buy. Plus kids can’t go have fun together unless they get one each. Maybe it’s just for the opening weeks?

I want one, so bad. But $200, not going happen. Plus if I get one, everyone will want one. And for what, to sit on a shelf somewhere. We decided to build droid for my DD5. It’s her vacation anyhow. Rather get cheap plastic lightsaber so I can actual play with it.

Nope. That price tag is just outrageous. (I’m usually a Disney apologist / defender when ppl exclaim - “Going to Disney is too expensive”. However I just can’t do so with this one.)

I did pay for an interactive wand at Universal. However, for $60 I got a similar show at Olivanders (which anyone can do for FREE) and my wand actually does stuff around the park which gave me even more hours of entertainment.

Does the lightsaber interact in anyway or is it just a souvenir?

I saw the YouTube videos from both TP & WDW News and that’s enough for me.

I disagree that the price is too high, in fact, I’d almost argue it’s a bargain. I’ve mentioned this before, but Master Replicas lightsabers forceFx were north of $100 even before MR lost their SW license (these are the ones you can currently get in SW Launch Bay, and you’ll notice their price went up)

But the ForceFX sabers, even with their current price point don’t have

So, if you match the cost of the saber to the existing ones without customization, you’re paying roughly $50-$75 for a show and features. Sounds about right for Disney, doesn’t it (coughDessertPartycough).

Now, that said, I’m on the fence. Like @ryan1 mentioned, I fully realize this has absolutely zero practical use. It’d be created, worn on my belt as I walk through the parks (like the dork that I am), and once I get home…it’ll sit in a box or on a shelf collecting dust. That’s a lotta cash to just sit there, but then… how much money has been spent on Parties where you get zero from there except a few nice memories?

The bigger issue I have is the size of these things. The pictures are all over the place. Some look like you’re holding a Pringles-sized can(no matter your configuration), others looks perfectly normal (which should be about 1” or so in diameter). Even the link you provided is confusing (the photo at the top looks fine, but the video at the bottom makes everyone looking like they’re holding the aforementioned Pringles can). Yes, for something that’ll sit on a shelf, that shouldn’t matter, but it does.

I wanna do the experience more than keep the saber, but the idea of having a custom saber is definitely appealing.

Side note: watching that video, holy crap, the guy is 100% synced with the music. ‘Scuse me, I got some crap in my eye…talk amongst yourselves

Side note: watching that video, holy crap, the guy is 100% synced with the music. ‘Scuse me, I got some crap in my eye…talk amongst yourselves

Can you point me to where in the video you are seeing this?

2:30 when he holds up the lightsaber. The music goes into the Binary Suns music (force theme) and continues from there.

Ah. I HAD seen it but the volume was down low and it is very subtle so I missed it.

I have to say - and I can’t say it loudly enough - I AM NOT A STAR WARS FAN. But dang if I didn’t get a little star dust in my eyes at the end of this ceremony. I can’t imagine what it would mean to someone who loves the franchise. Everything I have seen so far about this land has just blown me away. And I even want to see it, eventually!

it is very subtle

It is, which is what made it perfect.

@Randall1028 - If you are an adult Star Wars fan who has always wanted a light saber, then maybe this is a bargain. You probably have disposable income to splurge on an awesome souvenir.

If you’re a dad, like myself, and you have kids - especially multiple kids - and they all see them in the park it’s a tough conversation to say “we can’t afford this.” Also, you can’t just buy one and expect them to share it. Heck… they can’t even see the show unless you pay for the toy.

At least at Universal the show isn’t behind a paywall. That’s what kinda bothers me about this too.

They still have them at Star Tours I think, for a lot less. More like $30 each!

Fair, but was a $100+ souvenir ever on the table in that scenario? Cause even solo, it’s not for me 99% of the time (and why I stopped buying the ForceFX lightsabers. It was essentially a waste of money). If it wasn’t for the experience that goes along with this, I’d likely give it an envying glance, but then move on. Additionally, where are your thoughts when it comes to a dessert party or a character meal?

I’m just saying for what you get for the $200, I see the value. Whether it be a solo or multiple people. I’m certainly not saying “everyone should get this” just that it’s not “outrageous”.

but it’s not the saaaame!

“Stop whining, or we go back to the resort,”

easy. tell them to get a job