Which park would you choose?

Going mid-May with 4 days in park. Here’s the crowd calendar for those days. I was trying to leave EP for Monday in hopes that they will add EMH for that evening for deluxe resorts. Tuesday we are leaving in the evening so was trying to leave the easiest park for that day - hence AK. From this calendar it’s a toss up for MK & HS either Saturday or Sunday?
My original thought was MK on Saturday because the hours were longer (they’ve since changed to shorter hours). Which is better on Saturdays - MK or HS?
This is our first DW trip but first longer one with our 4 year old. We’ll be doing rope drop, back to the room for 2-3 hours and then back til close. 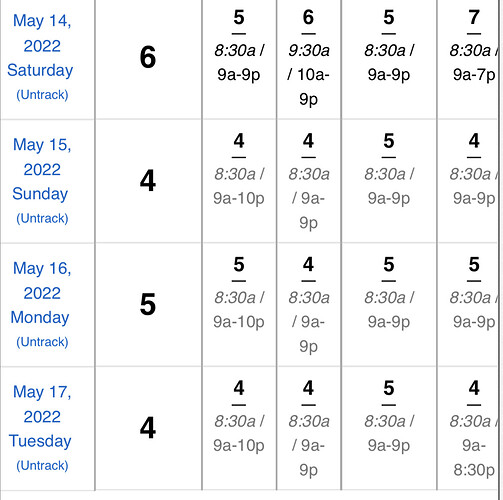 We are going the same week.

MK closes at 4:30pm on Sunday. I heard it will be more crowded the other days because of this. Since we have two days planned for MK we ware going for Sunday and hope for lighter crowds that day.

Ugh! What in the world?! Are they closing earlier because they expect low crowds? What are doing Saturday? HS? Also, any other recommendations of places to follow info on crowds, etc?

May 15, 2022 is the night they are hosting the annual Cast Member celebration at Magic Kingdom. It’s a party for CMs with milestone anniversaries. (10 years, 15 years & etc… )

We’re going around the same time, but I am taking the crowd calendars as not quite accurate right now. They have been updating all the crowd levels 30-45 days out because of the huge crowds recently. I’m waiting to see what they look like after April updates.

Saturday will most likely be crowded at MK but with shorter park hours on Sunday and your mid day break, you will get far fewer hours at MK on Sunday. HS will also probably be crowded on Sunday bc of the short hours at MK on Sunday. That all being said, with a 4 yr you will probably be skipping the rides with height requirements and the things that are less popular with toddlers (Presidents & CoP) so you may be able to accomplish a lot on Sunday at MK. Just depends on what you want to do at MK. Also with a lot of people hitting up MK on Saturday bc of Sunday low hours, HS may be slightly less crowded on Saturday. It’s a toss up, lower crowds but only a half day at MK vs evening hours at MK and higher crowds for both parks.
Just my opinion though. Crowds are so hard to predict nowadays.

They really are hard to predict! We have 3 boys - 15, 12 & 4. So will definitely be trying to hit the big stuff too. I’m going to play with some touring plans and we may just go to MK Sunday with no break and hang out that night at the resort. Lots to consider.

I know I’ve always heard MK is busiest Saturday - but I feel like HS is too. However with flower & garden AND short MK hours Sunday, Saturday may be the day to hit HS and just go, go, go Sunday. My 4 year old doesn’t nap, we were just going to rest. So he could def be fine for a long day and then rest that night.

Definitely. Have our reservations set but will probably be changing as we get through March. It seems the last week TP has been pretty good since they updated their calendar.

They release the evening hours calendar and Monday is Epcot and Tuesday is MK vs the usual Wednesday.

Something else to consider, skipping Epcot extra evening hours and make Monday an MK day, doing Epcot on Sunday, HS on Saturday. I think HS will be slightly less busy on Saturday just bc of short hours on MK Sunday, everyone will want to get a full day of MK Saturday.

Very true and good idea. I guess I was just looking forward to taking advantage of the EMH with low crowds. It’s a trade off either way I guess.

I’m going this same weekend. Hs on Saturday and MK on Sunday (park hopping to EP on Sunday evening).

Good idea. We didn’t purchase hoppers this time. I wouldn’t mind an evening at Yacht club pool area. Trying to figure out if we can squeeze everything in at MK on Sunday.

They release the evening hours calendar and Monday is Epcot and Tuesday is MK vs the usual Wednesday.

That means that you should extend your trip so that you can take advantage of the Tuesday night EM MK hours!