Hi,
Only my second post so please be gentle!

I’ve been concentrating on putting together our touring plans based on rides for our 2 week stay in August 15 but having had some super suggestions from a couple of liners after asking about another subject I relaide my knowledge on eating with characters & best places to eat if minimal!

I am taking 4 boys - our 5 & 7 year old and their cousins who are 10 & 14… So we’d be interested in Star Wars, dinosaurs, Pirates, and although not at Disney anything Marvel.

I know that our 180 days are in few and any pointers or favourites would be must appreciated. At the mo I have T-Rex, stars wars lunch? And although very mixed reviews I fancied the restaurant with the coral reef… Had hoped to take them to the nascar place at uni but I think it’s closed?

Thanks all,
Helen (Disney Virgin)

There are probably a zillion sites out there but it might be easiest to start here to see all of the character dining experiences:
https://disneyworld.disney.go.com/dining/#/character-dining/

And you can always then search here for oodles of info about specific restaurants!

We are taking our kids for the first time next month and have reservations for breakfast at Chef Mickeys (in the Contemporary) and lunch another day at Hollywood and Vine (Disney Jr. characters at Hollywood Studios).

There are also countless themed restaurants that will make dining fun even without the characters! We also have reservations for dinner at Ohana (Polynesian) as well as Whispering Canyon (Wilderness Lodge). My kids are 2 and 4 so probably have much different interests than your boys!

The TouringPlans Blog, of course! Check out http://blog.touringplans.com/2014/06/15/disney-world-character-meal/

Thanks v much… I should probably mention that we don’t get any Disney channels and the boys haven’t really watched that many movies… They love Pixar and have seen Peter pan & frozen.

I’m liking the sound of eating at some of the Disney hotels. I take it we can do that even if we’re staying off site?

Thanks for this, don’t think there are really any characters on that list we would be interested in seeing… Maybe Star Wars breakfast is the way to go…

Thanks for the link to the Disney site any ideas why it talks shout this date range? Ask as we’re going August

“From May 4 through June 14, 2015, celebrate your love for the Star Wars universe with an unforgettable Character Dining experience at the Sci-Fi Dine-in Theater Restaurant—alongside several familiar faces from the greatest saga ever told”

Probably - Character meals tend to skew towards princesses, so it that is not your thing then they probably aren’t a good value. That being said, there was an interesting Blog post about taking boys to CRT http://blog.touringplans.com/2014/12/29/menu-monday-boys-castle/ - the bottom line was that the writer’s boys loved it!

Yes, you can dine at the resorts too - I’m just not sure how reservations work if you are staying off-site.
There are certain Star Wars events that I believe only run in May and June - so those meals you are seeing are probably just during that time.

I suspect you already know about the Star Tours attraction in Disney’s Hollywood Studios. Plan to visit that a couple of times, because the place you visit can be different each time you ride and because there is a lot to see in the queue while you’re waiting to ride. Also, see if your kids want to participate in the Jedi Training Academy (and plan to sign up right at rope drop if they do):
https://disneyworld.disney.go.com/entertainment/hollywood-studios/star-wars-jedi-training-academy/

There are a lot of pirate-related activities, including seeing Captain Hook in the Peter Pan ride (see at rope drop or get FPP, since this gets crowded) and, of course, Pirates of the Caribbean. Also consider the Captain Jack Sparrow’s Pirate Tutorial (near the Pirates of the Caribbean ride):
https://disneyworld.disney.go.com/entertainment/magic-kingdom/captain-jack-sparrow-pirate-tutorial/

Your children can also sail off on their own Pirate Adventure Cruises (for $37 each): 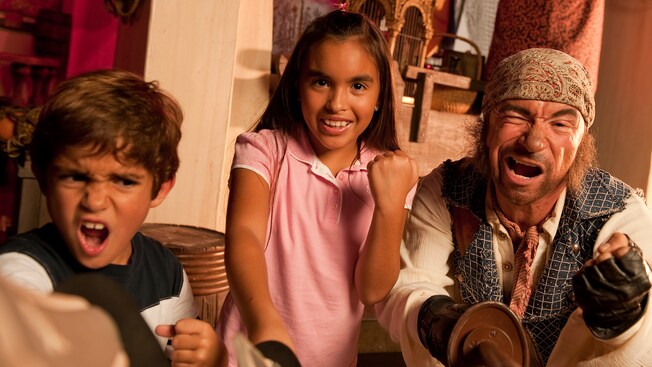 Add even more magic to your visit with this unique experience at Walt Disney World.

or, if you want to join them at see, then there is the evening Pirates & Pals Cruise ($34 for children, $59 for adults):

Grab yer mateys to feast on tasty treats—and then embark on a cruise of Seven Seas Lagoon. During your voyage, you may encounter some fearsome pirates and behold a spectacular fireworks finale!

Dinosaurs and prominent in DinoLand in Animal Kingdom, particularly on the Dinosaur ride (though many children fight that frightening and many adults don’t enjoy being jerked around in the ride vehicles). In Epcot, the Universe of Energy attraction travels past Dinosaurs for part of the ride (though there’s a lot of non-Dinosaur stuff that may not be as entertaining for kids and the entire experience, including the preshow, is around 45 minutes).

You also mentioned T-REX. I wasn’t a fan when I visited (with my friend’s family and his 5 and 7 year old boys). It was the loudest dining experience I’ve ever had, though the 5 year old somehow managed to fall asleep during the long delay before his food arrived and after waiting more than an hour to be seated. You can, however, avoid our first mistake by making sure you are seated faster with a Landry’s Select Club card. In the past, this club cost $25 to join, but you would receive a $25 gift certificate for your first meal. So, if you join ahead of time and aren’t using the Disney Dining Plan, then your membership is effectively free. You then get the benefit of (often significantly) shorter waits at Landry’s restaurants around the country. You can look at their website for details: http://www.landrysselect.com/

I believe that the Star Wars breakfast only occur during Star Wars Weekends, which is a limited-time event at Disney’s Hollywood Studios in the spring. Unfortunately, you’ll be missing the opportunity to have that character meal. Sorry to be the bearer of bad news.

Oh no really? What a blow! We can only go in uk school holidays

I can relate, my Mom was a teacher, she could only do school breaks too.

Definitely check out Star Tours and the Jedi Training Academy, though. I think those would please any Star Wars fan!

You can eat at any restaurant you wish. You do not have to be staying at that hotel to eat there.

Unfortunately, as others have said, not much boy oriented choice.

For a character meal, maybe chef Mickey, since I assume they would know Mickey, Minnie, goofy, Donald duck and Pluto.

Whispering canyon cafe in wilderness lodge is a lot of fun, and I think the boys would have a blast there. It is not, however, a character meal.

Thanks Agent C, I think theming & experiences is the way to go… Looks like wilderness has a lot to offer as they do the campfire thing as well. My eldest son (7) loves a guy called Steve Backshall and he’s a wildlife/adventure presenter so anything camping explorering Safari like will be very well received.