Where in EPCOT was this photo taken?

My kids in the early 1990’s I am thinking, it was in Epcot but what pavillion? Thanks 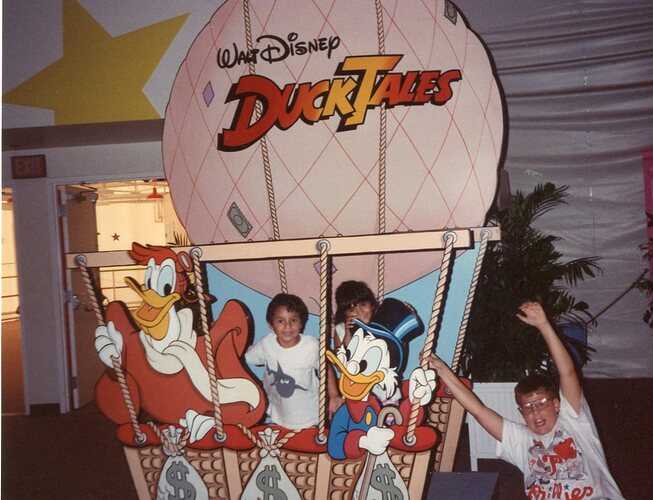 Here’s another one I found. 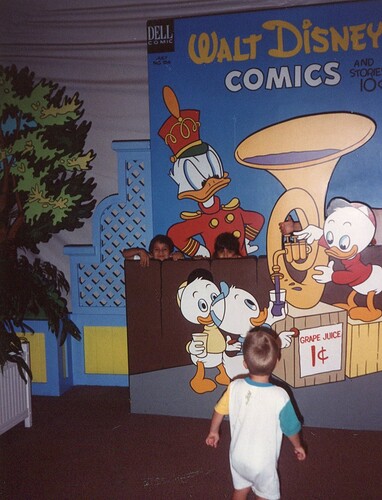 I don’t know…but the first two ideas that come to mind is maybe as you exit the theater in the Land. The floor in the background with railings make me think it is a second floor. Not sure, though, since the spacing seems too big to actually protect against a fall, so maybe it only looks like a second floor.

The second though is the pavilion where they host some festival food and activities near the UK pavilion.

The walls seem like they are just covered in something temporary, so it isn’t necessarily a permanently decorated area, which again makes me think it could be that pavilion near UK. But the background looks off for that.

Epcot.wouldn’t have Disney IP in the 90’s, would it?

If you look closely at the background, it looks like a tent. Could it have been in the Toontown Fair at MK?

Epcot.wouldn’t have Disney IP in the 90’s, would it?

Sorry, but it did. For instance, January 1995 was the debut of Circle of Life:: An Environmental Fable which was a movie in the Land pavilion, featuring Lion King characters. Goofy About Health was a film in Wonders of Life pavilion during the 90’s.

My oldest son said last night he thinks it was in the Wonders of Life pavilion , was it partially shut down then? I don’t think we would have went in there if there were no rides. I have so many pictures from the 80/90’s that. I have no idea where in the park they were!

Could be. It was on my mind, but it has been far too long for me to remember what it looked like inside. But WOL was open through 2007. It went to seasonal operation only in 2004. But since it didn’t open until 1989, I am sure it was fully operational for your visit in the 1990s.

Do the photos have a number on the back or do you have the negatives to try and establish sequencing? If you know which photos were taken before and after it might give you a clue about these.

No negatives these were scanned from the original years ago and the originals are in bad shape. Even the scans were bad back then. Tried to Photoshop and fix them the best I could, not a lot of pixels. But thanks for the suggestion Dianelynn

I am less convinced this is WOL because it doesn’t seem to match any of the pictures I could find at all. But zooming in, I wonder if this was in the Imagination Pavillion?

The red arrow points to ceiling shapes that match the Imagination pavillion “dome”. The green arrow points to a door that clearly is interior, not exterior, perhaps leaving a larger open area or theatre area to an interior area. The blue arrow shows that this rail is not intended for anything more than directing people.

So that’s my best guess. Need to find photos of the interior of the Imagination Pavillion from the 90s.

Interesting! You are a good detective!!! I was looking at the light fixture I’ll start googling as well

Well Scott was close, talking to my son he googled it and it was Mickey’s Starland, now he remembers watching a show there with DuckTales. We found another picture by googling Mickey’s Starland DuckTales cutout!!!
Thanks for all your research!!!Frankly I don’t remember it at all. The only thing I remember was the cow with the hidden Mickey!!! Lol

Ah! And that explains the stars, which I couldn’t place. But Starland is where Goofy’s Barnstormer is… Mickey’s Toon Town Fair now? It has been renamed a few times.

I was focused only on Epcot! Glad you figured it out…so that I can stop obsessing about it!

I remember Minnie Moo though.

I swear it is a different name every time we go. (Not really…but feels that way.)

No, this was before New Fantasyland. It was tucked behind the defunct 20,000 Leagues.

IIRC it was originally Starland and was only accessible by train. Was supposed to be temporary. They then decided to keep it, renamed is Toontown Fair (or something similar), and opened a walkeay between 20,000 and Teacups.

Barnstormer made more sense because it was in the middle of Goofy’s farm where the hidden Mickey cow lived. And was closer.to present-day Dumbo. Mickey’s house, Minnie’s house were on the left, and Donald’s boat was the splash pad. They also has a tent set up behind Mickey’s house where they did Disney afternoon- based stage shows, and you went backstage for Mickey M&G.

Mickey’s Birthdayland was the first incarnation of that area. I remember that well. Our area had a large cornfield shape of Mickey’s head for his 60th birthday, and lots of official Disney fuss.

Mickey’s Toontown Fair was closed on February 11, 2011 in order to build the “New Fantasyland” expansion. Some elements of Mickey’s Toontown Fair have been demolished and others have been re-themed to a new Storybook Circus area. The Dumbo the Flying Elephant ride was removed from Fantasyland and rebuilt in Storybook Circus, the new version doubling the capacity of the old ride and incorporating an interactive queue. The Barnstormer at Goofy’s Wiseacre Farm has been re-themed to The Barnstormer featuring Goofy as the Great Goofini. The first half of Storybook Circus opened on March 12, 2012, which included the newly themed “The Great Goofini”, the Storybook Circus train station which was completely rebuilt and also one half of the new Dumbo ride. The second phase of Storybook Circus, including the second half of Dumbo, the indoor queue area, and the Casey Jr Splash ‘n’ Soak Station opened in July 2012.

I don’t think he was claiming the pictures were from storybook circus, but rather clarifying what the land is called now.

I have oodles of joyful memories from the houses in Toontown Fair.