Where would be the most reliable source with the quickest update? I’m thinking this page may be the place.

My idea of an opening date, (Strictly a guess) would be Feb 20 2020. The opening is clearly not for a few months yet and Disney seems to always play with numbers. Space 220 is supposed to simulate a restaurant that is 220 miles into space. Wouldn’t it be more memorable if it opened Feb. 20 (2/20)

It’s supposed to open before the end of this year. However, the Executive Chef just quit this week to go work for a place in Las Vegas.

No official / exact opening date has been announced.

Originally, there was a statement from Disney that it would be open in 2019. Now they are saying “winter”. We all know this to be a very general term that could extend well into 2020. So, it’s anybody’s guess at this point. The Chef leaving may or may not have much of an impact on the opening, as I have heard bits that the menu was basically going to be set anyway, so the chef role was less about coming up with the menu, and more about making it happen.

I’m praying to all the Disney gods that I can have dinner here the second week of January.

There are posted job opening positions for a Front of House Restaurant Manager and Hosts. This is a sign that they are getting closer. Restaurants typically wait until close to opening to being hiring and training the front of house staff. 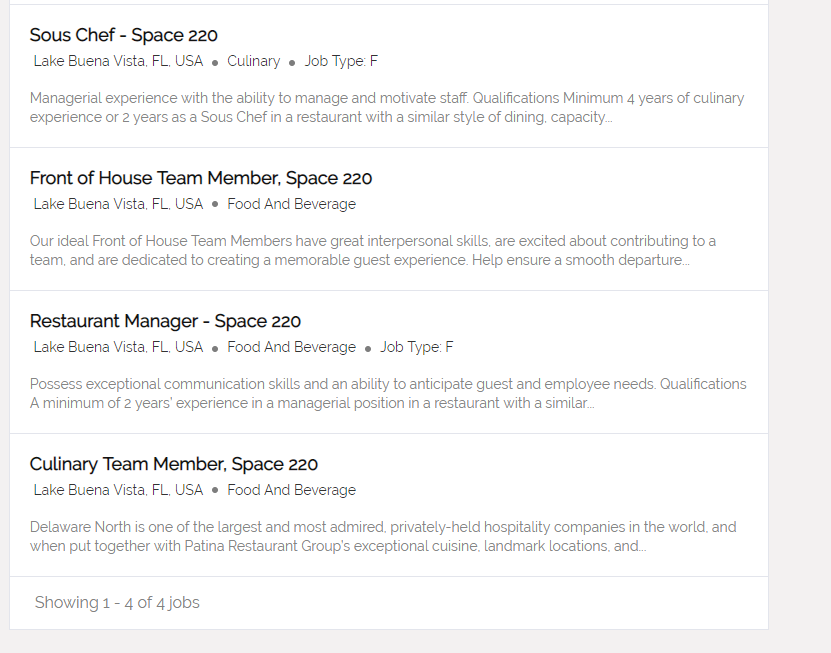 Why would it be Disney advertising the front of house positions, when Patina are running the restaurant? They were advertising in August 2018 for staff, to start training in May of this year.

I think those jobs are actually posted on patina group site. But nonetheless, YAY!! looking forward to this new restaurant. (But also lamenting the fact that they aren’t opening any cool new restaurants in HS where they are sorely needed IMO!)

They’re building a TSL one!

And eventually I’m pretty sure they’ll build the GE one too. Stupid, pointless decision to axe it in the first place, IMO.

I had forgotten about the TSL restaurant!

You are correct. I used “loose” language in my writing. It is Patina that are running & hiring. I know it’s Patina as you can see I got the info off their site. I used WDW because I was being lazy and not wanting to have explain the restaurant ownership partnership.

I will edit the post to avoid further confusion.

I didn’t notice where the ads were from, I just see it as a screenshot???

But that makes sense! I was confused as to what was happening.

Wonder what’s happening with the Head Chef post. Would Patina advertise that or will they have their own “pool” of chefs to choose from?

The simplest way to find out the opening date is this.

Book a non-refundable trip. The opening date will be the day after you get back home.

If someone could book one for a trip ending the first week of January 2020 I would greatly appreciate it!

Mission Control, our launch has been delayed. Turns out this year's most highly-anticipated restaurant... isn't opening this year after all. When we last checked in on the status of Space 220, we found out that the planned Executive Chef, Theo...

Ps some bloggers seem to prefer negative terms to draw clicks… it’s not “delayed” with a wording change from winter to February - it’s just more specific - Winter 2019 is Sunday, December 22, 2019 to Friday, March 20, 2020

In the beginning they said by the end of 2019, which was then changed to winter 2019. So yes, technically it’s delayed

I miss it by one month