What is Hagrid's like now not open during early admission? 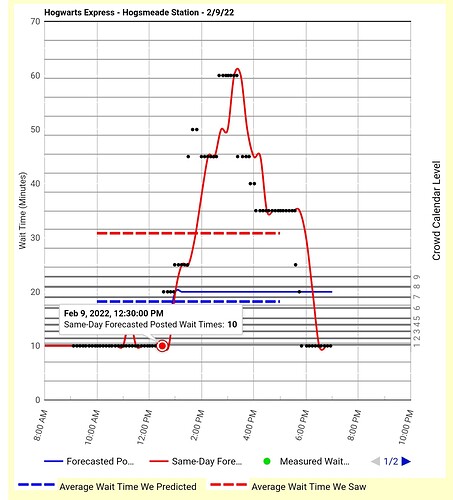 On a Sunday 6/10 crowd day we did VC x2 back to back. Walk on then 10 minutes maybe? My wife took my 48” daughter and RD hippogriff x2 and then we met and did HP then walked around HP land a tad and scoped the absurd hagrids line and then headed towards kong for a 0900 opening. Did SM and would have done Hulk but it was closed for it being too cold. We did hargrids after a sit down lunch to warm up around 2 and waited 45ish minutes. We were 2nd at taps for the park 7:15-20ish arrival time. Granted it was high 30’s low 40’s so maybe EE crowd was lighter? It was busy soon after park opening though.

I don’t know that it’s the best plan, but I’ll tell what we did. We were there for EE from 2/5-2/7 with party of 10 (and 2 of the 3 days arrived much later than I would’ve liked–around 7:35 of 7:40) and followed same approach each day: 1 group did VC and another did FJ or Hippogriff, and then whoever finished first got in line for Hagrid’s, generally around 8:20 (some members of group then spent some time in Hogsmeade, using restroom, getting butterbeer, etc. and caught up by the mystic fountain once Hagrid’s line started moving). On Saturday and Sunday, they started running Hagrid’s before 900, probably 845ish, and we were on by 9:05 on Saturday, and 9:00 on Sunday. I was pretty happy with this approach on Saturday and Saturday–rode VC, waited 40-45 minutes for Hagrid’s, and then wait times still good for everything once off Hagrid’s (plus we had express passes kicking in once park officially opened). On Monday, we made it earlier for EE, so some made it to Hagrid’s line by 8:10, but then they didn’t start running it early–if anything a few minutes late. Didn’t make it on until 9:25, so that morning was less effective–we could’ve caught a 60 minute wait at some other point in the day and used EE hour to more effect if hadn’t started with Hagrid’s. That said, I have more patience for waiting first thing in the morning, and we also had express passes for other rides, so I wasn’t too put out.

Also, it wasn’t necessary to hustle over to the other park to do Gringotts with a reasonable wait during our trip. Both the train from Hogsmeade to King’s Cross and Gringotts had low wait times well into the morning.

I’m here today and have been here since Monday. I’ve done Early Park Admission every day.

Even though VelociCoaster is a headliner A LOT of people won’t do it due to fear. It’s awesome, but intense.

The majority of people still go to FJ and do wand spells during this time. A good number of people just get in line for Hagrid’s even though it won’t open until 9am.

This morning, for example, I basically walked onto VelociCoaster twice in 15 minutes. Whereas FJ posted a 35 minute wait by 8:30am.

This morning I decided to leave WWOHP about 15 minutes before offical park opening and head to Marvel Island. “Regular” guests were already coming in about 10 minutes before “offical” opening. Dr. Doom and Spider-Man were open. (This is dependent on if the rides are fully staffed and finished morning testing. You can’t plan on it though)

You are allowed to exit the park before offical opening if you wish to go queue for the other park.

They do not open the Hogwarts Express “early”. I jumped on yesterday right at 9am with no wait. The wait doesn’t really increase for the first hour.

I was in Diagon Alley by 9:15am and Grigotts was only about 15 minutes posted

Now…I need to add I am “true” rope dropper. I get on the first park bus and at the front of the pack. So, take that into account if your family can’t wake up that early.

We were there in January with CLs of 5-7, EE is definitely worth it to really explore the HP areas! Totally agree with the previous poster about doing spells. We went to EE and part of the part walked into VC while the others just wandered shops and did spells in HP. If that’s not your thing, don’t do it, but I think you really get to enjoy the details of it if you go early! I would echo others and say do NOT get in line for Hagrids as soon as it opens! We had good luck with waits later in the day.

I am a rope dropper too. And I’ve been to both coast universals and been to potterville before the new side was open. They were building the train. I can’t wait to see Diagon Alley, Especially knockturn. My concern is I will be there next Saturday. That is President’s Day weekend

So looking for tips on how to deal with that. In other news Universal Hollywood has had some of the lowest crowds ever seen last week according to friends.

I’m leaving Universal today. (I’m at the airport) The crowds were crazy! It’s not even a holiday weekend.

If you can buy an Express Pass, even for one day of your trip, it’ll be a big help.

People are definitely traveling again! MCO airport is in full swing. It was a madhouse getting through the airport