So we have gone to WDW for the the last two years in early September and we have another trip this year in 10 days for our annual September trip. Last year we rode out Irma and it was not something I think I want to do again. I have been watching the 5 day tropical outlook on the National Hurricane Centers website. All last week was pretty calm and now that we are 10 days out it looks like a storm is predicted to leave the coast of Africa Thursday with a 20% chance of becoming a tropical storm within the next 5 days…I feel like I am now wearing a target and I don’t feel particularly lucky.

Someone please give me some encouragement. Trip dates are 9/1-9/9

The company that I work for has a lot of stores in FL, so there are several teams that are always tracking those things, and they know I am going to WDW so they are supposed to tell me if anything looks bad

It is waaaaaaaaaaay too early to tell…anything. I would stop watching the National weather unless it’s actually going to change your plans. Keep an eye on the local Florida weather. Only when they mention something do you need to be worried. But watching something that has a 20% chance of doing something in 5 days is watching absolutely nothing. Focus on packing and prepping for your trip! And next time, maybe plan a trip for a time of year that isn’t in hurricane season.

I wouldn’t be overly concerned. The update on that page today is:

Since back in the 50s we’ve had hurricanes in So NEngland many times. But the weather folks have predicted far more storms than actually hit, or even came close. One time b/c I was listening so closely, we were living near ocean, so we evacuated apartment, no storm at all.

I have a feeling that it’s pretty much the same case even in Florida. Most of the storms (and there are many that just rise to level of tropical storm or just blow out to sea) are not a problem.

Any local Floridians around, please correct me if I’m being too Pollyannish!

I know y’all are both right but I still can’t help watching. Fingers crossed the current disturbance in the Atlantic does not effect us. They are saying it has a 0% chance of becoming a tropical storm in the next 5 days so that sounds nice.

We’re gonna be there the exact same time and are just planning that it will rain every day, because it does. And rides will shut down due to lightening, because that’s what happens. But unless they actually close WDW, we will be there, poncho’d up and crackin’ on! There is so much to do in the parks to fill time when the weather takes a turn that we’ll just re-evaluate our plans and find something else to do until the storm passes. And if all else fails, sounds like we’ll have a chance for one heck of a liner meet-n-greet! HAHA

I leave in 24 hours lol. This disturbance that is headed straight for Orlando popped up overnight(the yellow one). Oh well definitely wet and rainy which I can handle, I just don’t want to deal with the traffic jams if Florida starts to evacuate at some point in the next 11 days because one of these storms starts to become serious. 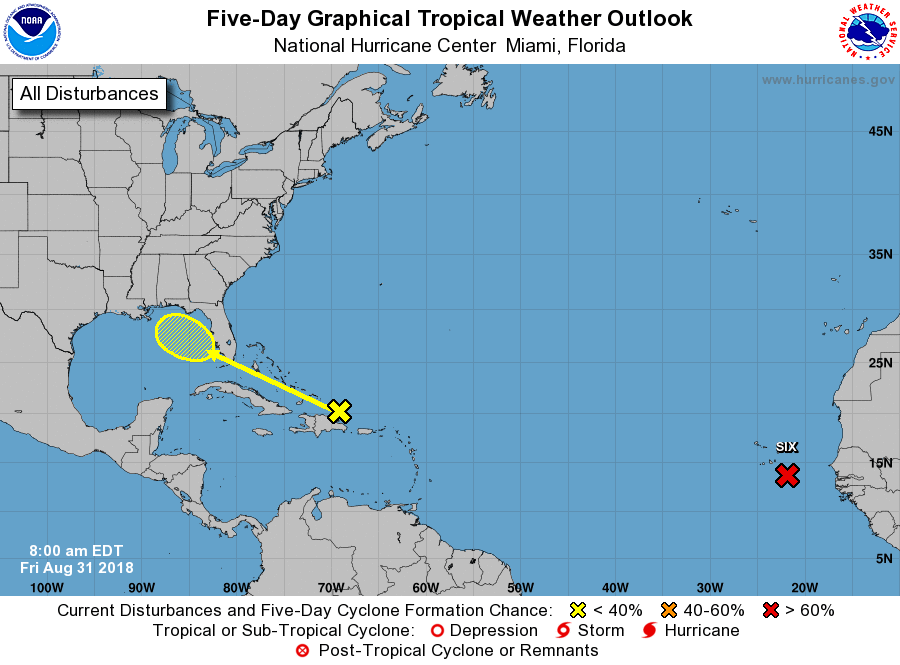 It may mean more rain, but more rain means even lower crowds at the park. We’re going to be there in 9 days, so I’ve been watching the weather very carefully - but at the end of the day our plans are locked in and we’re going no matter what. My advice is don’t get stressed out too much about it - make sure you’re prepared for the rain and have fun! That’s what we’ll be doing.

It’s also still at 40%… which means it’s really far from a sure thing.

Like @DarthJay said, I wouldn’t stress about it, it won’t do you any good anyway. It’s not like you’re going to cancel your trip at this point.

EDIT: in fact, I went and looked up NOAA’s report… the thing is less than that even.

This activity is forecast to spread westward to west-northwestward enhancing the rainfall across portions of Hispaniola, the Bahamas, the Turks and Caicos Islands, and Florida into early next week. Strong upper-level winds will prevent any development of this system during the next 2 to 3 days, but environmental conditions could become less hostile when the system reaches the eastern Gulf of Mexico during the early to middle part of next week.
* Formation chance through 48 hours…low…near 0 percent.
* Formation chance through 5 days…low…10 percent.

True but that’s a 40% chance of cyclone formation, there is still a big bad storm out there that will bring rain and winds but the one behind it is at >60% and thats the one I’m really watching.

Even on that #6, you’re right and they’re predicting >60% it will become a hurricane but also that it will never make landfall but will just curve up north in the Atlantic.

Whoop, you responded before I could finish my edit. No, the formation is less than 20%.

more rain means even lower crowds at the park.

Bingo! It could rain all day as far as I’m concerned. Just hold the lightning. WDW honchos (and more specifically their attorneys, I suspect) take a pretty dim view of lightning.

We are traveling down the 14th, at the rate the storm is moving currently, and the distance it would need to cover, it won’t arrive on the FL coastline till the 12th to the 15th. The current tracking of the storm also is showing a turn towards the NW within the next few days as there is a weak high pressure system sitting over the Atlantic. In other words, if current conditions hold steady, the storm should turn up well before coming near FL. Granted, nothing is guaranteed or set in stone, but it is already tracking further north than Irma was at the same point last year. Fingers crossed…I do remember last year how incredible the weather was right before Irma and for the few days right after as we were there as well. Positive vibes are needed!