I’m hesitant to start this trip report because i still feel like it wont actually happen and thus have not packed, even though we leave Wednesday.

Two weeks ago DH and i were supposed to be enjoying an adult weekend at WDW when our sitter asked us to come home bkz she had gotten a stomach bug from DD3. When we got home that night DD3 had a limp, sitter said she had tripped on one stair. Urgent care the next am said toddler’s fracture (tibia). Full leg cast, no weight bearing up to 6 weeks, i made a list of all the things to cancel (including this trip). Two days later ortho was like nope, not a break, and she has been running around like nothing ever happened. Then, a week to the day after DD first got sick, DS throws up in my mom’s brand new bed. Still not feeling 100%. A week later (3 days ago) DH and I start feeling sick. Then this am, DD wakes up unable to bear weight on the OTHER leg. DH sends us to the ED. A traumatic blood draw and some xrays later, she’s fine, they dont have a clue. Oh, and we are flying southwest with a connection. And our park time is very limited anyway, so given the good chance of delays, i dunno WHAT we will accomplish. The current plan is this:

Me, my mom and the kids fly down wednesday arriving at 430. Originally we were on a direct flight landing at 3 so my mom bought her and the kids after 5 convention tix (i have a regular one, i cant control what she does

) and then 1 day hoppers for thursdsy. Then SW cancelled our direct, and after some web stalking, we now leave 3 hours earlier and hopefully get in 1.5 hrs later than before at 430. This flight is delayed decently often, though, so im not super optimistic. Anyhow, so:

Weds: arrive mco, take away we go transportation to poly, check in club level and grab some snacks in the lounge, grab mom’s scooterbug ecv rental and maybe get to hollywood studios by 730? 8? There are deluxe extra hours til 11, and we are only aiming to ride 3 things (rotr, mmrr and sdd), and my kids need to be utterly wiped to sleep at all in a hotel, so maybe?

Thursday: even though we are planning a late night there’s no way the kids will sleep past 6, so we plan to RD MK and have 1 target ride per person - dumbo for mom w her grandbabies, pooh or ariel for DD, philharmagic for me (i havent seen the coco version and i know better than to put my kids on PM or HM lol) and splash for DS. We have an 1140 skipper canteen res that we may bump and run. Then heading back to poly for a couple hours of down time and some pineapple lanai before my mom’s main request: Pandora, and at night. My goal is to get there before the final FFF at 330 but if not, oh well. Plan is KS, 540 tiffins that may also get bumped, FOP and the valley at night.
Friday, we have a 730 chef mickeys because weve never been, but that will depend on what time DCL bus picks us up, which we wont know til thursday.
Then we have an inside stateroom on a 3n cruise on the Dream. My kids’ first cruise and mom and i’s first once since 2009. We arent planning to get off in nassau.

We get off the ship monday morning. Im renting a car, and we are planning to play Winter Summerland and have a late lunch at Sanaa. Im excited to show mom the jambo lobby before we head back to the sirport for our 7p flight. I had thought about doing 10a-4p at f&g, but the logistics of the ecv rental, the cost and the airport issues made me reconsider.

Anyway, follow along to see how it goes! Will we actually get there? Will we make it to the parks? Maybe 1? All 3 as planned? WHO KNOWS?!

Good luck! Hoping this trip goes more smoothly than the last one.

Have all the fun!

Also sending good vibes your way for a successful trip!

We arent planning to get off in nassau.

Good plan. We stayed on the ship and took advantage of the emptier ship.

Following along! Excited for you! Sounds like you need a break from life (I can relate).

Fingers crossed for a fun, uninterrupted trip this time around!

Well, i am packed in two tiny carryons and sw has not yet cancelled our flight so

Well, g+ was a bit of a mess this am. Kids bouncing off the walls and me trying to get a very narrow window of 6-9p for SDD just didnt work. I got a 415 but had to drop it because we wont get there by then. And then i got this and of course by the time it would load they were gone. At the 708 drop a 430 showed up but couldnt use that either.

Screenshot_20220413-070915_Disney World1080×2400 153 KB
Which is perfect timing wise. I really wanted to snag ToT but since DD can but shouldnt ride it if i want to sleep ever again, i went for MFSR. hoping we can hit mmrr with short lines on the way out. SDD we will just have to see if anything drops, cause i wont wait more than half an hour.

Cross your fingers our flights stay on time… heading to the airport soon!

Following along! Excited for you! 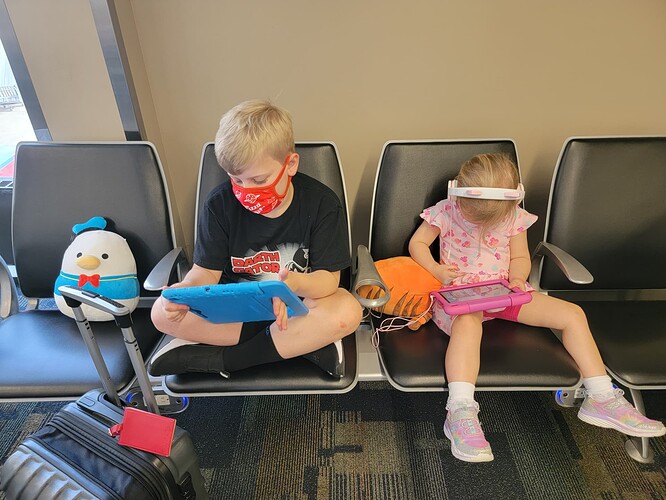 Nice to see Donald wearing his hat. It’s so unsettling when he takes it off.

I am so happy to see good updates this morning. I was thinking about you from the minute I woke up

The Easter bunny came early (because mommy got nervous about checking bags and decided not to carry all the basket junk) and brought Donald and tee-gur squishmallows. They insisted on coming along.

Do your kids enjoy flying?

Donald and tee-gur squishmallows. They insisted on coming along.

Pushy, but I would do the same in their shoes.

Yes! Its just DH that is mortally afraid of it. He can inflate a fracking balloon to 30x tire pressure inside someone’s faulty mechanical heart valve to break it, no sweat, but he needs a few jack and cokes to fly.

He would probably be better off if he could fly the plane!! He could control the ride and would not have to be a passenger.

I thought the same. Sometimes people who are so talented and gifted at something really difficult but under their control can struggle with simpler things when control must be submitted to others. Not certain that’s what’s going on with DH here, but an MD friend of mine has similar tendencies.

Hoping for a nice smooth trip. You’ve got this.

Well THAT is the most apt description ive ever heard.