Updated Crowd Levels for the 4th of July in WDW?

I keep waiting for the crowd level predictions to change for the 4th, but we’re awfully close now. I mean, I will be crazy thrilled to have it be 5/10, but I’m expecting 10/10. Are these going to stand?

When I was there last year, we specifically planned to avoid the parks for the most part owing to what we expected would be crushing crowds.

We did pop into MK for lunch and a stroll/shopping and we’re stunned at how NOT busy it was.

Here is a pic of the hub area around midday: 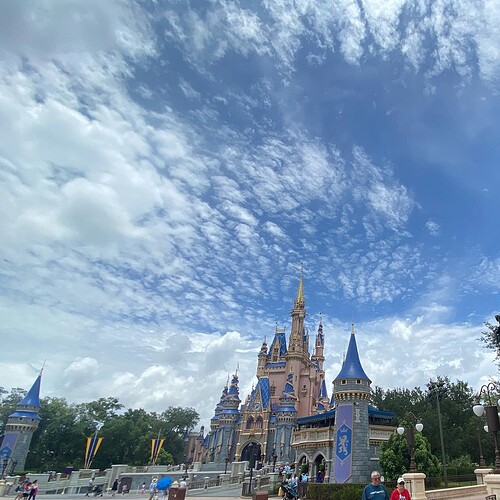 Now that said, we left before 2 I think and they had portable fencing set up to manage the crowds that came later. The evening was reportedly as nuts as you’d expect. But the daytime hours were not bad at all

CL’s have been averaging 1.5 level under predicting.

We did pop into MK for lunch and a stroll/shopping and we’re stunned at how NOT busy it was.

Crowd Level™ is not based on crowds, but on the number of doughnuts in Len™’s Magic Bag. The doughnut shop was closed for Independence Day.

I would expect it to be a 7 or 8. So plan for it to be busier especially at night before , during and after fireworks. I bet many will hop to MK.

Since CLs are based on the wait times from 11 a.m. to 5 p.m., the current CL may be correct or raise a point or two. However, be prepared for a lot of parkhoppers come in when the sun starts to set for the special fireworks.

I’m hoping the crowd levels are accurate. Either way, our plan is to avoid MK on July 4 - we’re trying our luck at AK that day before hopping to EPCOT for the EE hours.

Heads up. A Crowd Calendar update is coming out soon. On average, crowd levels will increase by about 1 point.