We are first timers to the US and hope to make the very most of our 15 night stay at BC in early November. At the risk of upsetting everyone … my DD14 is Harry Potter crazy and as a surprise I was looking at a day trip to Universal Studios … anyone done this ? advice etc greatly appreciated

It will be worth it or not depending on how much you are willing to spend. If you want to experience both Harry Potter areas then it’ll cost you around $140 a person for a one-day, park-to-park pass. That’s on top of transportation if you don’t rent a car. We are HUGE Harry Potter fans but find that too expensive for one day so we don’t usually go to Universal Studios for just one day.

However, if money is not an issue then you won’t regret doing it. The Harry Potter stuff is amazing and if you focus specifically on the Harry Potter areas in both parks you can do it all in a day (and very likely get some other rides in as well).

Park to park ? Aren’t they together … god what a rip off ! Well my DD has only 3 requests …a Harry Potter wand from Olivanders … a chocolate frog and a butter beer ! Just want to get as much Potter in as possible in one day … so used to now submersing myself in all things WDW that I don’t have a scoobies with Universal

Hi, we are doing this in August. I know it’s silly money for just one day but we are massive HP fans and are unlikely to be back in Florida so we are taking the chance whilst we can. Planning a full in day there to immerse ourselves in HP and if we have time for extras, we will consider that as bonus.

Park to park ? Aren’t they together … god what a rip off !

Hogwart’s Castle and Hogsmead Village are in Islands of Adventure, and Diagon Alley is in Universal Studios. The two are connected by the Hogwart’s Express train. To ride the train, you need a park-to-park ticket.

I think @Lux1972 puts his finger on the key issue. It’s about money. You’re from the UK — how often are you likely to revisit? I made my first trip to Orlando last summer. I assumed it would be a once-in-a-lifetime trip and I wanted to make sure I left with no regrets. So I blew the budget. Big time. And I have no regrets. But I’m also going again this year because the whole experience (Universal and Disney) was so amazing.

The Harry Potter stuff is incredible. Hogwart’s Castle is huge and utterly realistic. Diagon Alley is exactly as you imagine it to be. The whole place is like a movie set. The experience is utterly immersive. It’s incredible. If you’re even remotely a Harry Potter fan you’ll remember it for a lifetime.

One full day is enough to do all the Potter stuff. But you have to go all-in. You’ll have to get the park-to-park tickets because the Hogwart’s Express is a key part of the experience. King’s Cross station is so realistic that — for an instant — I honestly thought I was back there.

The rest of Universal is terrific, too, but it’s a completely different thing — and it’s different to Disney, too. The rides are mind-blowing — technologically incredible. Quite unlike anything I’ve been on before.

If you’re in Orlando for 16 days, you can definitely make time for Universal. (And if you’re staying at BC that whole time, I’m going to assume you’ve not completely short of cash!) I would 100% recommend taking your daughter to Harry Potter. You’ll spend the day falling in love with the look on her face as she discovers each new thing. Worth every penny.

I agree with @profmatt, it is definitely worth it. We came from UK to Orlando for a 14 day trip and took a day for universal and it was totally worth it. The HP stuff is truly amazing and the forbidden journey ride was one of my favourites from the whole trip. You will not regret getting park to park tickets as the Hogwarts express is an experience worth having, we rode it both ways and would have gone again if we’d had time. Personally I thought one day was enough for us, And I certainly didn’t want to take another day away from Disney. Apart from the HP area we mostly walked around enjoying the weather and shows as none of the party were big thrill seekers- MIB, Transformers and Minions were pretty much the only other rides we went on but even then I would say it was worth the money

I agree with everything @profmatt said. If your daughter is an HP fan, you absolutely must go to Universal. I am a big Disney fan, but the level of detail and complete immersion in the HP areas at Universal far surpass anything Disney has to offer. You can honestly get lost and feel like you are living in the movies. Yes, the cost is high, as is any one-day ticket to any major theme park, but it is well worth it.

What about your first night at one of the Universal hotels? If you stay at one of the three preferred hotels there you get a line cutting pass and early admission to Harry Potter (assuming there’s no minimum stay required to trigger that benefit - I didn’t check). You could go out to CityWalk on your arrival night, do HP the following day, and then transfer to BC and do Disney for the rest of your stay? I don’t speak from experience - it’s just a thought.

If you can make it happen, definitely go! I am NOT a HP fan at all but DH is. We went to Universal for 1 day and we were able to do everything we wanted, including spending a lot of time in HP world.

We are going back to WDW this September and we have included 2 days at Universal (my idea), because I want to spend more time in HP. I think that says a lot about how incredible HP is. It’s worth the cost to be able to get the full experience by going to both parks imho. Hope your family has a wonderful time - your DD will remember this for many years to come!

Nope, there is no minimum stay required for the Express Pass. Plus, one night stay gets you EP for arrival day and departure day!

we are doing 10 days disney adn then 4 nights at universal staying at hard rock hotel so getting express pass for 5 days!. i think if you can afford it and you are goign during school holidays then def worth a night in one of the 3 hotels at universal that get you express passes included ( you still need park tickets) We will then probably take advantage of early entry for hotel guests to volcano bay as that doesnt have express pass and my kids love a water park ( will be doing both the disney ones too)
universal is a different market to disney def aimed more at the 10+ age group, with a lot more thrill rides with higher height restrictions than disney.

I’m the naysayer around here. To me, Universal has it’s niceties, and we’ve gone twice (once to see Hogsmeade, and the recent trip due exclusively to the addition of Diagon Alley. Both times we were like, “That was nice. Unlikely to go back.”

The Butterbeer is a disappointment. (Good, but nothing to write home about by any means.) And the Chocolate Frogs don’t even have one good jump in them!

And even though we went to Universal during one of their low times, the streets of Hogsmeade and Diagon Alley were, at times, overwhelming. It was hard to really enjoy it since it was shoulder-to-shoulder crowds. I can only imagine what it would be like during a busy season.

Having said that, if you have money to burn, it is worth seeing once. The Wizarding World of Harry Potter is visually stunning, surpassing anything Disney has put out as far as theming. But if I were already going to Disney, I’d rather extend my Disney trip another day than do Universal. We go back to Disney ever 2 to 3 years. It is unlikely we’ll be back to Universal. (Yes, we said that once before, and after our trip this time we all kind of wished we had, instead, done Disney again instead of Universal.)

So if you can afford it, go for it.

You won’t regret it! If the budget allows, try the frozen butterbeer. It is to die for!

try the frozen butterbeer. It is to die for!

This, I just don’t get. To each their own, I suppose, but while everyone in our family felt it was enjoyable, no one thought it was particularly great. And considering how much they charge for it, there are plenty of other treat options that are a far better value and better tasting.

I was disappointed with both the cold and frozen butterbeer that this time I didn’t get either (I did take a reminder sip of my wife’s frozen in case my memory was fuzzy), so instead I got the butterbeer fudge. It was, at best, okay. Very bland.

Sometimes I think people just WANT to love butterbeer because they are Harry Potter fans and feel like they would be somehow be less of a fan if they admitted it wasn’t that great. But then people like yourself say, it is “to die for”.

I just don’t get it. The Ben & Jerry’s ice cream I got outside of Diagon Alley was orders of magnitude better…and cheaper!

Well, I liked it. Enough to buy three cups of the frozen stuff (one each day) and the butterbeer dessert. But not the fudge. Must try that.

I can buy that anywhere. You can’t buy butterbeer products anywhere. That’s part of the fun.

Well, if we’re going to go all negative about WWOHP, I will say that I didn’t particularly enjoy either of the HP rides and I thought both the Three Broomsticks and the Leaky Cauldron were poor.

If you want to get ripped off, the Gilly Water is the product to buy. It’s $3.99. And it’s water. In a small plastic bottle. Labelled Gilly Water. 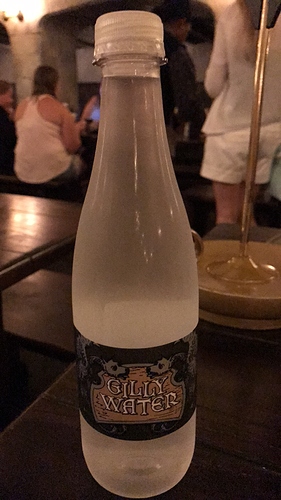 If you want to get ripped off, the Gilly Water is the product to buy. It’s $3.99. And it’s water. In a small plastic bottle. Labelled Gilly Water.

But did you try breathing underwater after drinking it?

Well, if we’re going to go all negative about WWOHP, I will say that I didn’t particularly enjoy either of the HP rides and I thought both the Three Broomsticks and the Leaky Cauldron were poor.

We didn’t try the Leaky Cauldron, but I do agree about the Three Broomsticks. My pasties, for example, were mediocre at best.

The rides are okay, but there are plenty of better rides elsewhere in the park. Rip Ride Rocket, The Mummy, Kong, etc. I think the queue lines for the HP rides are more interesting, though, than the rides themselves.