On Black Friday we got up stupid early to catch a 6am flight to Orlando. I didn’t trust Spirit airline to get us there on schedule, so I didn’t commit to much on our arrival day. We actually checked in to our hotel before 11am, and much to my surprise, our room was ready! We stayed at the Orlando World Center Marriott, and I’d recommend it to anybody who has a Marriott free night to spend in this area. We had a great lunch at the pool bar (our only real food all day) and enjoyed the pool and water park until around 2pm.

We got a Lyft over the the Boardwalk, rode a surrey bike around the lake, and went to Beaches & Cream for a kitchen sink. Everything in that sentence tells you that this trip isn’t about me.

The kitchen sink was a dream for my kid, so I stalked reservations and made it happen. Also, that was dinner. We probably ate two thirds of it.

We were in bed by 8. See you at Universal in the morning. 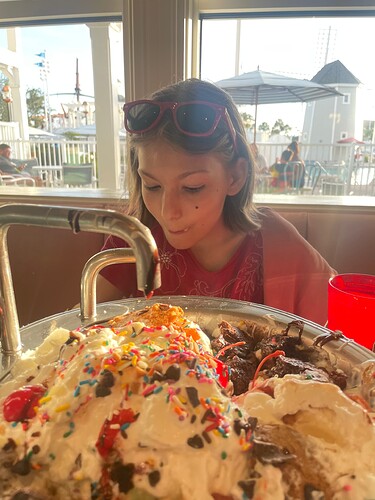 Have fun at UOR …

Thanks for sharing with us and have fun!

You know you made a life long memory! So sweet! (pun intended!)

It’s Saturday, and we got up at 5am our time so we could transfer to Hard Rock Hotel and hit the parks at first opening. We rope dropped the minion ride, which my kid LOVED.

Then we found ourselves in a strange ghost town. We’ve never been here before, and between the fake stores and the closed restaurants it felt like they just forgot the park was supposed to open. We wandered around, bought lanyards, ask two employees where to buy freestyle cups (they did not know), and eventually found an open drink stand. So weird how there’s hundreds of people wandering around and nothing open.

We mostly followed our TP, with RRR as soon as it opened (I skipped that one, but kid loved it), followed by Transformers, Mummy, Fast & Furious, Men in Black, and Twirl-n-Hurl. Then the Animal Actors show, which I kept on the TP so I could just sit down for a minute, but it was really fun.

I loved the preshow actors at F&F. “Are you the partygoers? It’s 10am. A. M. What are you doing here?” I see why people don’t love the actual ride. Was it just my bus, or were there a bunch of confusing water effects?

Then we were hungry, and also making great time, so we went for lunch at Krustyburger. I felt bad for the staff there. Half their time is spent telling people where to stand, because it’s just not arranged well. They did a good job with our allergy order.

After lunch we hit E.T and the Simpsons ride, and now we’re in line for the Hogwarts Express. Kid is having an awesome time.

I agree with whoever warned me about the Simpsons ride. That one threw me around more than I needed. It was the only ride where I felt noticeably worse when I got off. (Did I say I skipped RRR?) Transformers wasn’t comfortable when Megatron was shaking us, but it didn’t leave me walking funny.

I loved the preshow actors at F&F

Yes!! They were so funny.
Noone else we were in line with seemed to be listening to them. I was laughing and applauded them when we left the room and it seemed like people around me were wondering what I was all about

Switch your ears on people!!!

The team members are the best part of the attraction. The ride itself is meh but they are hilarious.

Then we found ourselves in a strange ghost town

Yeah it sure is different than Disney where everything opens early.

The only other attractions open early in USF besides Minions are in Diagon Alley.

The moment we got off the Hogwarts Express, it became a crowd level 10 day. We were ahead of schedule after a great morning in USF, but IoA consisted of approximately fifty eight trillion people standing around bumping into each other in hot weather. I tried to optimize my TP, but the Lines app kept saying the first thing we should do was the frog choir show more than an hour off, so we set out in search of . . . anything. Hard do to without a functional map. We did catch the Triwizard rally, and stumbled into a nice short line for Hippogriff, but after that I dragged my kid out of Hogsmeade because I couldn’t stand the crowd. We located our first freestyle machine (I was beginning to think they were a myth) on our way through Lost Continent, stopped at the fountain that’s supposed to heckle people (not talking today), and made our way to Seuss Landing.

I asked my daughter what I should call her in this trip report, and her response was “She Who Must Not Be Named.”

SWMMBN was grumpy about leaving the Wizarding World, but she tried to be a good sport about my enduring love for Dr. Seuss. We did the trolley, storytime, and Cat in the Hat, then I gave her the option of heading to the Marvel area for big kid rides. Halfway to Dr. Doom she changed her mind, so we rerouted to Storm, which I didn’t realize until we got there was a circles-in-circles ride. I opted to watch from the side, where I chatted with another mom who was also watching her kid. She pointed out that it’s circles-in-circles-IN-CIRCLES. Hard core.

By then it was 4:30 and the heat was dissipating and I was hungry, so we’re back in WWoHP for dinner at Three Broomsticks. The crowd is still insane out there. Here’s hoping they all leave while we’re enjoying our dinner.

Looks like my photos didn’t stick. Here they are, for the first or second time. 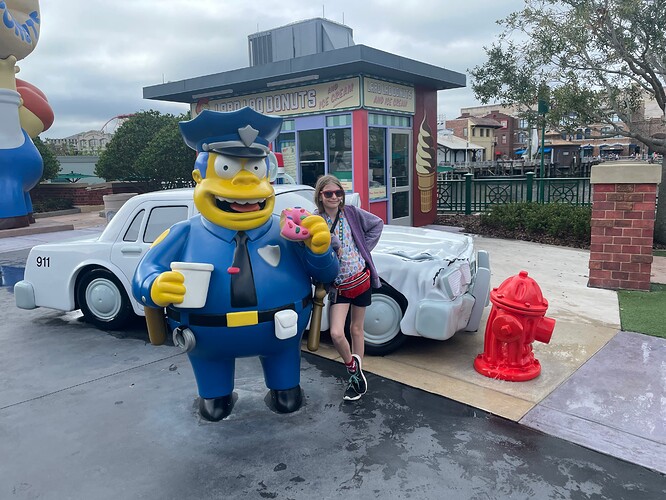 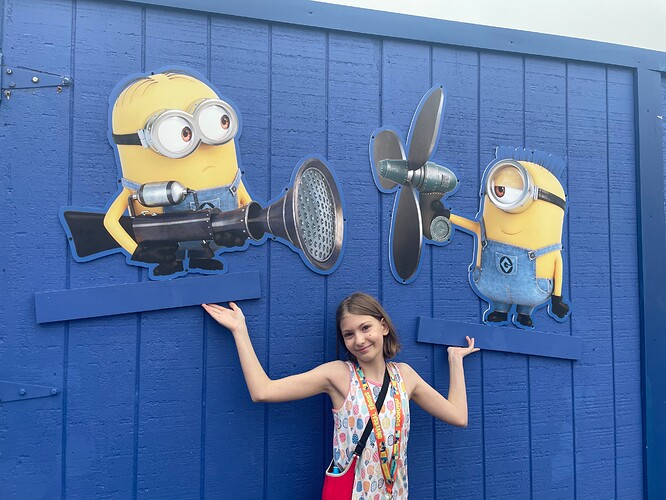 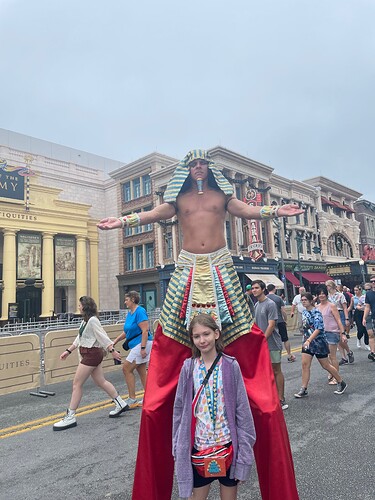 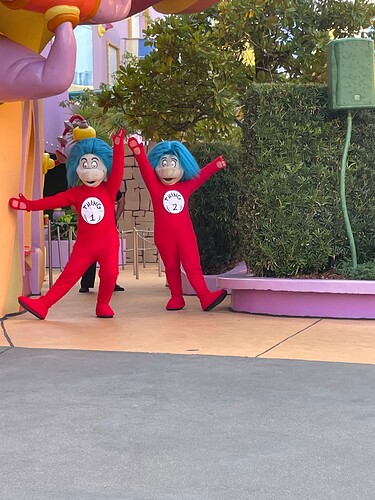 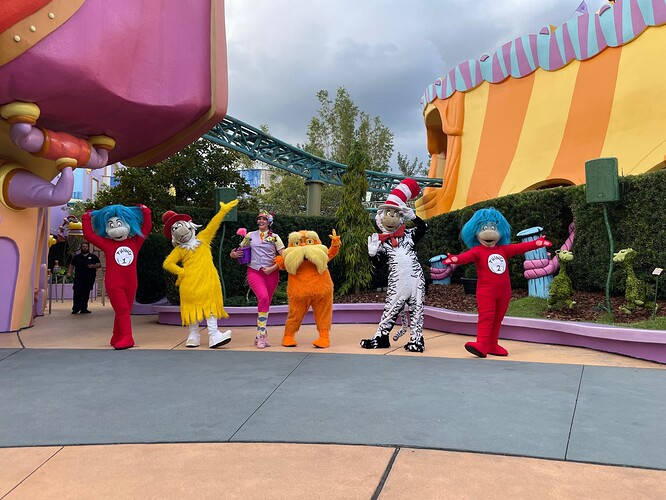 We located our first freestyle machine

Not sure how current this is, but here are maps with the locations and then detailed below the maps. There are 10 in each park.

Thank you! Those maps are much better than the any of mine.

I asked my daughter what I should call her in this trip report, and her response was “She Who Must Not Be Named.”

We rode Forbidden Journey and got kicked out of Hogsmeade. Everyone getting off the ride is routed through Jurassic Park and invited to walk all the way around through Lost Continent again. SWMNBN wants ice cream and I’m over Hogsmeade, so that’s the end of our day in IoA.

I loved the preshow actors at F&F. “Are you the partygoers? It’s 10am. A. M. What are you doing here?” I see why people don’t love the actual ride. Was it just my bus, or were there a bunch of confusing water effects?

The pre-show and seeing the props in line is the reason to go on the ride, for real. I always make sure to object with them if I can. We warned my roommate’s boyfriend how bad it was going to be going in, because he was legit excited. We really, really at the bar low and he was still disappointed.

Well. SWMNBN wanted BUTTERBEER ice cream, so we ended up in Diagon Alley. The crowd level and the entire mood was much lighter there.

Obviously, we went through the show at Ollivander’s four times. My expectation was to buy a wand and watch SWMNBN try all the spells. Her expectation was to be chosen by a wand. Or the magic might not work! Don’t tell her she’s a muggle. By the fourth time through, everyone working the attraction recognized us. Half of them heard me tell her this was our last attempt and then we’re done for the night. I made eye contact with the wandkeeper and pointed at her before he got into his spiel. Finally! 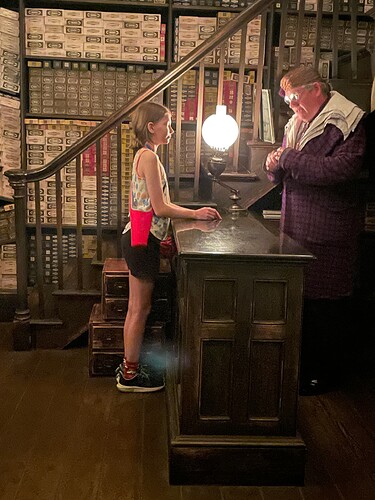 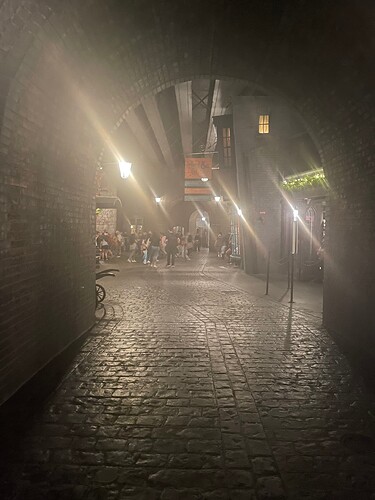 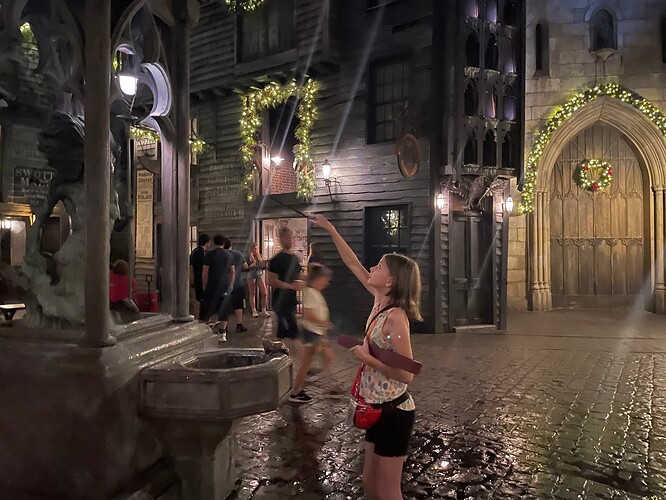 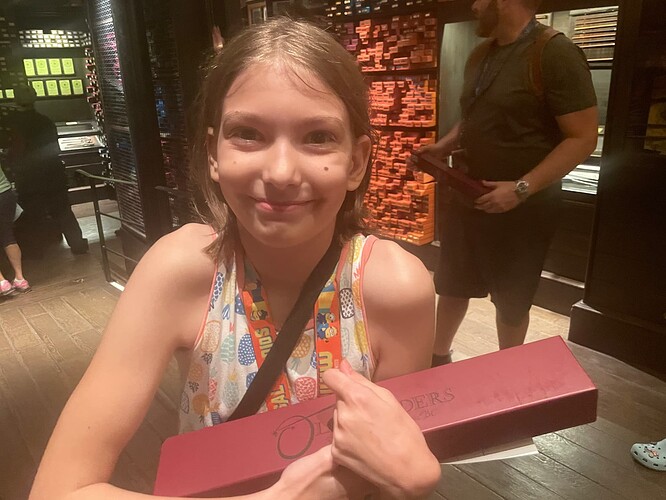 I’m glad the TM got the hint! It’s always at their discretion! That smile with the wand box makes it worth it though!

Need to see the wand

The same wand that was handed to two other children last night, but I don’t think she noticed. She was particularly thrilled to hear it has a dragon heartstring. 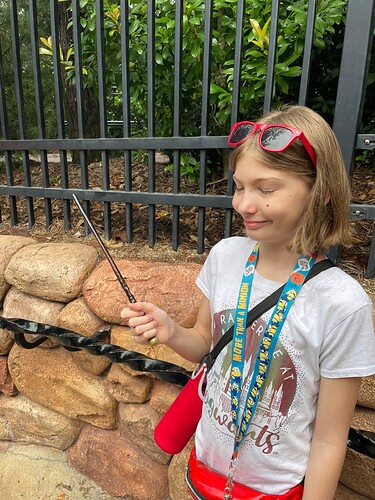