Shopping at Disney. It can be fun. But it can also be tedious.

It often seems that every time you go into a shop, 90% of the merchandise is the same as at all the other shops, aside from the stuffed animals or shirts that match the ride theme. And, of course, ALL of it seems to be available at World of Disney at Disney Springs, which makes shopping in the parks more about getting into A/C than it is about actually shopping.

This leads me to wonder…where are the places you find the most unique shopping at or around the parks (resorts) NOT including Disney Springs? Because, frankly, I just don’t need to see yet another Winnie the Pooh, Mickey, or one of the Seven Dwarfs. I got enough of that at the shop next door!

Mainly around World Showcase I would say.

Agreed. First place that comes to mind is World Showcase. I always, always take at least 15 minutes to browse at Mitsukoshi.

It has been years since we’ve successfully been able to shop around WS. Last trip, we reserved a special day JUST for WS, but since the food and wine festival was going on, it was so crowded, we couldn’t enjoy it and left very early. Next trip should be much better!

I’d say during Food & Wine, if you get there right as they open (11:00), it shouldn’t be too crazy. Especially on a weekday. Daytime is best for any World Showcase stuff during F&W, I say.

We weren’t actually there FOR the F&WF, but were there DURING it. We got to Epcot WS when it opened. By noon, it was super busy. By 1:00, it was shoulder to shoulder crowds and could hardly move.

But you’re right. The morning hours were not bad. But the end result was we only hit about half of WS before we had to abandon ship, and even then we were kind of rushing to get ahead of the crowds.

So my advice now is to avoid F&FW!

Next visit will be second week of December. Hopefully we’ll actually ENJOY WS and can do more shopping.

There is a shop in Disney Springs we like. It isn’t exactly a shop. But this place that has individual vendors in it that are more unique. (We bought our DS18 some Monorail socks there this past February for example.) The items they sell there aren’t found in the parks, nor WoD.

That series of shops – the enclosed walkway, yeah? Lots of brick, maybe a fountain? Love those stores … they have some top notch goodies in there … but like most of Disney Springs … $fancy$.

Oh - have to mention. The Coca-Cola Store™ Rooftop Bar.

Get the 12? drink sampler (with or without ice cream) if you want to try sodas of the world. It’s a must-do every trip for us and our visiting friends now. Some of them are pretty terrible – I mean – different.

Culture, and all that.

Oh, no. That is further down. This place is on the end near WoD. But the shops you are talking about are more general high-end shopping, like Vera Bradley, Tommy Bahamas, etc. Those are fun to go in to look around and realize how rich I am NOT.

Okay. I looked it up. It is called the Marketplace Co-op, what I’m talking about.

I have been to the Coke store just because it is there.

Those are fun to go in to look around and realize how rich I am NOT.

Yes, you nailed it. We shop there with our eyes and our camera phones.

And I just realized I sound old when I say this. It’s like my parents saying “Nintendo games” for all video games, or “taping it” for recording a show.

And I just realized I sound old when I say this. It’s like my parents saying “Nintendo games” for all video games, or “taping it” for recording a show.

I held up to my kids a 3.5" floppy disk once and asked them what it was. One DID come up with floppy disk, but the others looked at it and said they recognized it but didn’t know what it was.

I informed that it is, in fact, a “Save icon”. They immediately recognized it.

To this day, software still uses this archaic Floppy Disk as an indication to save something even though we have an entire generation who has never actually laid eyes on a physical floppy disk. (And let’s not even discuss the 5 1/4" or the 8" floppies!)

My first PC had a 32mb hard drive.

My first computer had a datasette. (Data written to an audio cassette tape.)

But I suppose this is now completely off topic!

Yea. Still have my eye on the $37,000.00 Crystal Cinderella Castle in Germany

Still have my eye on the $37,000.00 Crystal Cinderella Castle in Germany

Big spender. I just want the $800 Millennium Falcon at the Lego Store.

Not sure what I’d do with it. Or where I’d put it. But, I mean. It is the Millennium Falcon!

Yea, I would have bought the castle, but polishing all those crystals … just not enough hours in the day

Just get this one instead: 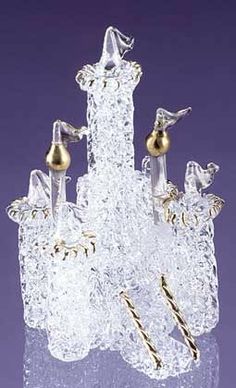