I’ve needed to call WDW a few times this year to make or change bookings. Each time I’ve been hugely impressed by the cast members I’ve dealt with.

I can be quite grumpy and even curt with people I don’t know (and, actually, with ones I do know, too) but I find myself being ultra-polite and courteous to WDW cast members because they’re so nice. Even though my cynical side rolls his eyes when he hears “Have a magical day!” it turns out that I’m not completely dead inside because that phrase does wake something up in me and makes me want to be nice to other people!

My second thought is actually slightly related, insofar as it’s about me not being wholly dead inside. Am I the only person who’s traumatised by the plot of Finding Nemo. I haven’t seen the movie, but I saw the show at AK last year, and I found it really difficult to watch. A father losing his son – what’s more traumatising? And a son being lost and alone, away from his father – what a horrifying thought. For which reason I won’t be seeing it again this year. I nearly cried. I can deal with people being turned into furniture, but losing a family member is not something I want to think about.

One of my sons found Finding Nemo to be one of the scariest movies he has seen for this very reason. He found it so incredibly sad he could just never get over that part to be able to enjoy the rest. He refused to see Finding Dory.

Is there a Disney movie that it is not traumatizing? Bambi, Dumbo, even in Frozen the parents die. Have you seen Walt Before Mickey (thinking of scene with his little mouse friend on the street with him when he is homeless?). I have sobbed during them all but loved the beauty in each one. So maybe your thoughts aren’t really unrelated. That magic just has a way of turning things around!

You make me laugh.

Not at you. Just love your observations.

I cried for a good 20 minutes over that little mouse. DH thought I had cracked. I had to pause the movie and compose myself. 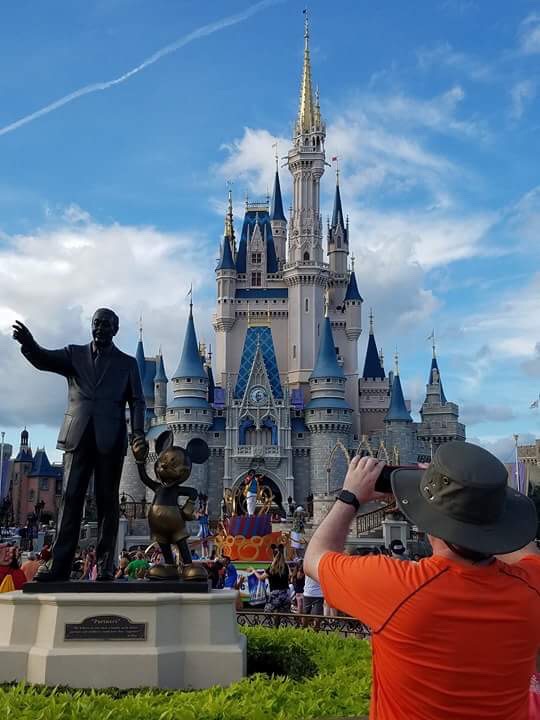 I think just about every Disney movie has some tradegy. I can think of an exception or two Moana, but she lost her grandma and Pocohantas. Brave wasnt too bad.

I had heard it is mostly a plot point. a way to move the movie. Otherwise it would take too long for the path to be developed.

Nemo was a favorite movie of my kids. Yes it was traumatic but both nemo and marlin grow during the movie.

Nemo is horrifying! If you haven’t seen the movie, there is a tragedy right at the start. It’s a tough movie.

Don’t watch Big Hero 6. That for me, was a tearjerker.

Do you like the one of Roy and Minnie in Town Square? “Sharing the Magic” is so very sweet, especially if you learn the meaning behind it.

I’ve been making my way through a podcast series called “ConnectingWith Walt” and it is just fascinating learning the history of Walt and his Parks and all of the incredible people who have been a part of creating them. Check it out if you have the time! I’m waaaaay far back toward the beginning still but it’s historically based so it isn’t "stale"
In the same way that the podcasts focused on what’s new in the parks might be if you were two years behind

I really feel that you and I miiiiiight be the same person. I love Craig & Michael and their knowledge of all things Walt and Disney.

I feel like the original post could be it’s own disney plot. ‘Profmatt realizes he does have a heart after all.’ Throw in some singing and dancing, anthropomorphism and we have a hit!

Am I the only person who’s traumatised by the plot of Finding Nemo.

That is what makes it so compelling. The lengths that a father would go to, particularly one who is usually as scared as Nemo’s father is, to track down his son is inspiring. The reuniting of them is definitely emotional.

Profmatt realizes he does have a heart after all.

Perhaps we should call him “Tin Man” from now on…

Perhaps we should call him “Tin Man” from now on…

Perhaps we should call you Poopy McPoopface.

I don’t know what means.

But Tin Man always had a heart. He just didn’t know it.

I don’t know what that means

In your case, I sensed cruelty in naming me the Tin Man so I lashed out.

To make it up to you, here’s a scene from Family Guy: