Lately I’ve had things that I just wanted to share here, but not necessarily a question, or anything I need help with…like my safari zone post. I just thought it was funny that my boyfriend keeps calling AKL in the safari zone. So anyway, I just decided to make a thread for all the random stuff. I hope that’s ok. I’ll introduce us.

Chrystal- that’s me. I’m 40 and a Disney fanatic to the average person, but just an average fan to true fanatics. I had a Disney wedding, but made sure everyone knew I wasn’t a princess. I’m not into SW, like at all, but am interested in walking through the land. I haven’t been since 2011. After my wedding I was kinda burnt out from taking so many trips in a short amount of time. Started getting the fever and Matt said he would bring me for Christmas (my gift, not time) but then I found out I was pregnant!!! and delayed. I have only my 2 year old- I started late.

Matthew- 41, my boyfriend of 4ish? years. We “dated” in jr high= we talked on the phone for a week, then had crushes and flirted all through high school. Reconnected on FB after my divorce. He lOVES SW and Indiana Jones. Matt is soo tired of hearing about DW. He really didn’t like the idea of going at all until I told him there was SW stuff. We planned the trip thinking it would be before opening of SWGE though. He has an adult son and daughter, a 12yr old daughter, and our son. Matt went a few times as a child/teen but can’t wrap his head around the concept of 4 parks +. He still thinks DW is Magic Kingdom and remembers Epcot and Pleasure Island.

Harrison- 2. According to his Dad, he was named after Harrison Ford. He did throw out the name and it was his first suggestion that I liked. He was born on 7/13/17 and we found out earlier in the day that it was also Harrison Ford’s bday, so that was pretty cool as we had picked his name months earlier. Harrison likes Blippi and shoes. We don’t have cable so he doesn’t watch the disney channel, but I try to find him stuff on netflix/prime to watch. He recognizes Mickey and Lightning Mcqueen. He hasn’t wanted to watch Toy Story, but his grandma just got him a Woody doll so I’m hoping that will help.

Edited to add Kayla, 20. Stepdaughter’s friend + Stepson’s ex girlfriend. Neither of them are going with us, just her. 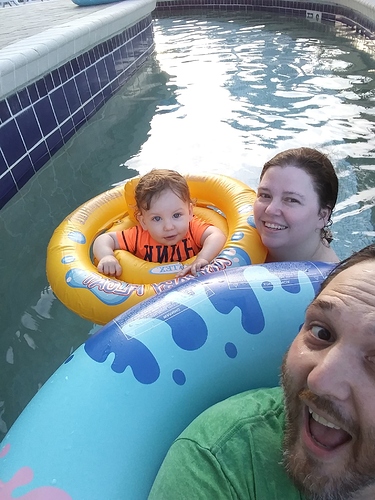 What spurred this thread was just wanting to share about Harrison’s first character interaction. We went to our local theme park this weekend and there was a short show with Franklin from Charlie Brown. That’s not a character he recognizes but at the end of the show I asked if he wanted to go give Franklin a hug or high 5 and he said yes so we lined up. When it was his turn, I said, “give Franklin a high 5” and he just walked up and pointed to his own shoe, with a grunt that means look at that. I just thought it was so funny. He wasn’t interested in contact but got pretty close, so it got me excited at the potential for meet and greets.

I made a leading reservation so that I could get O’hana on our first night. Tomorrow my 60 day window for that opens up, and I’m going to use it as a trial run, then dump the fastpasses. I’m so excited! I haven’t used the current fpp system so I’m glad I’ll be able to play around with it before my real window opens.

We invited my stepdaughter (Julianna) and her friend (Kayla) to go, but I always kinda knew Julianna would probably back out so I tried not to get my hopes up too much about it. They are 20, so I told them to buy their own tickets and they can ride down and stay with us and I would pay for their food. In a weird turn of events, Kayla is still going to go with us even though Julianna is not. She’s been around all the time for years, so it’s not THAT weird, but I expect it might be a little awkward at times. I’m excited that Matt and I won’t have to ride all the bigger rides alone though! I don’t think Harrison will reach 36" by then.

Both of my boys love Blippi. It gets old very quickly. Especially when the excavator song is stuck in your head!

I hope you have a great trip. We are also going in October.

It does, I actually like the boat song though.

I just had to comment that my sis, reconnected with her high school sweetheart on FB after marriage, 2 kids and divorce and they are now married and blissfully in love with each other. It’s really cute!

OMG - those Excavator and the Dinosaur songs! My DGSs sing them ALL the time!

I would think her friend wouldnt want to go after your stepdaughter dropped out? But I guess you cant say no to a trip to disney?

Have a fabulous trip …we will be the a couple weeks after you!

Here is how much Harrison currently enjoys rides: 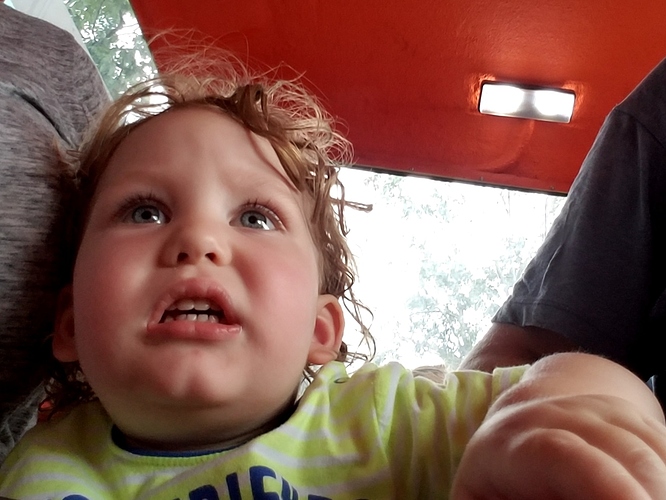 This was a very mild kiddie land ride.

I dropped my laptop and broke the screen last week, and while I’ve been reading the forums some from my phone, I haven’t been able to really get my disney planning fix for a while. I ordered a replacement screen on Amazon and my boyfriend was able to put it on, so it only cost me $30, sweet!

I also went to my local waterpark last Tuesday, the day before my fastpass day, and took my waterproof phone into the pool to take pictures, as I’ve done a few times before. This is the first time I then got a notice upon plugging in that water was detected and to unplug charger until dry. So, thankfully I had my “practice” fastpass run the previous week. I intended to cancel them and rebook on my real day, more because of fear of losing them + Kayla didn’t have her ticket yet, but I was able to either add her to our party or get overlapping times for hers for all, including FEA, SDE, 7D, and FOP. So, Papa don’t preach, I’m gonna keep my baby.

AND!!! Today I booked a Star Wars dessert party. I’m not a SW fan, but I am a fireworks fan and have always wanted to do a dessert party. The others are huge SW fans and I’m going to see if I can keep it a surprise, but I’m not very good at that.

Matt, who has never sewn, took on making a jedi robe for our trip with my mom’s help. And he got a kyberlight saber today. Excuse the living room destruction. 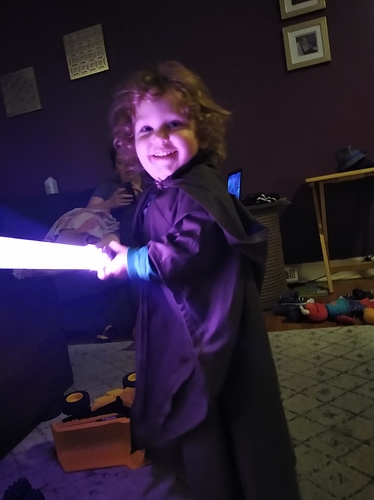