Hello, out there! I have been on Lines chat more than the Forum lately, but I hope you guys will still enjoy the report from our family’s latest trip to WDW. Notable about this trip:

Multi-generational: Trip included DH and me (40-something), DD12, DS9, and DILs. We’d traveled together to the World previously in 2012. The four of us in my immediate family had been twice in the interim. 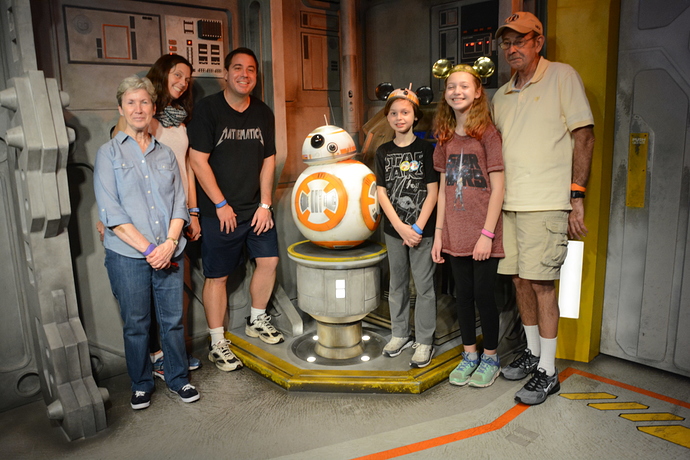 Football tie-in: Our family are Virginia Tech football fans. We saw the Hokies in the Camping World Bowl December 28. We planned the whole trip in a month once we got the word the team was going to Orlando. We stayed December 26 - January 1, so we made a vacation of it!

First Time Offsite: By the time we booked, there was no room at the inn (well, at the onsite resorts) for this popular travel week. We snagged rooms at the Disney Springs area B Resort and Spa. The rooms were nice and the location was good. The price was amazing compared to Disney resorts. That said, I think we’d return to onsite anytime there was availability. We like the feel, and we like the Disney transportation, especially to MK. But I could see staying offsite (and at the B) if our trips ever became more frequent.

More to come! Thanks for reading!

Thanks for the report! Do you think FPs and EMH will make the B more desirable?

I know the feeling about offsite versus onsite! We were there at the same time (12/27 - 1/1) and we too planned the trip late so no Disney Resort rooms! We stay at the Hilton Buena Vista Palace at Disney Springs! We were missing the extra magic hours, dining plan and Disney transportation! No magic bands either!

I’m looking forward to reading your experiences and everything. I loved being down at WDW over Christmas. It was amazing time of year.

Thanks, @missoverexcited! I hope to get into more of it today.

@PrincipalTinker, I think if the prices stay the same, those perks really sweeten the deal (and help address the problem of nothing available onsite during peak time). We planned our trip before that policy was announced, and it started the day we checked out, so I am just speculating!

Agree, @parsonsrt! We missed having the buses most of all, especially on our MK days!

Thanks for reading, @davidjjenkins1961, and glad you enjoyed your trip!

Excited to read! I’m three weeks away from my trip!!

We arrived late into MCO on December 26. Months before (yes, before we had a trip booked!), I had snagged a pre-rope drop breakfast at Hollywood and Vine for December 27. The kids wanted to do Jedi training (DD12 in particular, since 12 is the oldest you can be), and this ADR seemed like the best way to sign up. But I think we were all questioning the wisdom when the alarm went off. 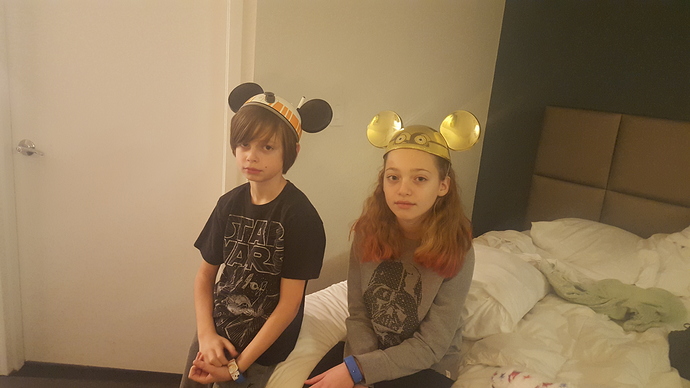 December 27 was crowded at the parks, but not insane (crowds for the rest of our trip, in my scientific opinion, were insane

). Also, December 27 was a textbook perfect weather day. Sunny, high of 75. Plus, Hollywood Studios has a lot going for it where my family is concerned. We love all the (4) rides that are open. We love Fantasmic and all things Star Wars. The park is smaller, which means a less stressful touring plan for me, the planner, and less walking for the in-laws. All in all, this was a great day!

It was fun to breeze past the crowds at the gate to go to breakfast. A nice CM took this picture with my phone in the empty park. 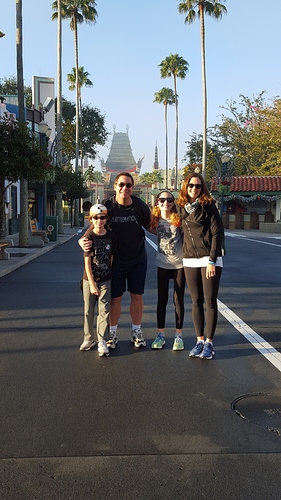 We signed up for our Jedi Training show in just a minute on the way in. Breakfast was good (love the Mickey waffles and tater tots). Our server was very helpful and did not rush us, but got us the check promptly when we asked for it. My kids are 9 and 12, so they hardly remember the Disney Jr. characters they were meeting (and that was not our main objective, but yet, there they were at our table!). I did think it was nice to see Handy Manny again. 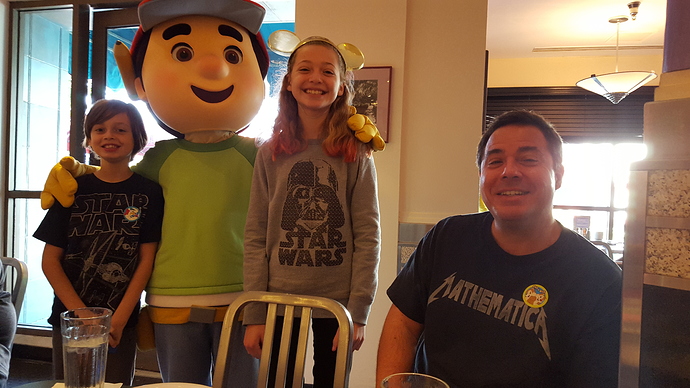 We got out in time to ride Rock and Roller Coaster (DS’s favorite ride) by around 9 with only a short standby line. 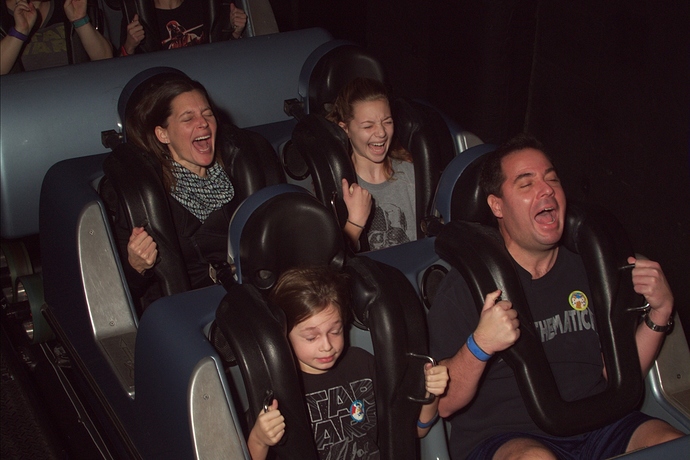 A word on planning for a big group in high crowds: I made sure every person’s favorite ride in WDW had either a fast pass or a plan to Rope Drop or Single Rider the line. This, in theory, made sure that no matter what the other plans were, when we were done, everybody could say they got to do their favorite.

We caught the Beauty and the Beast show for the first time. My little theater critics weren’t too impressed, but it was my MIL’s favorite thing we did that day. Jedi Training went well. I think DD displaying no fear whatsoever of Darth Vader shows why she might be starting to outgrow this attraction! 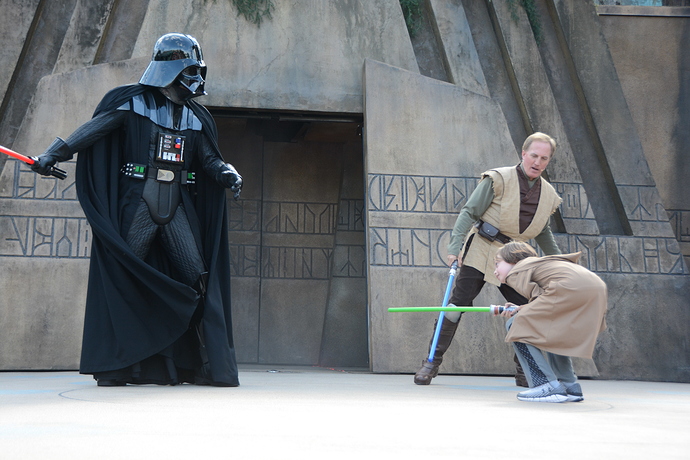 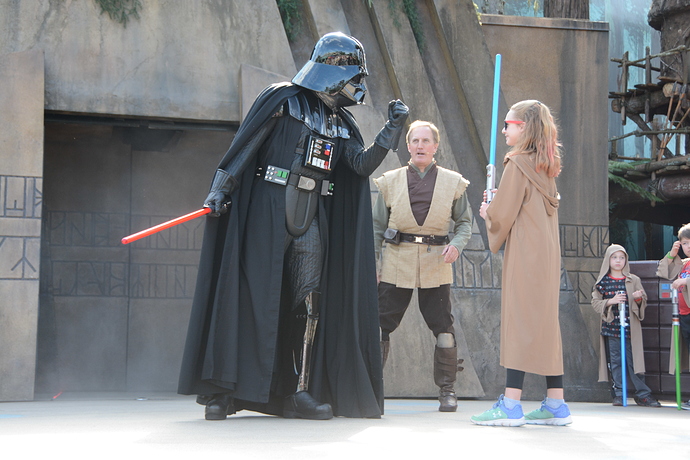 We rode Star Tours (loved the new Last Jedi scenes!), and then my FIL had to settle a score with his favorite ride, Toy Story Midway Mania. 5 years earlier, we rode this ride and he realized afterwards that he had never put on his 3-D glasses! So he thought he could probably do better this time, and he did.

We ducked into Tune in Lounge for milkshakes to go. We planned to take them into Indiana Jones, but that was not in the cards, as the theater was full every time we tried to go that day. Impressive that Indy is still drawing such big crowds after all these years!

We love Star Wars, and throughout the day, we caught the stage show and the First Order march a few times. We also went to the Launch Bay and met BB-8. I can’t wait to see Star Wars land!

We weren’t on the Dining Plan this trip, and I had planned to use the new Mobile Ordering a lot, but my phone battery was dead by the time we went to Backlot Express for dinner! Lesson learned, and I made sure this didn’t happen on future days.

We had fast passes for Tower of Terror and managed to talk my FIL into riding with us. So much fun! 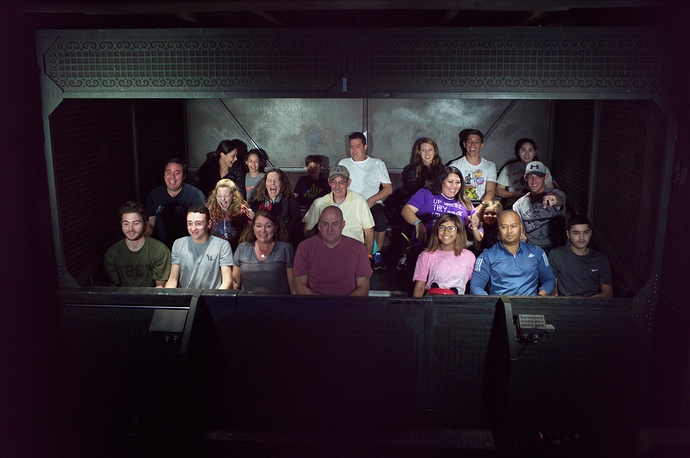 DS and DMIL sat that one out. They watched the holiday projections and enjoyed the snow on Sunset Blvd. while we rode. We finished our night watching Fantasmic in that amazing open-air theater. A perfect day at Disney World!

What a great day! Just reading about your day made me want to be there!

Great report. The a.m. pic gave me a chuckle, glad to see everyone perked up once you got to the park.

What a great day!

Glad you guys are enjoying!

It is easy to stick with Rope Drop mentality even when you are not going to a park (many of us, me included, stick to it even when we are not on a Disney vacation - at the DMV, the local mini golf, etc.!). So, rather than saying our second day was a rest day, I will say that our second day was relatively restful, since the thing we were Rope Dropping (Disney Springs) did not open until 10 AM!

The kids and I spent the early morning exploring the B Resort. They have a cool kids’ room, with a foosball table and some games, but no actual kids’ programs. There is also an official Disney store in the lobby, so we met my MIL there for some pin and ear shopping. And I may have also roped dropped the laundry room

. The laundry room was next to the pool, but as I dragged my hampers across the pool deck, I realized swimming was out of the question as we were no longer enjoying temps in the 70s. It was cloudy and 60 at best on this second day, a trend which sadly continued through the rest of our week. It was cold comfort (ha!) to know that back in Virginia, temperatures were in the single digits.

We rounded up our crew and headed to Disney Springs for an early lunch and some shopping. 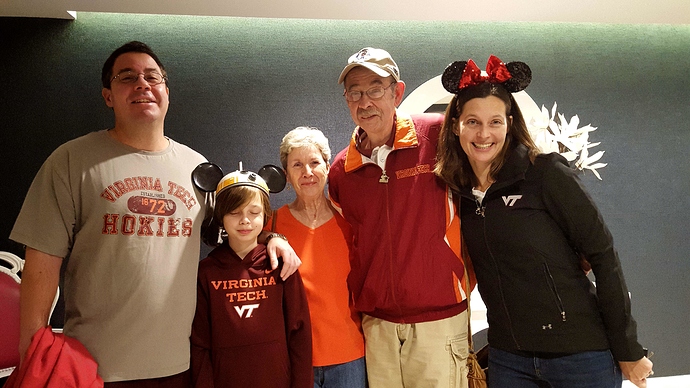 Disney Springs is really nice, and in the early part of the day, the parking and crowds were both very manageable (Rope Drop for the win!). We had heard good things about both Deluxe Burger and Earl of Sandwich, but could not come to a consensus. Since Deluxe has Mobile Ordering, we placed a to-go order there and brought it to where the rest of our group was eating outside at Earl. We all liked what we had. DD’s burger with melted Gruyere from Deluxe made me wish I was not eating a healthy salad from Earl, but since dinner was going to be eaten in a stadium, I wanted to pace myself!

Earl of Sandwich is right by the Christmas Tree Trail (also an interactive fountain, but it was not nearly warm enough for that!). It didn’t open till noon, so we explored the toy store until trail Rope Drop! 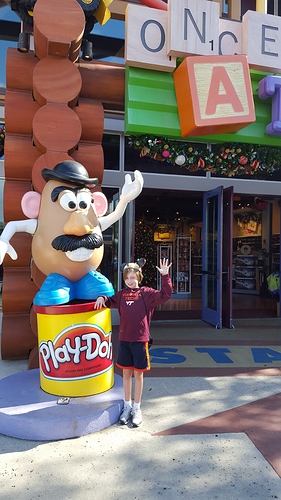 The trail was cool - each tree was such a detailed tribute to its movie or character. I recently got the Pinterest app, mostly to look at Christmas decorations and Disney outfits, and the trail felt somewhat like walking through real-life Pinterest! Here is DD by the Peter Pan tree. 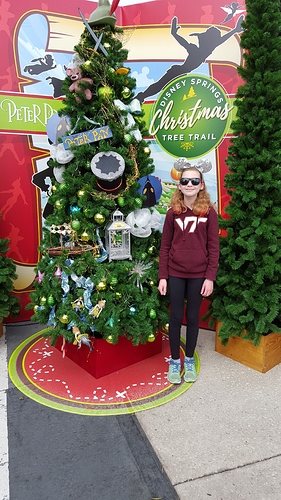 We did some shopping at World of Disney (I expanded my collection of Disney dish towels!), and then treated ourselves to Ghirardelli sundaes. By this time the sun was out, so we soaked it up while we could. 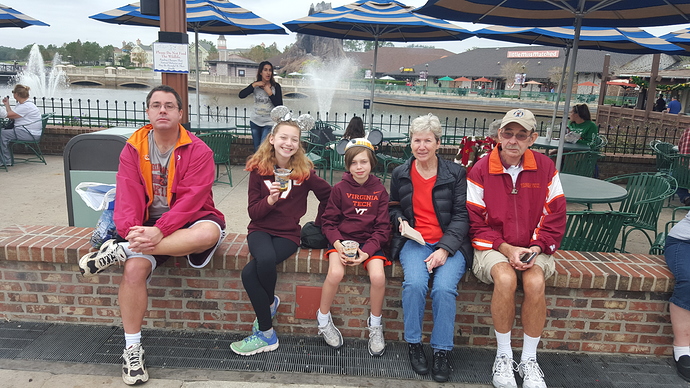 We went back to the hotel to rest, and had a fun (but chilly) night taking in the game at Camping World stadium. It is always fun when our loves of VT football and Disney collide at a game in Orlando!

Thanks! I do not think I saw any reports about the Christmas Tree trail this year!

You’re very welcome! I had read about it somewhere, but if we had not eaten at Earl of Sandwich, I would not have remembered to go.