Trouble breaking up group for FP

I’ve done this twice before, but this time it seems like it’s impossible to figure out how to do our FP for my group of 6. The other times it was clear: my DD2 would stay with me and do kiddie things with the senior in our group while my husband took the two boys who were much older on bigger kid rides. Many times we were all 6 on the same ride. But this time I am at a loss b/c DD is almost 8 and probably wants to do what the boys are doing…except some rides I think she shouldn’t go on. She is massively tall for her age and can ride anything. I can’t ride even mild coasters and our senior friend can’t either. But I don’t want to ride things without any of the kids the whole time…I’m ending up with lots of “4 on this ride while 2 are on this ride, but then the next time 3 are on this ride while the other 3 are on that ride” type scenarios and it’s getting so complex that I don’t see how I can sit down at the computer and do the FP without messing up multiple times. FP window opens in 2 weeks.

If it was me I would make a spreadsheet listing each day and the Fastpasses with time I was hoping to have for each person. For example (in this I just made up FP+, I’m not sure whether all of these rides like Triceratops Spin actually have FP+ but this gives you the idea of what I mean): 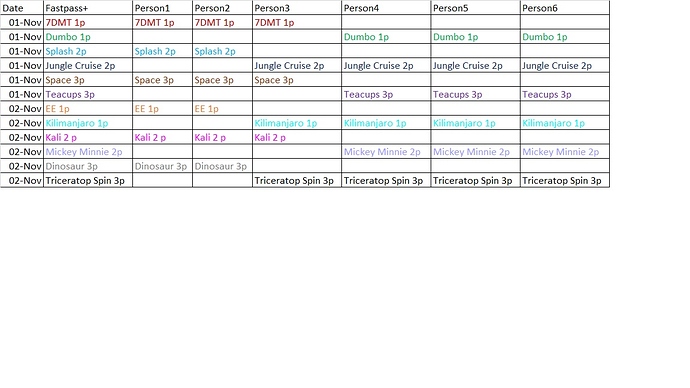 Step 1.jpg1152×648 125 KB
Then I would insert a column to assign a priority to the FP+ I wanted so that you search for the hardest to get FP+ first on your FP+ morning (note: your actually order of priority may vary, I just assigned these numbers to give you the general idea of what I mean): 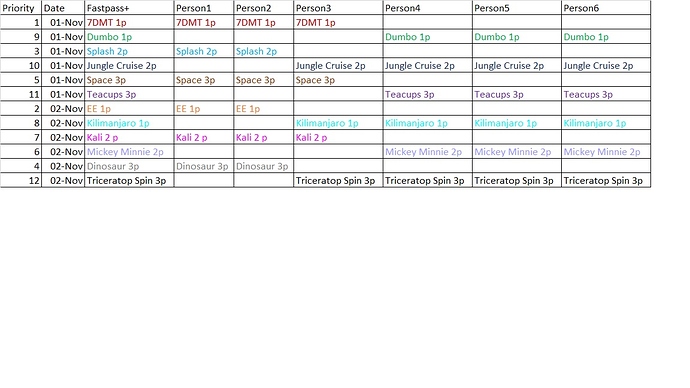 Step 2.jpg1152×648 131 KB
Then I would sort my spreadsheet by Priority and there’s your list for FP+ morning with the order you look for your FP+ and which people to assign them to: 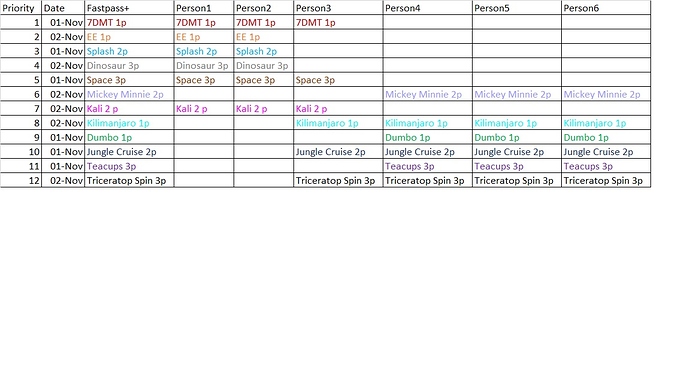 Other than Primeval Whirl and Rockin’ Roller Coaster, what other rides do you think she shouldn’t go on???

I guess I’m having trouble understanding the issue.

I personally don’t see any issue with a 7yo riding any ride they’re tall enough for, but I can understand not wanting to be left alone all the time.

What are the ages of everyone involved?

I’d just do rider swap for everything. It would ensure everyone who wants to ride gets to ride.

So if the group of 4 wants to do, say, SM, 7DMT, Splash, DW and the “senior” wouldn’t and doesn’t necessarily want to do rides without the kids…

I think my rec would be to do what @NoCapes suggested, but determine if OP and the senior wants to actually do rides while the group of 4 is on the thrill rides or if they should use that time to shop, get food for the group, etc. If what she’s concerned about is not experiencing any attractions without the group, then she needs to build a bunch of rides in to her TP without the use of FP

My daughter could probably do all the rides. I’d hesitate at space mtn mostly. She is very daredevil but I don’t want to put her on something she can’t handle and then have a sick /terrified kid the rest of the day. But the main problem is just the complexity of all these people doing different things and it hurting my brain.

Thank you for the spreadsheet suggestion. I’ve rarely used a spread sheet even in my work…but could probably make one easily, I know that’s on my computer.

Space Mountain is pretty tame, all around. A little rough, perhaps, but totally doable by an 8-year-old. She’ll likely love it.

Why not just schedule everyone for FPs, but if anyone decides not to ride int the moment, just tap in and then the non-riders go do something nearby. Since it is a FP, probably only have to wait on the order of like 10 minutes for most things. For Space Mountain, for example, easy enough to go hop onto People Mover while the others ride, etc.

I mean, you could try to hyper-coordinate it all, but I think that might spoil some of the fun, personally.

This is what I would do - particularly since the majority of people in the party seem to want to ride the FPPs that are harder to get. Just book everyone and then if someone doesn’t want to ride, they don’t have too.

I also second the comments about SM. At 8 I rode everything, even at amusement parks where rides aren’t family friendly. SM is still a family friendly coaster. I’d be more concerned about RRC or EE, but wouldn’t hesitate to send her off with a smile if she wants to ride.